Artist Sam Bailey has won the HIX Award with his painting Smoker 3. He has won £10,000 plus a solo show at HIX ART in 2018, as well as the opportunity to design a limited-edition silk scarf for Turnbull & Asser.

Bailey is a London-based artist who recently graduated with a BA in Fine Art from Central Saint Martins. His winning painting, Smoker 3 (2017), is part of a series depicting images of activists and protesters based on archival photographs from the 1980s. Painted with thin layers of watercolour onto newsprint paper the work evokes a sense of memory and the passing of time, whilst also referencing the act of protest in the pre-digital age. The newsprint also acts as a signifier of the handmade and make-do approach of the 20th century, which many of the activists depicted on its surface deployed during their occupations.

The runner-up prize went to Ella Husbands for Embodied Distortion (2017), an immersive piece aiming to alter the viewer’s sensory perception, and thus connect them with the artist’s personal experience of sensory distortion brought about by the early stages of Chronic Fatigue Syndrome. Husbands received her BA Fine Art from Central Saint Martins in 2017. The People’s Choice winner is London-based South Korean artist Doppel Kim for Promiscuity of images; the image is always light years away (2017). Kim is a recent graduate of the Goldsmiths MFA Fine Art course, whose work concentrates on contrasting different characters of painting and digital screen, asking how painting can be understood in relation to other image systems.

This year’s prize money has been donated by the private bank Coutts & Co. and BaxterStorey, the UK’s leading independent hospitality provider.

This has been the greatest year yet for the HIX Award with such a high calibre of work in the group show and among the 700 plus submissions. Many thanks to our main sponsors Coutts private bank and BaxterStorey for their contributions and my new gallery Director Sophie Harriott for doing a sterling job running the award this year.

Bailey’s piece Smoker 3 is a visually quiet piece that stood out against strong competition. It is confident but subtle and illuminates the gallery with its ethereal glow. Congratulations and huge thanks to all of the young artists that took part this year, they have bright futures ahead!’

Past winners of the award include Nicholas Permain, Felix Treadwell, Ally Mcintyre and most recently, Joshua Raz 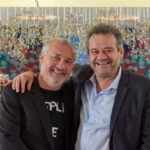 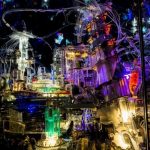 The Top 5 Art Exhibitions to see in London in March include Mars, insects, skyscrapers, jet fuel and ducks.

The organisers of the HIX Award, the annual art prize set up by the restaurateur and author Mark Hix, are delighted to announce that this year’s main sponsor will be Hauser & Wirth.