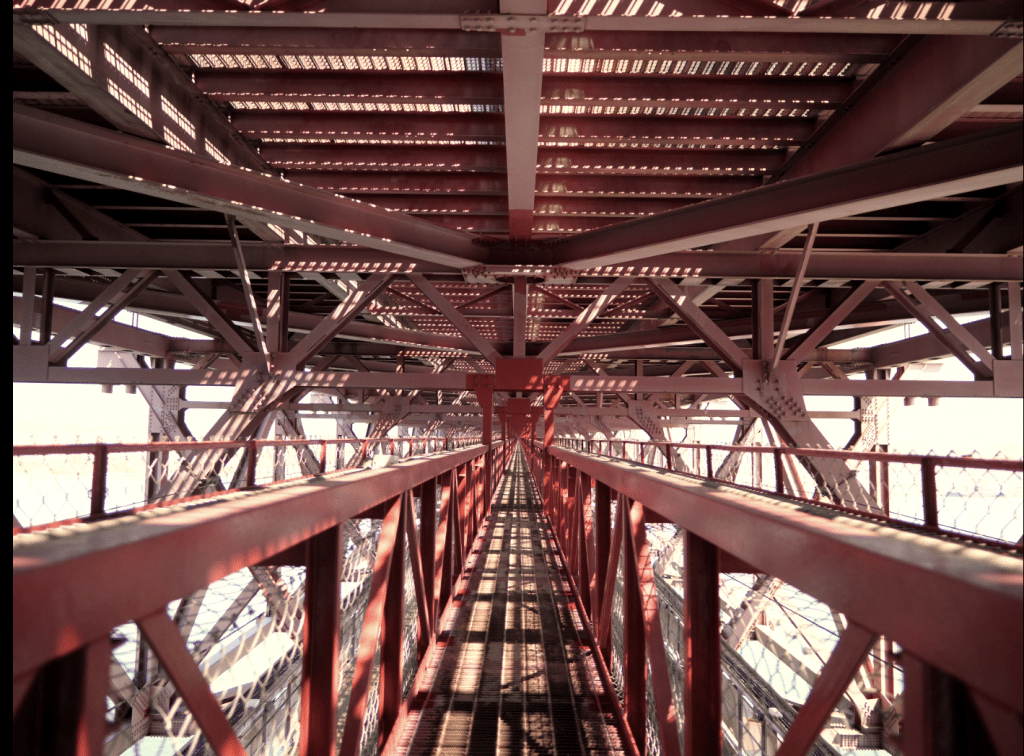 It’s a year since MAAT opened its dazzling curvaceous gallery on the banks of the Tagus river, simultaneously bringing wow-factor to Lisbon’s architecture and art scene. But from it, you can see an even bigger Lisbon icon, just 1.4km upstream – the Ponte 25 de Abril, or 25th of April Bridge. To headline a bill of Autumn shows running into 2018 (see below), MAAT commissioned the legendary San Francisco-based sound artist Bill Fontana to create an installation about the bridge. His live-streaming audiovisual composition is more than a portrait – quite simply, it transcends physical reality and immerses you in something with mystical power. The work opened this month and is called Shadow Soundings.

The name comes from the effect of vehicles passing across the vast 2.3 km suspension bridge, opened in 1966, of which over a kilometre is strung between its two 190m-high support towers. Railway tracks were opened through them in 1999, but the upper deck is for road vehicles, which shoot out across its steel grid surface. If the road surface was asphalt, you wouldn’t see the shadows of vehicles from underneath, and you wouldn’t hear the sound they make — an intriguing, insistent drone. ‘I was interested in this sonic presence’, says Fontana. 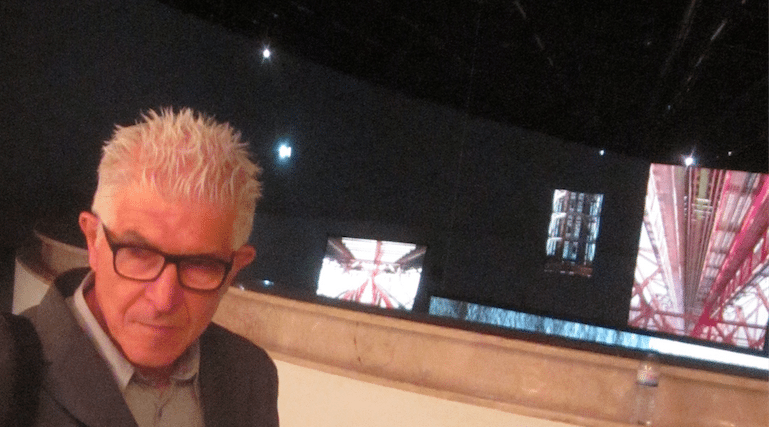 He started making sound sculptures in 1976 and has since worked around the world on subjects from Japanese bells and German pigeons to Arabian deserts and MAXXI in Rome. But, he told me in Lisbon, he has ‘always been interested in bridges’. The first he worked on was in 1983, when he relayed the sounds of the Brooklyn Bridge to the Twin Towers. Since then, bridge projects have included a sound installation of London’s Millennium Bridge for Tate Modern in 2006, and several at the Golden Gate Bridge, which is similar in scale and colour to 25th of April . Its sound, however, is very different to Lisbon’s — the Bay-spanning bridge is ‘rather silent’, he says, and uniquely, ’the one thing is fog horns’./span>

Fontana made seven visits to Lisbon over 18 months, and climbed all over the 25th of April  bridge. Good job he doesn’t suffer from vertigo. The installation that results fills MAAT’s Oval Gallery. Seven video screens hang in the darkness of the double-height space, some fed in real time through an optical cable connecting MAAT with the bridge. From 34 loudspeakers comes an electronic mix of 10 live sound channels, including an underwater hydrophone. A few beanbags invite you to lie on the floor and lose yourself in the work. You are in a space that is deconstructed and dynamic, underlined by an extraordinary, unworldly soundscape. 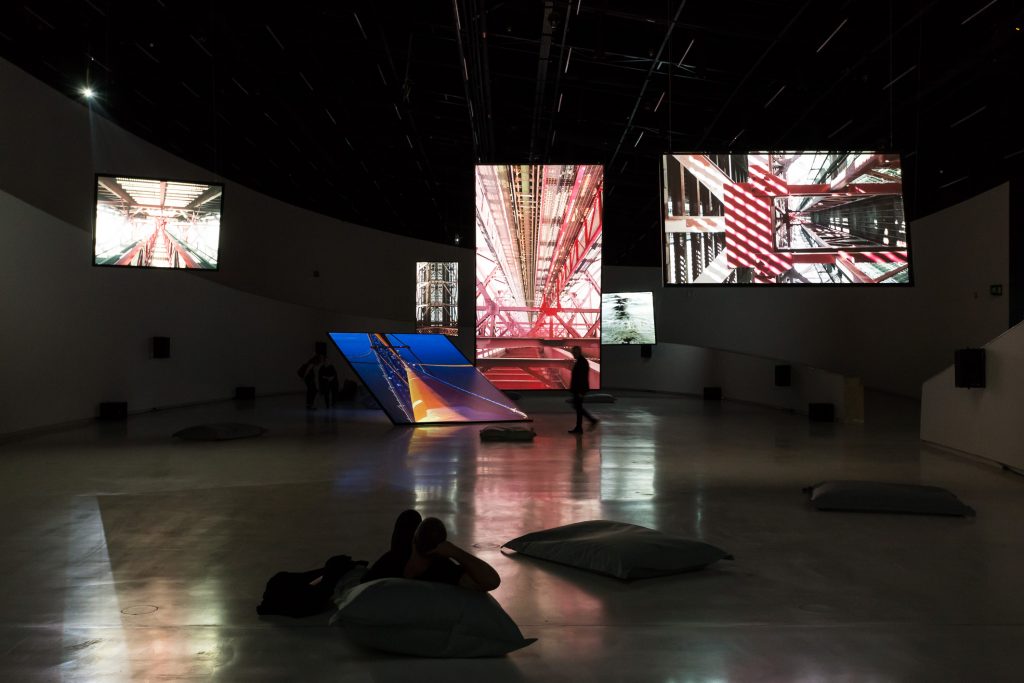 This sound runs with a 24-minute cycle. From a passage where water gurgles and splashes, that droning sound emerges and rises in intensity. Like the background noise to the cityscape of Ridley Scott’s Bladerunner, there is a sense of something dark, vast and never still. But there is also variety – when a train passes over the bridge, the rumble is low. An accelerometer at one of the bridge’s highest points deliver the lowest sounds, reaching down below what the human ear can hear, but it also picks up on precipitation – ‘a percussion sound’, say Fontana. Within the droning wall of sound, individual vehicles can sound like voices, as if somewhere in the choral layers of a György Ligeti composition or a Gregorian chant. Fontana says he achieved the undertone with experiments in his studio — ‘that one in particular was speeding it up a lot. The bridge is a singing bridge’.

The screens slice the bridge environment up and scatter the fragments, and images from within the rectilinear steel spaces subvert what is horizontal and what is vertical. Camera positions range from being trained on the water, to the top of a tower looking down along a great main cable. Inside the bridge, the rectangular shadows of vehicles zoom up from the vanishing point of a three-dimensional matrix, almost like the fleeting structures Kubrik streamed past us in the Stargate sequence of 2001: A Space Odyssey. Does Fontana recognise that particular resonance? ‘Absolutely’, he told me. ‘I felt as if I was in some kind of time portal’.

Fontana says that what he is ‘really interested in is time’. In Shadow Soundings, he has created a trans-dimensional experience of the bridge by bringing time into his visual-spatial mix — but this fourth dimension is not linear. It resonates with an insight that came to him like an epiphany back in 1976, when he was recording sounds in an Australian rainforest. On 23rd October, there was a total eclipse. He recalls that ‘the effect with the birds was magical. That moment of total silence in the rainforest was totally unique, it happens only every 5,000 years.’ From then on, he understood something that runs deep in Shadow Soundings: ‘Sound is time’, he says.

Shadow Soundings by Bill Fontana at the Oval Gallery, MAAT – Museum of Art, Architecture and Technology, Lisbon until 12 February 2018

MAAT director Pedro Gadanho not only curated Bill Fontana’s Shadow Soundings, but also Tension & Conflict – Video Art after 2008. He asserts that video is the key medium for contemporary artistic engagement with the issues of our time, and he makes a good case for it with over 20 video works (their total running time is 3.5 hours) from international artists. They all react to the financial crisis of 2008. 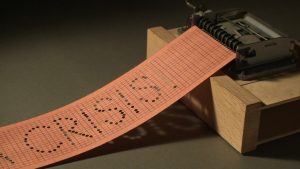 Their scope ranges from Yorgos Zois’ Casus Belli (2010), a seductive, cinematic, scene-shifting walk-through narrative across Greek society that starts and ends with a shopping trolley, to the simplicity of Jorge Macchi’s 12 Short Songs (2009) where crisis headlines are turned into tunes by a small music box (see picture).

In MAAT’s other building, the converted Central Tejo power station next door, are two more shows. Quote/Unquote – Between Appropriation and Dialogue (until 5th February) dips into the the EDP Foundation Art Collection, which collects Portuguese art and stretches back to the 1960s. It’s a bit random and fails to refer to Portugal’s transition from facism to democracy (the Carnation Revolution was 25 April 1974), but is chokka with great works across media. Finally, Daniela Aghostino has curated seven films from this years Artists’ Film International (until 30th April), the Whitechapel Gallery-initiated programme. Don’t be fooled by the cartoon camel – the show is full of extraordinary film. It addresses powerful themes, such as capitalism’s industrialisation of the planet, which couldn’t be more appropriate as the show is embedded in the vast industrial relics of the Boiler Hall itself.