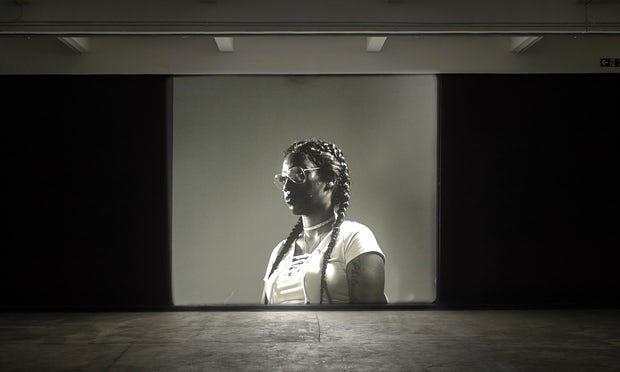 ‘The history of cinema owes black life something’ … Diamond Reynolds in Autoportrait. Photograph: Courtesy of the artist/Andy Keate

This article titled “Diamond Reynolds: the woman who streamed a police shooting becomes a Renaissance Madonna” was written by Hettie Judah, for theguardian.com on Monday 26th June 2017 16.02 UTC

Luke Willis Thompson is still shocked. “The timing,” he says, “was a little more powerful than I would have hoped for.” It is the morning after the unveiling of his portrait of Diamond Reynolds, the American whose boyfriend was shot dead by a Minnesota police officer last July – and who achieved a grim celebrity by broadcasting the aftermath on Facebook live.

Just days before the unveiling, officer Jeronimo Yanez had been acquitted of Philando Castile’s manslaughter, in a court case that had shook America. Willis Thompson, his crew and the gallery staff felt closely allied to Reynolds, and had been on tenterhooks during the deliberations. “I know I am an artist, and our relationship has been confined to this project, but I’m still heartbroken for my friend.”

They were not the only ones left in shock when Yanez was cleared of all charges relating to the death of Castile, a black 32-year-old school cafeteria worker. The traffic stop turned deadly seconds after Castile alerted the officer to the fact that he was carrying a gun, for which he had a permit. Reynolds had been in the car with him, along with her then four-year-old daughter.

Autoportrait was filmed in Minnesota in April and shows Reynolds resolute and almost motionless. Portrayed in black and white against a plain dark backdrop, she has the aura of a Renaissance Madonna or a Garbo-era movie star. The film is silent but for the clatter of a 35mm projector placed obtrusively in the centre of the gallery: to cross from one side to the other, one must avoid breaking the beam of light that carries Reynolds’s image.

Willis Thompson shows her as a formidable, complex presence. “Diamond,” says the artist, “needed to be interpolated into cinematic history – the history of cinema owes black life something.” Autoportrait is intended as a counter to the cameraphone footage Reynolds broadcast on Facebook – which was, and continues to be, widely shared. “She is recognised,” Willis Thompson reminds me, “for the worst day of her life.” He wanted to provide her with an alternative.

Born in Auckland in 1988, Willis Thompson has been drawn to explore subtle, insidious themes of racial and social injustice, among them circumstances connected to his own father’s funeral. An earlier film – Cemetery of Uniforms and Liveries – focused on two young men from London whose mother and grandmother had been killed by the police.

That project led him to make “a conscious decision to start watching videos of police violence. I felt there was some duty to look at these things. It was important.” He became fascinated by the footage Reynolds had shared, and of its global reach.

“I’m not interested in telling her story or having her relive anything,” he told her lawyer. “I’d like to make a portrait of her.” The lawyer was worried that such a work might harm the case. So Reynolds wasn’t allowed to speak on screen. Silence was fine by Willis Thompson: art was accommodating in ways that more mainstream means of representation might not be.

Reynolds was “savvy”, the artist recalls. “She didn’t have an overstated notion about the film. She knew I was this weird kid with a very small scale production.” She knew what she wanted to wear, and had strong feelings about how she would present herself in the film. Reynolds spent time behind the lens, switching places with the cinematographer to check the effects of the lighting and adjust her position.

She even seemed to look forward to the sessions, Willis Thompson says, since they broke the monotony of a period in which she couldn’t work because of preparations for the court case. But the impact of what she had lived through was always there. The artist describes how Reynolds’s daughter – “this perfect, beautiful, fun and funny child” – lay face-down on the ground shaking at the sound of a fire engine going past.

Reynolds sent him a copy of the statement she issued after the trial. “God help America,” it concluded. “It was so eloquent,” says Willis Thompson. At a moment when many others found themselves dumbstruck, “she found a way to speak.”