PEER celebrates the arrival of spring with a beautifully renovated gallery and an inaugural exhibition by Angela de la Cruz, together with two new public art commissions on Hoxton Street, in the heart of East London. These projects will mark the end of a two-phase renovation, which has seen major improvements to PEER’s space, elegantly unifying the two shopfronts of the original building into one architectural statement with a new, 10 metre double-glazed façade onto the high street. 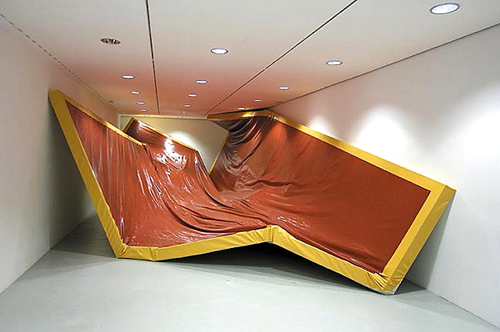 Angela de la Cruz’s presentation will feature her massive 10 x 12 metre painting Larger than Life, originally made for the Ballroom of the Royal Festival Hall in 1998. The PEER version was remade in 2004 and has toured widely abroad before being repatriated and squeezed into PEER’s more modest 5 x 7 metre gallery space. De la Cruz is widely acclaimed for her poignant and sometimes tragicomic works, situated somewhere between painting and sculpture. Her works test and challenge the objectness and authority of painting’s status by tearing, crushing and breaking canvases and stretchers. PEER will also exhibit new work specially commissioned for this presentation.

Two new public art commissions will also inaugurate the recently re-landscaped public space to the front of PEER. A four-metre high pedestal clock will be installed on Hoxton Street, with a four-sided clock face and rotating lightbox for changing displays beneath. The first annual clock commission will be by Chris Ofili, who has longstanding connections to the area. Interdisciplinary art practice London Fieldworks (Bruce Gilchrist and Jo Joleson) have designed a large-scale permanent installation made up of over 200 bird and insect boxes modelled on the social housing in the area. This extraordinary sculpture, Spontaneous City: Hoxton, will encourage local wildlife and increase biodiversity in Hackney. An editioned print and bird boxes are available for sale to raise funds for PEER.
More Info here: www.peeruk.org/spontaneous-city-hoxton/

At 6pm on Wednesday 13th January, the artist Savinder Bual will be in conversation with London-based curator and educator Amanprit […] 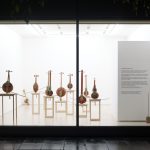 SAVINDER BUAL Ananas and the Flatfish

In spite of England’s second lockdown due to the pandemic, Savinder Bual: Ananas and the Flatfish has now gone on display at PEER.