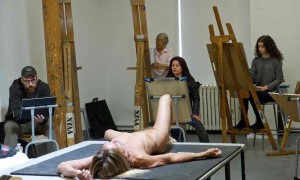 More than 20 drawings of Iggy Pop’s nude form will be exhibited at the Brooklyn Museum in New York as part of a project conceived by the artist Jeremy Deller.

The Stooges frontman served as a nude model in a life drawing class at the New York Academy of Arts on 21 February, where 21 artists ranging in age from 19 to 80 drew him. The drawings will be shown at the Brooklyn Museum this fall in an exhibit called Iggy Pop Life Class before the exhibit goes on tour.

“The life class is a special place in which to scrutinize the human form,” Deller said of the project. “As the bedrock of art education and art history, it is still the best way to understand the body.”

Deller has collaborated with musicians before, for instance for his Acid Brass project, where he engaged brass bands from the north of England to play acid house anthems like A Guy Called Gerald’s Voodoo Ray. Deller said he chose Iggy Pop for this project because it “is central to an understanding of rock music”.

“For me it makes perfect sense for Iggy Pop to be the subject of a life class; his body is central to an understanding of rock music and its place within American culture,” he said. “His body has witnessed much and should be documented.”

Pop’s collaboration with Queens of the Stone Age’s Josh Homme, Post Pop Depression, will be released on 18 March.