Daniel's Value and Ideas #94: Nobody Puts Basquiat in the Corner - FAD Magazine
Skip to content 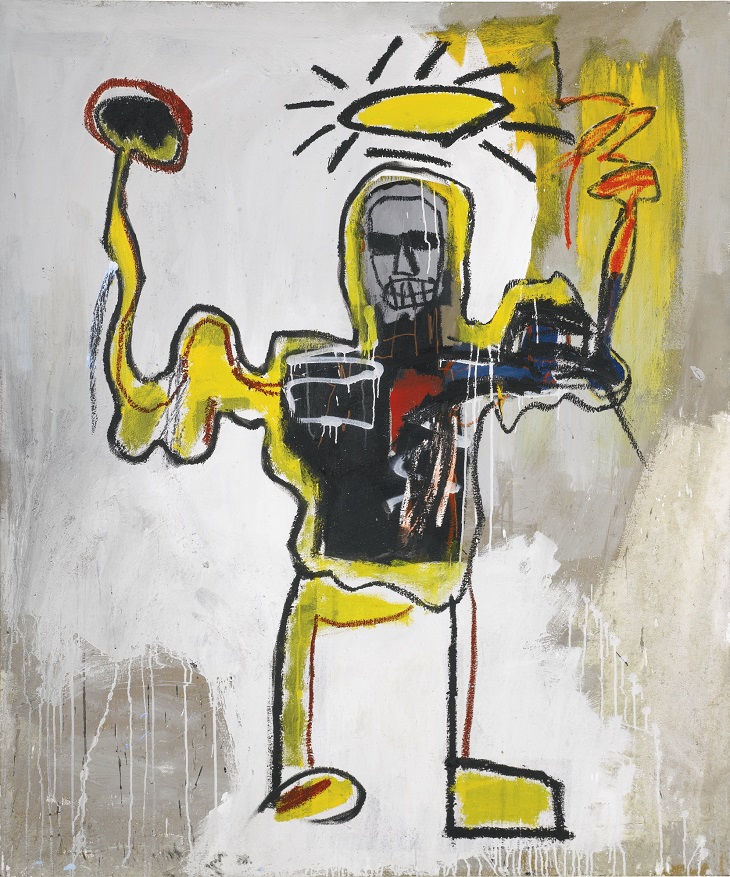 Jean-Michel Basquiat’s Untitled (The Black Athlete) (1982), which failed to sell last time it was up for auction in 2004, sold at Sotheby’s London for £4.1million during October auction week. This was a disappointing result for an artist whose auction record is $48.8million and even more so considering it didn’t even reach the high estimate of £4.5million. But it does nothing to dent the enigma of Basquiat, which has hardly been questioned for three decades.

To put the figure in perspective, £4.1million is enough to employ 197 NHS nurses for a year or to run a small car for 2634 years. I am the last person to say art is a senseless waste of money, but these figures demand an explanation, since the experience of a Basquiat pales in comparison to that of a Twombly or a Doig. Given the choice, I’d rather have 197 nurses than a Basquiat, but might just exchange 197 nurses for a Twombly if my mother and sister could be spared. Perhaps the sick are in need of something so spiritual and reverentially exuberant as a Twombly to quell the nausea of waiting lists, A&E closures and piecemeal privatisation.

The perennial question that dare not speak its name on pain of heresy is this: what, precisely, is it about Basquiat that inspires such adoration and extravagance? He is coveted and revered in equal measure, inspiring manic bidding wars in salerooms and acres of hyperbole at cocktail parties. If you look at that painting and think soberly about it, forgetting everything that everyone – especially art dealers and rich people – has ever said about Basquiat, you should have something of an epiphany. Surely nobody enjoys looking at a Basquiat, just like nobody enjoys looking at an Oscar Murillo.

Although we are well beyond the point of thinking that art is in the business of beauty, a Basquiat is, for the most part, ugly in every reasonable aesthetic sense. I say ‘aesthetic’ here very pointedly, for I am not interested in the beauty of ideas since although one might perceive ideas through visual appearances, one does not see them so vividly and in such an efficacious way as one does mere aesthetics. Aesthetics are there right before your eyes every time you look or just glance, whereas ideas simmer beneath the surface and have to be consciously teased out. And besides, this is the contemporary art market we’re talking about – nobody buys anything for its ideas, just like nobody ever loves you for your mind. If you are going to pay several million for an artwork to hang on your wall, you are surely not going to do that for something unattractive. Nobody, after all, goes to their plastic surgeon and demands to have their nose made more witch-like. On a good day Basquiat is incoherent and on a bad day he takes such gargantuan effort to unpick even the most derisory grain of sense that one rather wishes one hadn’t bothered being alive.

Owning a Basquiat is a status symbol, a badge for people who want you to know that they are members of the Big Money Club. These people do not look at their Basquiats any more than David Cameron looks into the eyes of the poor, and for the same reason – they do not want to see the mess before them and be compelled to think ‘what have I done?’. People do, however, like to look through their Basquiats at what is behind the picture, which, in learned circles, they call ‘context’. When you look through a Basquiat you see the dazzling mythology that surrounds him: he lived fast and died young, rising from underdog nobody to king-of-the-world somebody, he hung out with Warhol, shagged Madonna, spearheaded the rise of street art and fired up the engines of the 80s art boom. Somebody, they think, so drenched in the cult of celebrity, rock legend and art historical folklore must have made good paintings. If you shut out the noise from the enormous myth that surrounds it, you’ll see that the painting before you is at best OK.

Basquiat is a prime example of what happens when the cult of celebrity takes over and we cease to see art principally in aesthetic terms. The myth of celebrity is so strong that we cannot see in this case that the paintings are, in and of themselves, of fleeting aesthetic interest. The artworld creates economic value by weaving myths, which worked a treat for Basquiat, for it drove up the prices, but it also became an official line in the cultural value of the work. There is no doubt that Basquiat is art historically important or that he is a fascinating character, but when I look at one of his paintings, I feel these truths have lodged themselves between the painting and the eyes of the people looking. With eyes blinded by myths, staggering sums of money change hands, leaving ruptures in the texture of critical art history that will grow and grow so long as money speaks louder than aesthetics. It’s time to put Basquiat in the corner, shine a spotlight on him and to consider how art – drenched in money – is losing its religion.