FAD caught up with Nick Walker while he was finishing of some of his artwork from his new ‘Smoke series’, ahead of the opening of Moniker art Fair tonight (Thursday 15th October ). 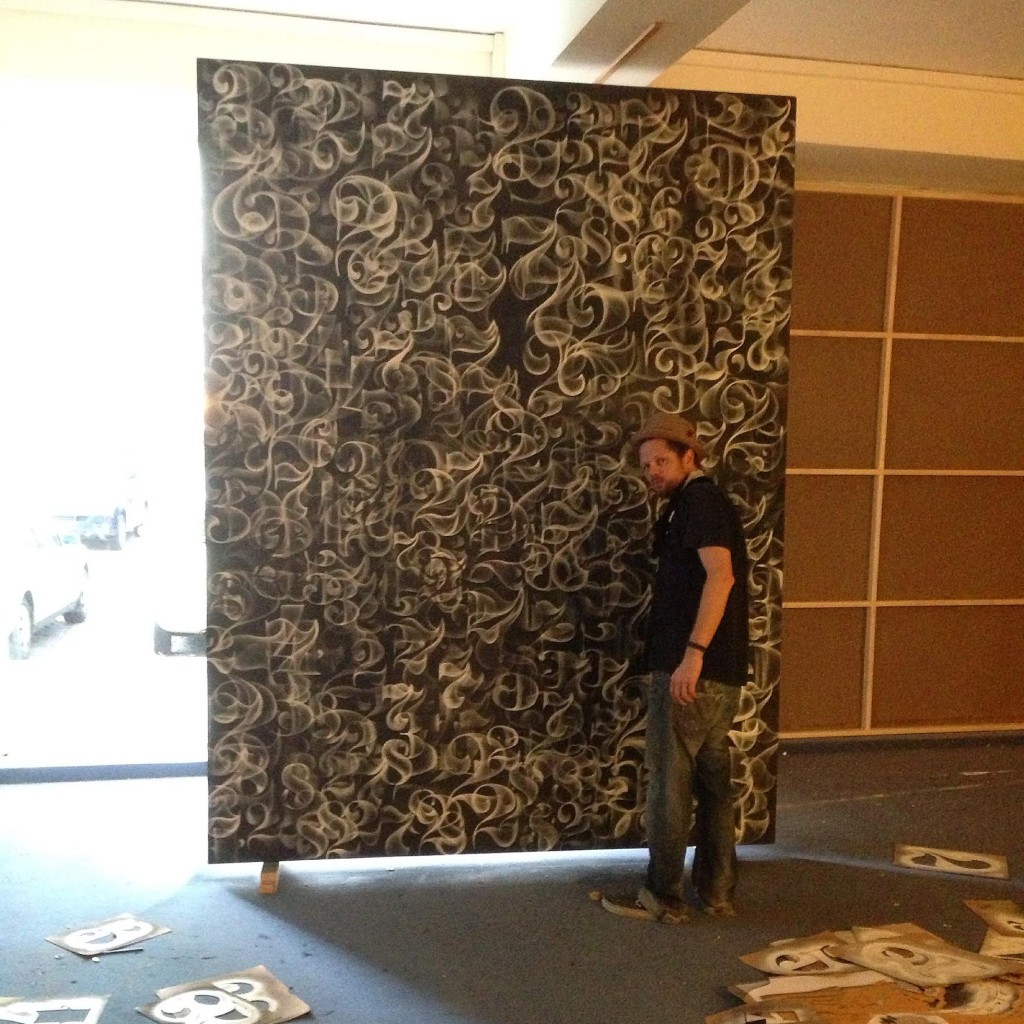 1 Hi Nick can you tell us about you involvement with Moniker this year.
It’s all about the numbers – Frankie Shea
had seen the new direction with my work and asked if I’d produce a series of pieces especially for the fair this year. It’s been along time coming as prior to this I’ve always been out of the country and haven’t been able to participate . For me this is a great way to spring board the paintings I called ‘Smoke Series’.

2 What are your thoughts on art fairs in general?
I’ve only been to Basel in Miami and that was back in 2009 – not been to one since so I’m not really the best person to ask. 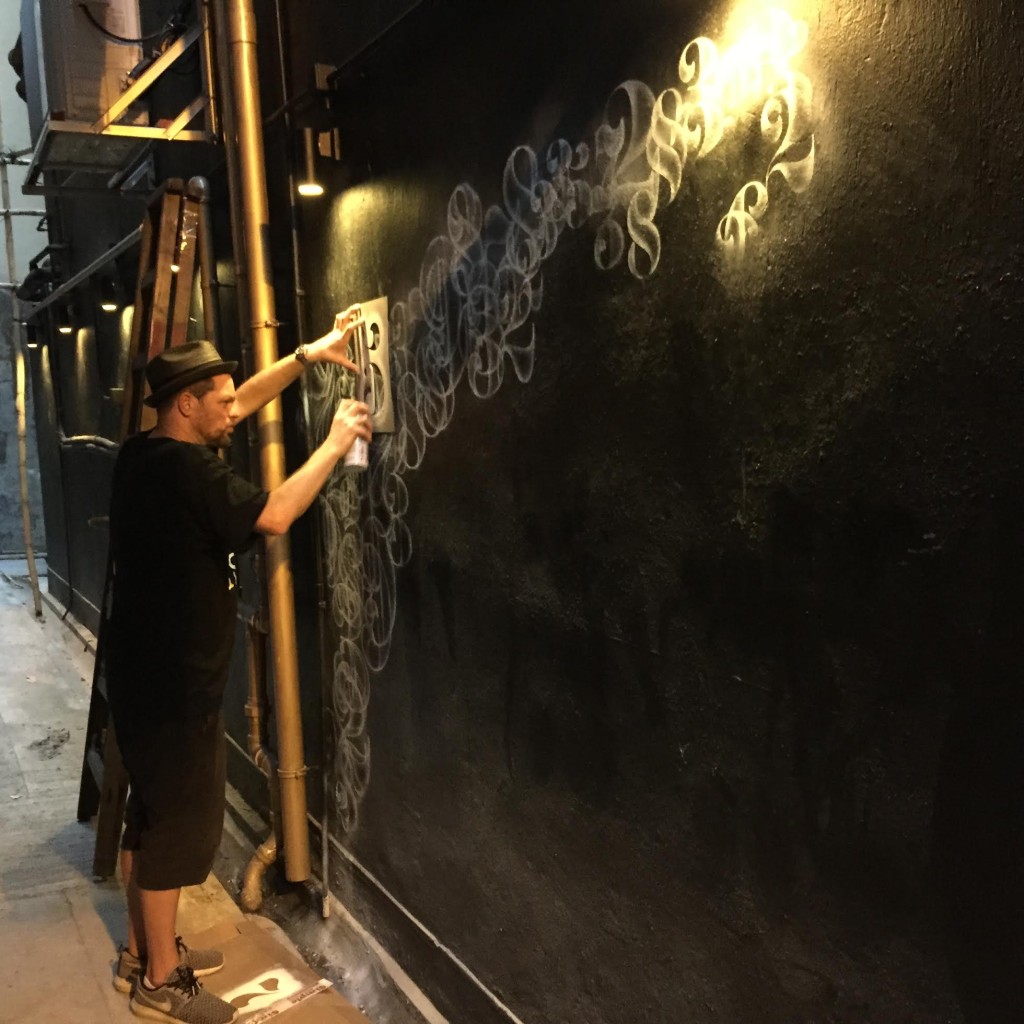 3 We hear you will be showing a new body of work at Moniker can you tell us about it.
It’s called ‘Smoke series’. I’ve been playing with numbers within some my paintings for quite a few years originally inspired by Jasper Johns. The numbers were always in the back ground but I always liked their inclusion and reluctantly painted over them with the central character of the piece. I thought it would be nice to bring the numbers to the front of the stage. I like to play with the shapes and the curvature of various numbers. It’s interesting how they fit together and create patterns within patterns.
The way I paint these is super fine so they look very transparent with the multi layering they started to look like smoke which is how the title came about.

4 Why do you think Bristol & Shoreditch have been so instrumental to the UK’s history of street art
I Don’t know- lots of like minded people in the  same place at the right time. I know in the 80’s there was only a handful of us painting in Bristol and we all know each other. Later in the 90’s more artists moved to Bristol either for college or other reasons and  stayed- thus adding to the melting pot of styles. London was probably the same.

5 What has been the highlight of your year within the art world so far
I just had my show in Hong Kong which I worked on  for same time from my studio in Bristol – lots of experimenting with new techniques and stuff. The show did pretty good too so that would have to be it.

6 What plans/exhibitions have you lined up for the rest of the year and 2016?
I’m going back to New York this month to set up a new studio and also work on some murals in the city before it gets mad cold –  I also have work in Miami Basel this year so I’ll be heading over late November. In 2016 I’ll probably spend some time in Japan on some projects and possibly a show in Dubai but that’s still to be confirmed. I’ve been meaning to do a little show in Australia and release the Sydney Morning After print so that could well happen too.

7 Do you collect art, if so, lets hear about your collection. Who do you have your eye for the future?
Yeah I have a nice collection including Osgemeos, José Parla, CRASH, She One ,Banksy, Herakut, Shepard Fairey Revok, Mad C, Logan Hicks and a new contemporary artist Pryce Lee.  I just commissioned a piece by a Spanish artist called Deih. He’s doing some really cool stuff at the moment. The good thing about being an artist is that we often do trades with each other and end up with quite a big collection. 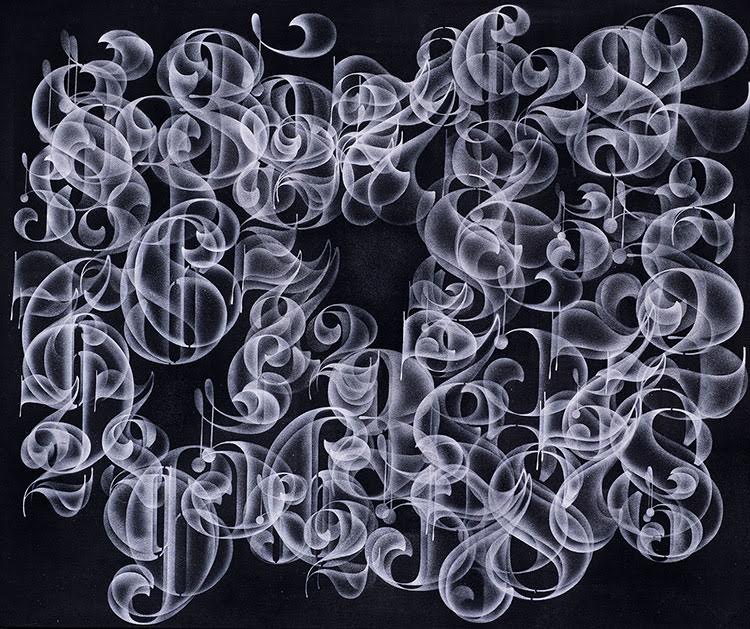