FAD managed to catch up with Eddie Peake ahead of the opening of his solo show The Forever Loop at The Barbican. 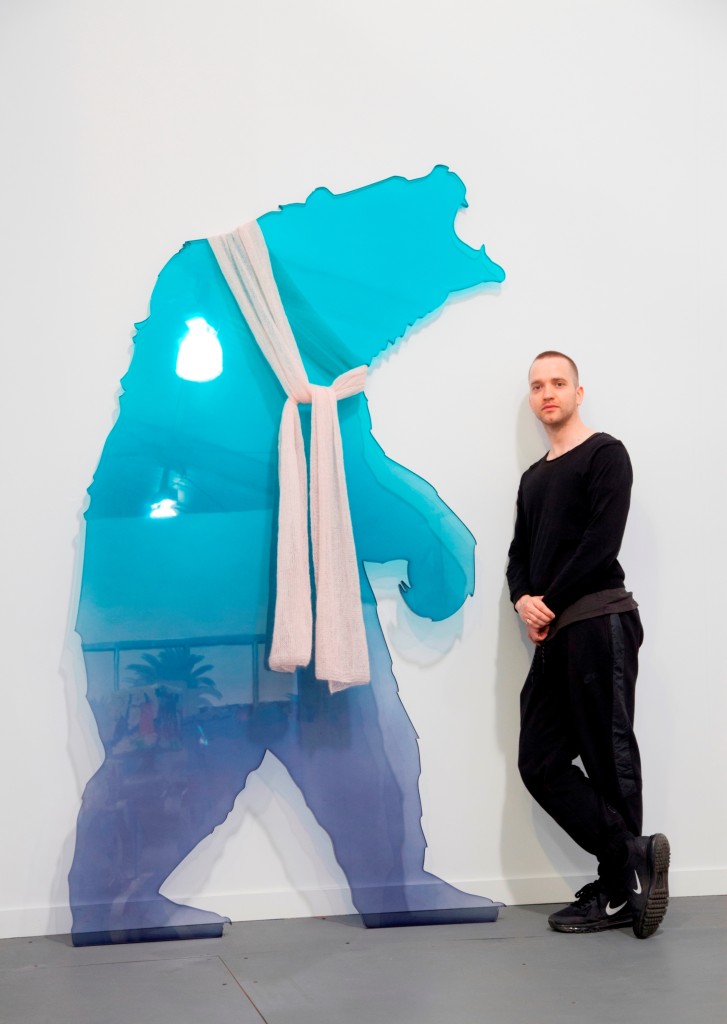 Can you tell us a bit about The Forever Loop?
I wanted to hang the show on the phenomenon of ‘the loop,’ with lots of the work making emphatic references to it. I also like that it harks to the form of the actual Curve gallery space – a space I very much like, with its inherent quality of constantly unfolding a drama. There is a number of different things going on in the show, and I want it to be difficult and episodic, and to require the viewer to really spend a lot of time with it. Having said that, I also want it to be entertaining and rewarding. There is work of different scales, rhythms and languages all co-habiting an interfering with one another, and to some extent unified and adjoined but the two performance works that happen throughout both the entire space and the entire duration of the show: one a roller skating character who glides all around, the other a looped devised work with two performers synchronised with a video loop.

How was it working with the Barbican?

I’ve loved it. The particular space I’ve been planning the show for, the Curve Gallery, is a kind of dream space for me, and one that I find incredibly generative, so the problem has been less what to show, but how to make the constant flow of ideas I’ve been having come to a cohesive and concise whole. It’s also been especially fantastic working with the curator, Alona Pardo, who has been consistently encouraging and supportive.

Do you prefer producing shows for institutions rather than commercial galleries?

I recognise that there are differences, but in terms of showing in different types of exhibition venues, I don’t particularly distinguish between them, and have never really related to people who do, so I wouldn’t say I have a preference.
How many times should people come to the exhibition? Or should they just come once but for a long time?

Ideally the viewer will spend a long time with the show, however many times they come.

About The Artist
Eddie Peake’s practice intimately connects art with sexuality. Firmly rooted in the language of sculpture, Peake’s work celebrates the body as both a sculptural and sexual object and extends to painting, installation, video and performance. His work is an often-energetic spectacle in which the absurd and the erotic each find a place, and in which the artist plays a central role. In his performances, Peake plays with idealised notions of the human form, drawing on art historical references from Renaissance and classical sculpture to popular culture. Peake’s work invites the viewer into a complex relationship of desire, sexuality and visual pleasure.