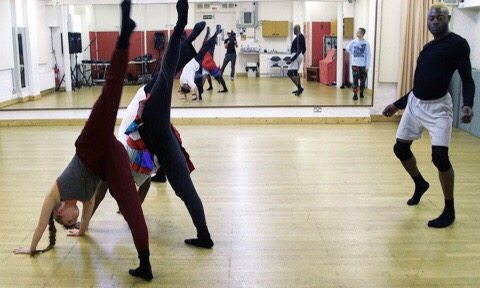 Throughout Frieze Week a new work filmed during the creation of ‘Relinquish’ is projected outside White Cube Bermondsey from 7pm onwards.Relinquish features four dancers, each locked in an individual, looping sequence of complex, choreographed movement. At certain points, two or more dancers fall into fleeting synchronisation, or interact, before diverging into their independent routines. The fifth performer is the artist, creating a live, heavily-reverberant soundscape, collaged from fragments of iPhone field recordings and voice memos. Though fragmented and abstracted, the narratives played out between the performers in Relinquish allude to power structures within relationships in the broadest sense of the word – romantic, sexual, familial, societal and cultural.

Peake’s work will have a continuing presence throughout Frieze Week in the form of a new video piece projected onto an external wall in the Bermondsey courtyard and visible after dusk 3–8 October. Filmed during the creation and rehearsal of Relinquish, the camera circles among the dancers, placing us intimately inside the performance.