Daniel's Value and Ideas #84: The Seaside Town They Forgot to Close Down - FAD Magazine
Skip to content 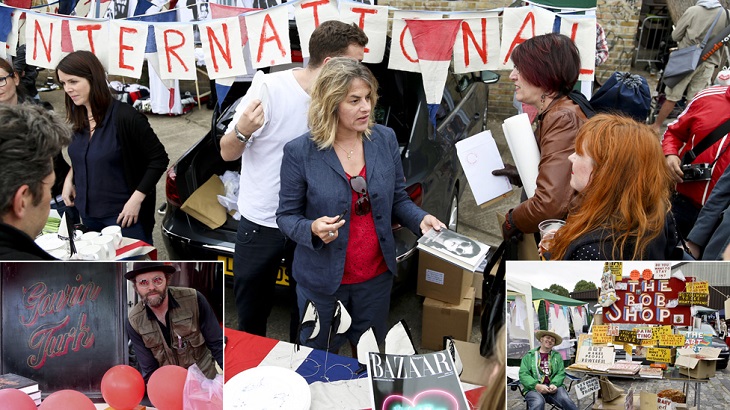 The Art Car Boot Fair, which traditionally takes place annually in Brick Lane, travels to Margate this year. The fair offers works of art at affordable prices sold directly by the artists. Regular participants include Sir Peter Blake, Mat Collishaw and Gavin Turk, but the big thrill for the first Margate outing is the homecoming of Tracey Emin. It is that rare species of a commercial venture that has not lost its lustre to success.

Back in 1994, when Shoreditch was still a slum, Joshua Compston organised the infamous Fete Worse than Death in Hoxton Square. Since this was in the dark days before YouTube and Instagram, the event subsists on a string of hazy memories, grainy photographs and relics. Gregor Muir recalls a vivid sense of hope, while a video of Damien Hirst and Angus Fairhurst dressed as clowns testifies to wild abandon. Artists, principally those who would later be known as the YBAs, set up stalls in the crumbling square in the manner of a high octane village fete and peddled their wares. Much of what they sold were prototypes of works for which they would later become famous, including, legend has it, the first iterations of Hirst’s spin paintings done on a record player with felt tip pen.

A decade later the Art Car Boot Fair was born. Its founders, Karen Ashton and her sister Helen Hayward, conceived the event as a tonic to the increasingly commercialised London artworld. Artists sell direct to the public at affordable prices in an atmosphere somewhere between village fete and car boot sale, complete with entertainment, refreshments and hijinks. It preserves the commercial aspirations of art but without the infringement of rampant capitalism.

This year Art Car Boot Fair, after its usual stint at Truman Brewery Car Park on Brick Lane in June, moves for the first time to Margate for the August bank holiday. Margate is the new Place to Be: an outpost of London gentrification whose faded seaside glamour is slowly being reinvigorated with a wave of migrants, disenchanted by London’s astronomical prices and stifling air quality, making it a kind of Dalston-on-Sea. It’s still the town of Tracey Emin’s ruin, but with cash and ambition poured in, rather like how Jennifer Lopez is still Jenny from the Block – in spirit, even if the rocks that she got suggest otherwise.

Maragate’s regeneration began with the Turner Contemporary, an ambitious and largely accomplished museum which attempts to tether the town’s illustrious association with JMW Turner to the very best in contemporary art. As we know from Wapping to Shoreditch, wherever art goes money and property developers somehow always follow. A swath of new business, opened by ex-pat Londoners, has sprung up on the seafront, selling a little slice of Hackney to the hungry people of Kent. Plinth, which one happens upon while marvelling at the Lido, sells an ever-changing curated selection of modern antique furniture, innovative household goods and art, with an emphasis on supporting local makers and creatives. Plinth does not offer a prefabricated lifestyle, but the tools to build your own, supplied by artisans for whom art and craft know no boundaries. It’s down to earth and friendly, functional and beautiful, half way between an art gallery and Steptoe’s Yard. It typifies the rise of Margate as a destination to build a life that has the style of London with the benefits of the English seaside. It is civilised, but not quaint, totally contemporary, yet never letting go of the past. This is Margate now.

And here comes the Art Car Boot Fair and, of course, the original homecoming queen, Tracey Emin. It’s a big deal. Tracey going to Margate is not unlike Christ returning to Bethlehem: they idolise her as the saviour of their rotten little town, forgetting the disrepute and controversy she ravaged upon it. The danger is that the essential goodness of the Boot Fair and the charm of Margate will be overshadowed. But nobody, not even Turner, has done as much for Margate as Tracey, who is the First Cause of all the reasons the Fair and its art-loving crowds are there in the first place. And that alone is Tracey’s honour and distinction. After all, nobody ever goes to Margate to seek out the street corner where Turner puked up a bottle of 20/20, no one hangs photos of his philandering face in their bars, and nobody lives in hope of finding the holy site where Turner strutted his stuff at the Top Spot disco.

Tracey is Margate, which is just as well because without her it is a seaside town that they forgot to close down, albeit one which is the latest outpost of London gentrification. Tracey, as the original Margate girl what did good, is there to help things along. But she is more than an accessory to publicity, she is Margate’s ambassador for art, which is better than being its ambassador for drunk and disorderly behaviour. The Art Car Boot Fair is doing a good thing by going there, not because Margate needs the entertainment, but because art – original contemporary art – should be available to everyone. Nobody who wants a Peter Blake or a Tracey Emin should be without one, and the Fair exists precisely to realise this dream and to prove that art is a social good that transcends capitalism.