David Hockney does LA again, but differently: 'I stay in, I smoke, I feel OK' - FAD Magazine
Skip to content 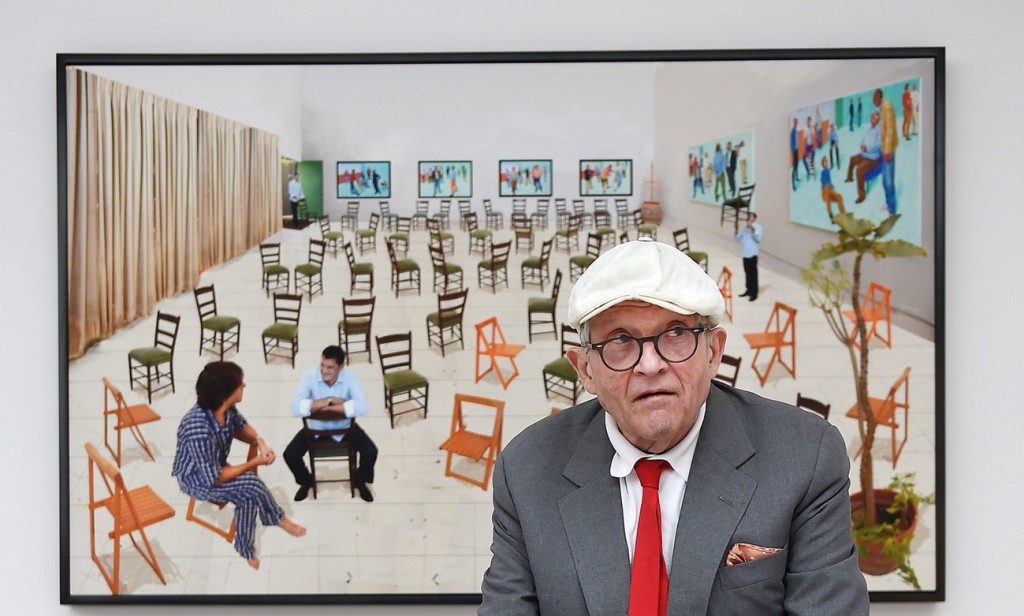 This article titled “David Hockney does LA again, but differently: ‘I stay in, I smoke, I feel OK'” was written by Rory Carroll in Los Angeles, for theguardian.com on Thursday 16th July 2015 11.00 UTC

His Californian bohemia keeps changing but David Hockney tries to be philosophical about it: you win some, you lose some.

“That’s the story of my life. It used to be you couldn’t be gay. Now you can be gay but you can’t smoke. There’s always something.”

It was an observation, not a complaint. The 78-year-old British artist was upbeat in speaking to the Guardian on Wednesday at the launch of a new exhibition in Los Angeles, his on-off home where he has embarked on a new phase of his career.

“LA has always inspired me. The light here is marvellous – much better than England,” he said, surrounded by “photographic drawings” developed at his studio here over the past two years.

The exhibition at the LA Louver, a block from the Venice boardwalk and the Pacific Ocean, attracted a scrum of US media whose reverence underlined the enduring potency of the Hockney brand.

His depictions of swimming pools and naked young men helped to define LA’s image as a sun-kissed idyll in the 60s and 70s, a period when he socialised with Andy Warhol and Hollywood figures.

Hockney may be forever associated with hedonism but these days he prefers quiet nights in his Hollywood Hills home to tearing up the city. “I don’t go out much because I’m too deaf, really,” he said, indicating a hearing aid.

“It’s a reasonably sophisticated city down the hill. It’s very nice. It’s home, really. But I’m not that interested in what’s happening outside. I like my way of life. I just work.”

It’s not all work though. He ploughs through books, watches Netflix (House of Cards, Downtown Abbey, a JFK documentary) and adapts to cuisine far from his native Bradford. “The fish and chips is not so good here. We get sushi.” He shrugged. “I like sushi.”

There are places, it turns out, where he can smoke. In the gallery Hockney retired to an annex with a sealed door to puff on his German cigarettes. When he wandered the other rooms, clutching a cane, an assistant hovered with an ashtray.

The exhibition, titled Painting and Photography, comprises portraits of people sitting in the same chair, in the same studio, set against sky-blue walls. Each portrait comprises hundreds of images captured at close range which are then stitched together, producing striking perspectives and a 3D effect.

“Technology has always altered pictures,” said Hockney, who believes the old masters used camera obscura techniques. “Now you have digits. You can do amazing things with them. The digits have freed us. We don’t know what the future will be like but we do know it’ll be very different.”

He moved back to England in 2004 for what turned into a decade-long residency in Yorkshire painting hyperreal landscapes. Hockney suffered a stroke in 2012, since when, he lamented to the Guardian in May, he hasn’t “had a really good hard-on”.

His creative burst since returning to LA in 2013 has focused on portraits of friends, studio assistants and visitors, plus his garden.

California’s blistering four-year drought is changing a landscape Hockney once immortalised but he feels no urge to get out and capture the parched browns and ripped-up lawns. His garden in the Hollywood hills, it turns out, has cacti and is drought-resistant.