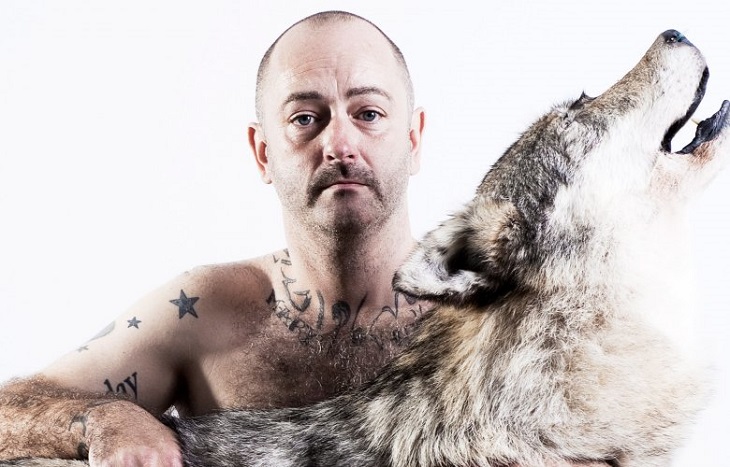 According to the sensationalist headline in the Independent on Wednesday, Douglas Gordon had gone ‘on an axe rampage after receiving poor reviews’ for his new play at Manchester’s HOME theatre. For one chilling moment we wondered if the strain of being one of the lesser YBAs had finally overpowered him, or if perhaps he suddenly regretted that ghastly Pace show with James Franco. Although Gordon hails from a moment in British art when shock and awe was the order of the day, it was unbelievable: surely that gentle Scot with a well-documented taste for Hitchcock’s Psycho didn’t suddenly go all Frank Mitchell.

The fact that the story seemed so outrageous indicated that what actually happened was – as it always is with the YBAs and the media – quite innocuous. And when a story stinks of exaggeration like this, normally it’s a ruse to sway you towards an irrelevant or spurious point of view. After all, the famously free British press – which is exclusively dominated by Old Etonians and filthy rich media tycoons – is every bit as skilled in slanting a story in the direction of its own interests as the next North Korean despot. We saw this recently when the BBC wanted to play down a brutal 20-minute verbal and physical assault by calling it a ‘fracas’.

So what happened? Last week, Gordon premiered his new play, Neck of the Woods, a retelling of Little Red Riding Hood at the HOME theatre as part of Manchester International Festival. It received poor reviews, with the Guardian concluding it was ‘all style and no fangs’ and the Telegraph dismissing it as a ‘vanity project’. In response, Gordon took an axe to a concrete wall. Yes, a non-sentient, rock-hard, built-like-a-brick-shithouse concrete wall – not a person, or a group of people, or an expensive fixture, still less an entire theatre. In actual fact, the damage caused was little dent in the wall, a miniscule fission in the fabric of the aimlessly ready-to-hand wall by the sublime presence-to-hand of an axe. It was, as a brave knight once said, merely a flesh wound. Then, to add insult to injury, he drew wolf hand and signed it, thus giving the theatre its very own original Douglas Gordon artwork.

So ‘axe rampage’ turned out to mean ‘dented a concrete wall with an axe’, but it doesn’t have the same ring to it. After all, when you’ve got an agenda to pursue at any cost, the cold hard facts need a little embellishment if they don’t quite suit your purpose. Dressing up the truth also possesses remarkable expediency, such as when ‘poses no immediate threat’ had to be dressed up as ‘has WMD and is ready and willing to use them’. 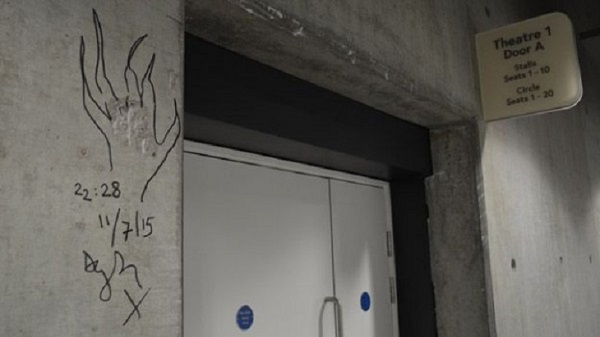 The wreckage of Gordon’s axe rampage

So Gordon was cast as a selfish, reckless, vicious, loony artist Gordon for daring to cause damage to the recently redeveloped (at a cost of £25million) asset to the community and beacon of culture in the North that is the HOME theatre. (And let it be duly noted that ‘HOME’ is a stupendously lame name for a theatre). The press needs villains and heroes, and it found them here in the shape of a has-been artist and fancy theatre complex. If they’d told the real story, Gordon would not be a villain, but only an idiot, and the theatre would be less of a hero than a theatre with a tiny bit of concrete missing, and idiots and tiny bits of concrete do not make news or cause moral outrage. Gordon shouldn’t have done what he did, not least because he should be able to take a bad review, but no one died, no essential infrastructure collapsed and the sun did not explode.

The reasonable expectation is that he would be subject to the same laws as everyone. But in a society where the few are the exceptions to the rules expected of the many, Gordon is a member of the elite of British art and is therefore immune to charges of criminal damage. If one of us went at a building with an axe we’d be hauled in on charges of criminal damage, possession of a deadly weapon and conspiracy to commit acts of terrorism quicker than we could say ‘24 hour Psycho’.

Turner Prize winning artist and YBA alumni, pride of Cool Britania, Douglas Gordon, however, gets labelled ‘wholly inappropriate’ and billed for the repairs. He only put a dent in a wall and did a bit of graffiti, but still, the rest of us wouldn’t get away with it so lightly. Let’s be clear: the man wielded an axe in a theatre, which in itself is a sign of mental instability. To gain some perspective here, consider that poor Adam Ant was sectioned under the metal health act for turning up at a North London pub with a car alternator and then throwing it through a window. He got away with a charge of affray, but was sectioned nonetheless, so one would think that a man who skulks around a theatre with an axe – with intent to cause criminal damage – deserves at least a once over by a psychiatrist.

The reality of it is that it was all a grand publicity stunt by Gordon to promote his ailing play, which is precisely why he used an axe to make such a small, fixable, innocuous dent in the wall and signed it. That gesture lodges the whole incident in public consciousness, which in turn gives the press something to write about and boosts ticket sales for the theatre. Since he was doing Empire such a good service, there was no need to call the police or treat him like the other proles who run around with axes. Back in the days when he slowed Psycho down to a gruelling 24-hour sequence, he was doing his best work, but that’s all over now; all that remains is the bad education of shock and awe, which, even for a washed up YBA, still works a treat.

‘Neck of the Woods’ runs until 18th July.

Next week: Daniel reveals the outrageous story of Tracey Emin running riot with a sharpened pencil on the streets of East London . 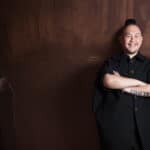 LOW Kee Hong has been appointed as Creative Director for Manchester International Festival (MIF), as the organisation prepares for The […]