This will be Thomas Hirschhorn’s first major solo show in London in many years.

For the show Thomas Hirschhorn has created a new work entitled In-Between, based on and highlighting the quote;

“Destruction is difficult. It is as difficult as creation.”

by Italian Marxist theorist and politician, Antonio Gramsci, a new artwork made for the SLG’s main space continues the artist’s exploration in recent works, of the aesthetic of ruins.

“The aesthetic of In-Between borrows from pictures of destruction- destruction by violence, by war, by accident, by nature, by structural failures, by corruption, by fatality. I want to establish a body of work which encompasses Antonio Gramsci’s quote. Without being anecdotic or literal, I can testify that to set-up a work in an exhibition space which gives form to destruction is indeed as difficult as anything else. With In-Between I want to create a new form, I want to propose an experience, an art-experience in the range of ‘successes’, failures and in-betweens.” 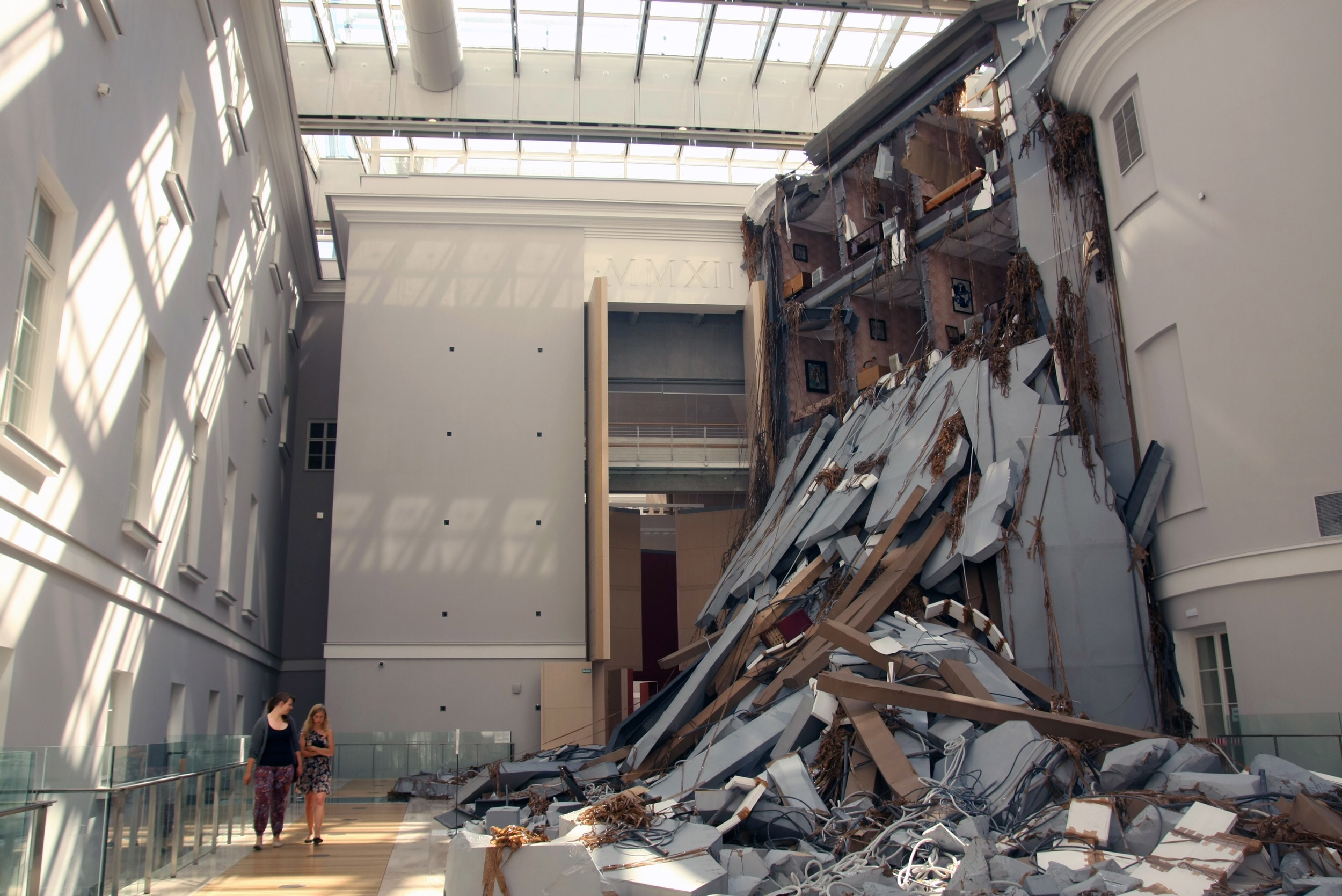 Having emerged as an artist in the 1990s, Thomas Hirschhorn is internationally regarded as being one of the most important artists of his generation. Using low-grade materials – cardboard, plastic sheeting, packing tape, aluminium foil – variously combined with newspaper and magazine cuttings, mannequins, furniture and a wide range of other miscellany, together with references to radical theorists such as Gilles Deleuze and George Bataille, he has established an expansive but distinctive visual language with which he creates extraordinary, provocative artworks imbued with political content. Over the past twenty years Hirschhorn has exhibited in museums and galleries worldwide, and equally importantly in more openly public locations, from city streets to housing estates. For example, his Gramsci Monument, a major public artwork installed during summer 2013 with the help of residents at Forest Houses, a New York City Housing Authority development in the Bronx, New York, culminated in the publication of a substantial book documenting the project produced by Dia Art Foundation. 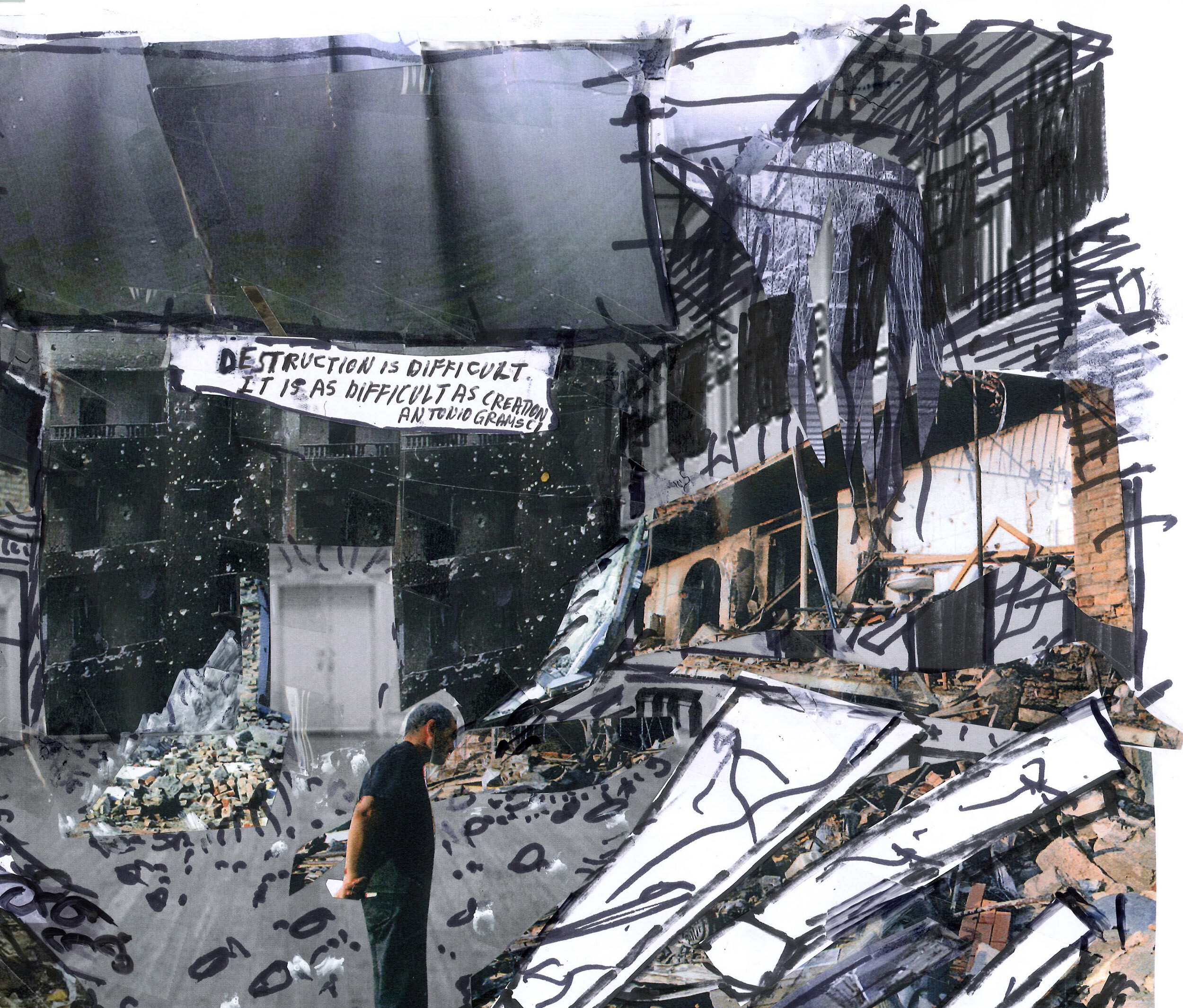 At the South London Gallery, In-Between contributes to a body of work made over the past three years informed by a process of researching, collecting and analysing the formal composition of ruinous and bomb-damaged locations all over the world. As an expression of the aesthetic of destruction, ruin and disaster, it further develops ideas explored in the artworks Concordia, Concordia, 2012, shown in New York, Break-Through, 2013, presented in Naples, Abschlag, 2014, in Saint-Petersburg, and Höhere Gewalt, 2014, exhibited in Berlin. Reflecting on the Gramsci quote at the centrepiece of In-Between, Hirschhorn said; “I see this as the in-between-status of a journey or trajectory. To me, the quote is not about separating or opposing ‘creation’ and ‘destruction’, but about the difficulty of positioning oneself in the midst of the moving world. The challenge of confronting the world’s reality stands between ‘creation’ and ‘destruction’. ‘In Between’ is the affirmation of precarious dimension, the dimension of the non-guaranteed.”
The exhibition is supported by the Swiss Arts Council Pro Helvetia and Stephen Friedman Gallery 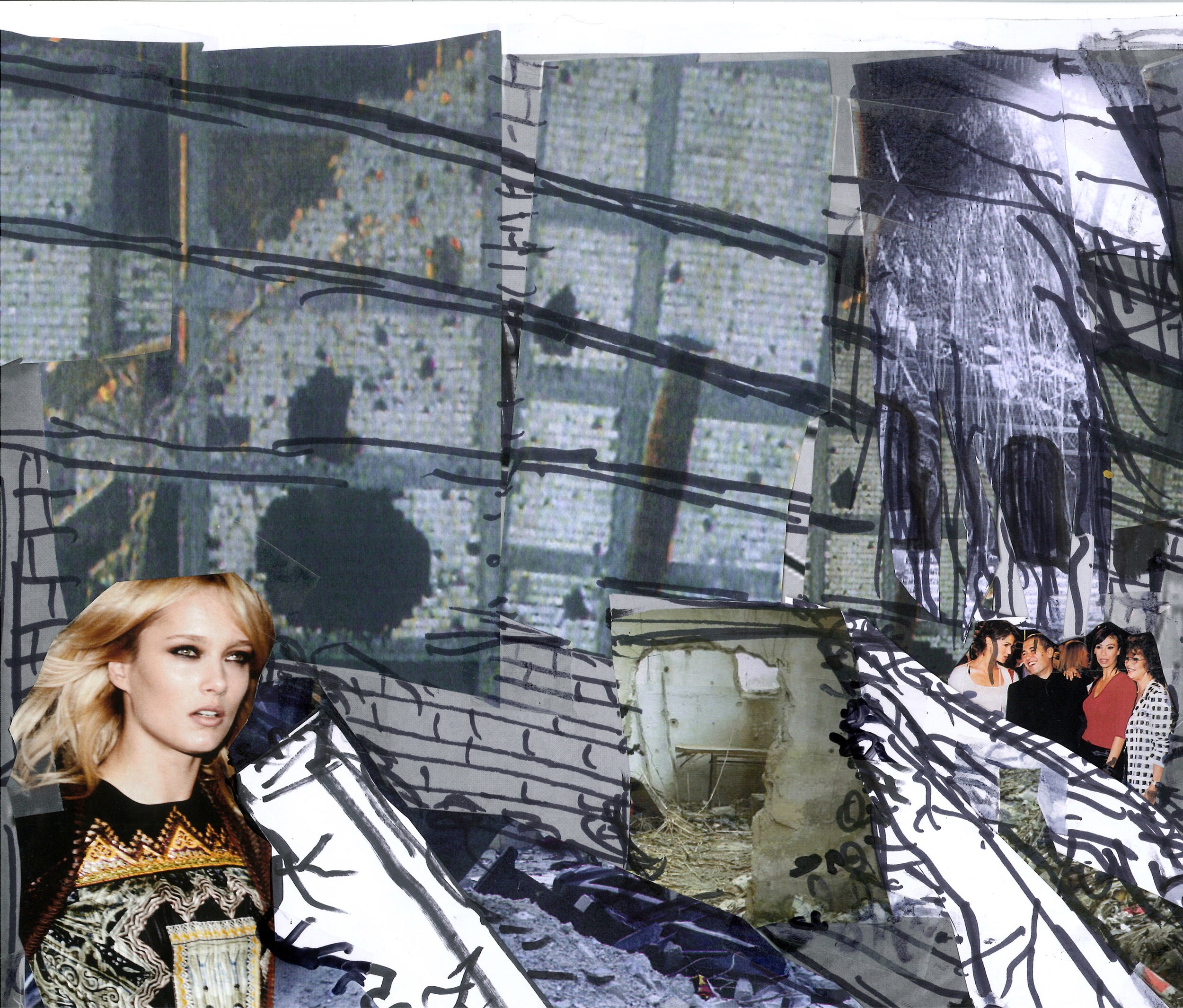