With Peckham’s proximity to some of the countries leading art schools there has always been, and hopefully always will be, an active and interesting art scene. It’s distance from the galleries of the West and East End meant that, until very recently, it has been unsullied by the irksomely fashionable, money driven babylon that is the London art world. A post YBA scene which, for many years, largely revolved around the South London Gallery and art schools comprised of insider/outsider artists who were more in tune with London party culture than the contemporary art world. It’s ability to detach itself created a hot bed of experimentation which has grown into a sophisticated network of galleries, curators and artists.

The steady evolution of Peckham’s arty microculture and it’s inevitable gentrification has pushed it in to refreshing yet mature territory. Galleries like The Sunday Painter and Arcadia Missa have gone from fledgling gallery/studios in to internationally recognized commercial spaces refining and paving the way for a new generation of gallery. 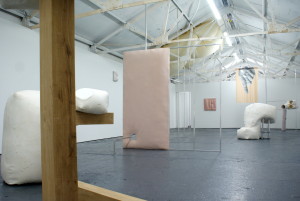 Part of the new generation of Peckham’s bright young things is BOSSE & BAUM.

B&B are Lana Bountakidou and Alexandra Warder a curatorial duo formed in 2013 who have come to rest, with their permanent commercial gallery space, in Peckham’s Copeland Road industrial estate.

The pair have amassed, in what must be quite a short time, a whole bunch of gallery experience as well as having an intimidatingly academic background. 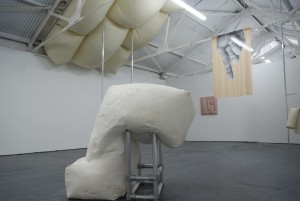 The gallery focuses predominantly on Sculpture, installation, painting and performance and specialises in showcasing emerging international artists, based in London, offering their first solo exhibitions as well as a studio space for the duration of the show. B&B have really set out to nurture and develop artists and although they function as a commercial space they do not expect exclusivity in return. There just seems to be a mutual understanding and appreciation between gallerist and artist. 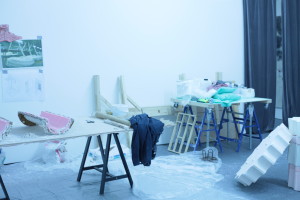 B&B present an extremely varied programme which preserves an earnest and ardent perspective on contemporary art, something that is lacking in a lot of London galleries. They have intentionally set out to create a space that puts creativity first without fear of embracing the new.

The sad fact is that everyone, especially in London, has to generate money in order to survive and finding an outfit like B&B who are young, massively professional and maintain a love and passion for contemporary art which isn’t solely motivated by cash  makes one realise the importance of the endeavors of galleries like this.

Their current show ‘More And More’ is a sculpture exhibition by Holly Hendry dealing with space and architecture and opened with a group of performances ranging from readings to contemporary dance. There is also the launch of a publication to accompany the show happening tonight and the next show will be by Luke Burton, titled Filigree Endings opening on the 27th of Feb and will continue until 27t March 2015. Check out their site HERE.