SHIRT and The Art Of Rap - FAD Magazine
Skip to content 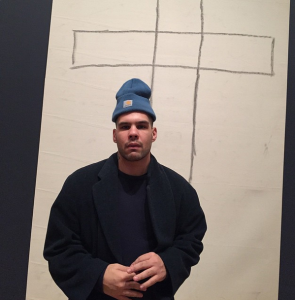 Nowadays when the art world takes an interest in Hip Hop the results, with exception, are usually corny as fuck. It’s been a long time since the likes of Rammellzee and Basquiat proved that there was something within Hip Hop culture that could hold the interest of the Art world for more than 15 minutes.

Today the best we get is Kanye West playing at art collector or boring collaborations between fashionable rappers in skirts and over rated young artists.

SHIRT, on the other hand, is something completely different………..

SHIRT aka Duchamp Shirt is a conceptual artist and self proclaimed ‘art rapper’ from Queens New York and yes Normally this kind of thing would turn my stomach too but the fact of the matter is SHIRT is actually really good! I mean anyone who lists John Baldessari and Biggie Smalls as some of their biggest influences has to be doing something right. Right?

Since 2010 SHIRT has been producing gritty ‘BOOM BAP’ Hip Hop with a stench of the avant-garde and releasing it, along with some pretty out there visuals, in all sorts of fun and interesting ways via the internet.

He’s launched various bizarre websites, including shirtfuckedrhianna.com, to play host to his audiovisual offerings as well as creating a faux NY Times page to profile himself and his single ‘Van Gogh’. Shirt also runs a blog ‘Worksite’ where he showcases his painting and other visual art.

All of his antics can be checked out HERE along with his new LP ‘Mueseum’which he is selling for only 5 clams. Listen to the first single off of ‘Museum’ below.