Daniel's Value and Ideas #52: The Lights That Never Go Out - FAD Magazine
Skip to content 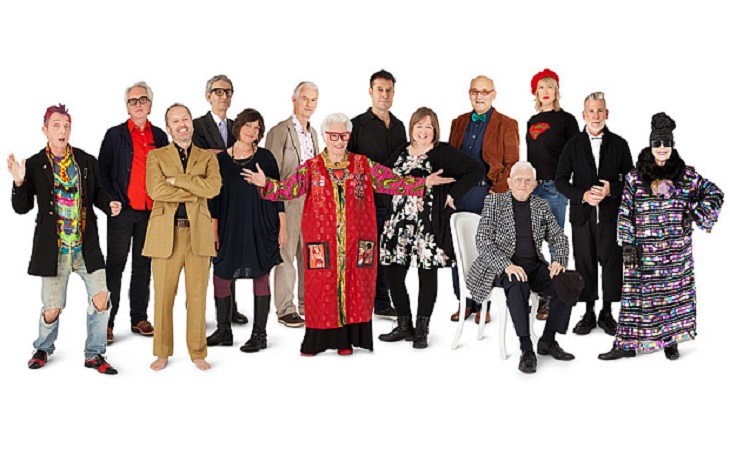 All 14 of the Bright Old Things

As is customary in January, Selfridges’ windows on Oxford Street are celebrating innovations in art and design. The annual event, Bright Young Things, offers creatives the opportunity to showcase their talent with the full backing of a forward-thinking department store. But this year there is a twist, which throws into sharp relief our culture’s obsession with youth.

This year Selfridges presents Bright Old Things – a selection of fourteen men and women who refuse to let old age slow them down and using retirement as an opportunity to try something new. Each Bright Old Thing is given a window to show their wares and has to produce a product that can be sold in the concept store. They range from the actor who paints chips and the actress who designs furniture to the food writer who makes art and the product designer who broadcasts to the universe.

William Forbes Hamilton made his name playing the villain in horror films. He once looked at a reproduction of The Last Supper and wondered what a modern day Jesus would have for his last meal, concluding that it would be fish and chips with HP brown sauce. And so he set about a new vocation in painting, depicting this solitary, simple last meal of a modern day Christ. This painting now forms the centrepiece of his Selfridges window, which is packed full of fresh canvases awaiting new paintings upon them and a table set out with Christ’s fish and chips as if the saviour is expected for dinner at any moment. He first discovered painting at the age of 82 when a friend suggested he come along to a painting class and when told to just paint something, The Last Supper seemed the logical place to start. His paintings begin with newspaper articles, which gives him an outlet for his voracious consumption of the media, and in his window you can feel intensity of creative possibility that he sees simmering every day in the papers. 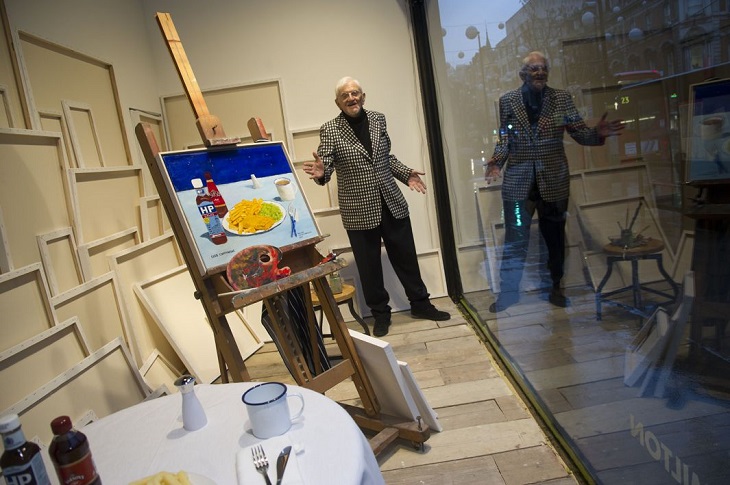 William Forbes Hamilton in his window, with his rendition of The Last Supper

At the age of 57, having inherited some money from her father, Den Woods decided to make a chair. She describes herself as a ‘mostly resting actor’, so she has ample freedom to explore the world of 16th Century Spanish and Portuguese furniture design. Den came up with a chair that is firmly rooted in the arts and crafts tradition, where truth to materials and process determine the aesthetic features of the finished product. Now she has a carefully selected team of artisans who help her realise her vision of a chair made through purely traditional techniques, using only leather in its natural colour that darkens with age. Den’s contribution to the concept store, then, is her made-to-order chairs, which sell for £2800; you get the feeling that this chair will last more than a lifetime and be the most comfortable thing you’ve ever sat in, if only because you know it has been made slowly, deliberately, with passion and insight.

Sue Kreitzman had a seemingly religious experience one day when she was going about her normal business as a food writer. As she was editing her 27th cookbook, Sue idly drew a mermaid on the margin of the page and suddenly felt there was a calling in this unconscious act. From that moment on she devoted herself to art, making unsettling, folk sculptures of ostentatiously decorated dolls. Sue’s Selfridges window is bursting with her creations, expressing the energy and commitment with which she pursues her new vocation. All the energy she once put in to food and cooking has been transferred into art, making her feel like a completely different person.

Tony Gibson used to be a product designer, and when he moved his family to the beautiful depths of rural Wales he also taught product design at the University of Wales.  He now runs a specialist gift retail business with his wife in Somerset. Tony’s later life vocation sounds outrageously eccentric, but it is completely logical for a man who spent his career unravelling the internal workings of ordinary things and then explaining them to other people. Tony has taken it upon himself to broadcast the universe: his video blog, Earth News for Space, explains to all the other inhabitants of the universe the essential components of life on Earth. So far, he has produced instructive bulletins for the aliens on topics as diverse as hills, teeth and plyers. It has the low-fi charm of the early days of the internet mixed with 1970s BBC sci-fi, with its cardboard props, roughly hewn scenery and somewhat cavalier production values. Sometimes it is difficult to tell whether this is naivety or aesthetic prowess, such is the completely deadpan of Tony’s delivery, but his indomitable intelligence suggests otherwise. The refreshing thing about Tony’s mad mission is that it doesn’t come with all the hocus-pocus of conspiracy theories about life in outer space – it really is just what it is, a public service broadcast for the rest of the universe, and therein lies the intelligence of the joke.

Tony Gibson on the set of Earth News for Space

The interesting thing about all of the Bright Old Things is that they treat their new vocation as a baptism into a life which almost completely deletes the old one, as if they finally found what they’d unknowingly been looking for. It also teaches us a lesson about our obsession with youth, which misguidedly makes superstars of minimally talented idiots like Justin Bieber. With age comes the same focus, ambition and passion, but unlike in youth it is harnessed in a measured, self-conscious way which thinks through the consequences and filters out the nonsense. Paradoxically, then, the old have learned to move slower, whereas the young burnout under pressure. The result is a series of window installations and products that have the weight of history behind them and yet all the freshness of an idea only just conceived. Bright Old Things teaches us that, as Father Neil Hannon said in one of his sermons, ‘Youth is wasted on the young’. 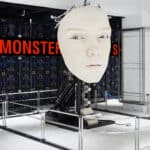 Next Week, Selfridges will partner with Berlin’s Reference Festival to present SUPERFUTURES, an immersive exhibition which will bring together 13 experiential spectacles and surreal interventions by leading artists, brands and thinkers. 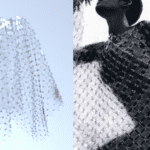