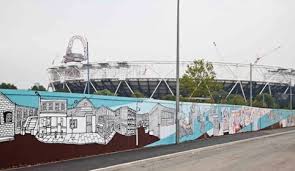 Jo Peel ‘Meet Me In The City’

Jo Peel ‘Meet Me In The City’
An animation was made over 30m of hoardings at The Queen Elizabeth Olympic Park.
Images were carefully painted, documented using a camera, erased and repainted to further the animated sequence.
This painstaking procedure took the artist approximately 2 months to produce the 3 minute stop motion animated video.
Traces of the process remain in the form ‘ghosting’ on the mural which continues over 210 meters …
Animation & DIrection: Jo Peel Executive Producers: Moniker Projects
Camera Operators: Zoe Genders, Helen Perrault-Newby
Art Assistant: Tamara Venn, Imogen Bennet