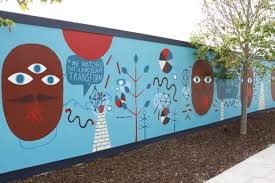 ‘Tapestry’ by David Shillinglaw, launched at the beginning of July 2014 at Chobham Manor, the first new neighbourhood at Queen Elizabeth Olympic Park. The 385 metre mural inspired by the Bayeux tapestry represents the story of the Olympics, as told through the eyes of the local community. This intergenerational project weaves together the community’s journey from the announcement that London won the bid to the end of the 2012 Olympics and beyond. David Shillinglaw has brought to life these stories and connects the Park to the local community and the outside world.