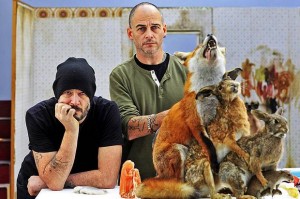 Jake and Dinos Chapman are nearing the end of a crowdfunding campaign for an exhibition in their hometown of Hastings. It’s a bizarre concoction of the unsentimental artists making a sentimental homecoming, the anti-establishment desperately trying to get into the establishment via a friendly-faced approach to decidedly unfriendly art. This stunt reveals a savagery behind the Chapman Brothers’ practice, which is otherwise some of the greatest art of their generation.

The campaign, spearheaded by the Art Fund for museums, aims to raise £25,000 for a show at the Jerwood Gallery. Jake and Dinos plan to show new work, as well as a live action ‘doctoring studio’ in which the Brothers will modify and improve artworks they have found in local junk shops or that have been brought in by members of the public. The most excruciating part is the proposed tattoo parlour: neither Jake nor Dinos have much prowess with the needle, as evidenced by Jake’s arms – one scribble inflicted by himself, the other with equal incompetence by Dinos. In a sense, it’s perfect form – poorly executed art in painfully administered tattoos – from the brothers who make bad art for bad people.

The rewards for contributing to the crowdfunding effort include personalised postcards for £15, Chapman designed transfer tattoos for £25, Chapman loo-roll for £60 and a studio visit with the Brothers in their Hackney Wick dream factory for £950. This is the cost of bringing the brothers back to the site of their adolescent follies, just like that dog who returns to its vomit. One wonders, however, what happens if the appetite for Chapman tat has been satisfied and they don’t make the target. This real possibility raises a pertinent – and merrily glossed-over – question: surely the Chapmans, some private sponsor or their gallery, White Cube, could afford to stump up the cash even if the Jerwood cannot, so what is the meaning of their embarking upon a crowdfunding campaign?

Crowdfunding is more than just a way of raising money by means of offering delectable rewards. It is the wholesale use of social media to engage people – complete strangers – and is therefore the creation of a community who are bound by a common interest and a common goal. When the goal is achieved, there is a residual sense of gratification and satisfaction that filters through the entire community, and in this way it is a great vote of confidence. Such is the sense of community generated by crowfunding that Amanda Palmer caused outrage when she raised $1.2million on Kickstarter in order to pay off her personal debts.

This sounds like the diametric opposite of the Chapman Brothers: they make work to amuse each other, regardless of how offended or unimpressed anyone else might be; they reject an art establishment which talks about taste and aesthetics and regard public opinion as a necessary irrelevance; and their crass aesthetic, mutilation of masterpieces and flirtations with sharks and Nazis aim to horrify the casual art-viewer. It looks as if even though the Chapmans don’t hate you, they want to remind you that one day you will no longer be loved; that all the beauty fades, until only the pure existential terror remains.

This reveals a complexity in the Chapmans’ art. Its very anti-art rhetoric suggests a desire to reach out to a general public which is not entrenched in the critical jargon, intellectual pretence and market hubris of the contemporary artworld. The Chapmans’ art looks like your child might have made it; it is a series of rough, sloppy slapstick jokes that humanise and nullify the idea of high art. There is something deliciously churlish in the disarmingly ordinary components of the Hell dioramas, and there is something glibly childish in the defacing of anonymous 19th century portraits. It looks as if they are trying to make art that speaks to the most base sensibilities of ordinary people, so the crowdfunidng community seems like a logical platform to promote their work.

But Jake and Dinos underpin their practice with a marketing offensive that makes shock and awe look like an after dinner speech by Hugh Grant. Their standard procedure is to preface the unveiling of some new penis-nosed child or black Nazi bum orgy with a series of inflammatory remarks that beguile middle England into an apoplectic fervour. I once attended a talk at the Whitechapel Gallery where they were discussing their latest series of Bedtime Stories drawings when someone asked how the innocence of childhood informs such work, to which Jake answered, ‘children are idiots. I know, I’ve got three of them’. Jake, only this week, denounced taking children to museums as a total waste of time, as if to theoretically cleanse his audience for the Jerwood show in advance. He did, however, say he drew a line at a tattoo of Hitler’s dog, but surely only to dare some nutter to actually request it. In order to be this brash and outright offensive, one must reserve a monumental contempt for the faceless totality of humanity, which only suggests that in asking people for their money to fund your exhibition you are using them, against Kantian imperatives, as means rather than as ends in themselves.

On one level, the Chapmans’ habit of taking PR to mean being unspeakably vile is precisely the kind of sensationalist behaviour that drove the YBA movement to stardom. But on another level, it portrays the artists as pretty grotesque characters who use their audience of living, breathing human beings as objects to be toyed with like captive animals, rather than as equal partners to be engaged and respected. Using an unwitting public as canvases for tattoos or as donors of beloved artworks or as barometers of a fading moral compass is a crucial part of the whole shtick. But when you are asking people to pay for something that you could afford to pay for yourself, it runs the risk of alienating people if they do not see the bigger picture. The important thing is to see this vulgar, brutal marketing strategy as an intricate part of the meaning of the art that aims to expose the dark underbelly of both humanity and art itself.

Although it looks like a publicity stunt designed only for Jake and Dinos’ gain, another strand of their quest to amuse themselves unto death in a world they apparently find so stultifying, it is also an expression of their art as total rebellion. Jake and Dinos are using crowdfunding as a means of co-opting the public into a relationship with contemporary art; it has the outer appearance of a free choice, but an investment is always is a decorated shackle somewhere along the line. If you donate to these guys – and you probably should because their shows surpass anything any of the YBAs are now capable of –don’t let them hold you to ransom or do any sexual favours for them. You can almost hear Jake and Dinos, channelling the spirit of Amanda Palmer as they pierce your arm with an inky needle, intoning ‘and you persist even after I bet you a billion dollars that I’ll never love you’.