REVIEW: The unveiling of Slipstream by Richard Wilson at Heathrow's Terminal 2 by Harriet Thorpe - FAD Magazine
Skip to content 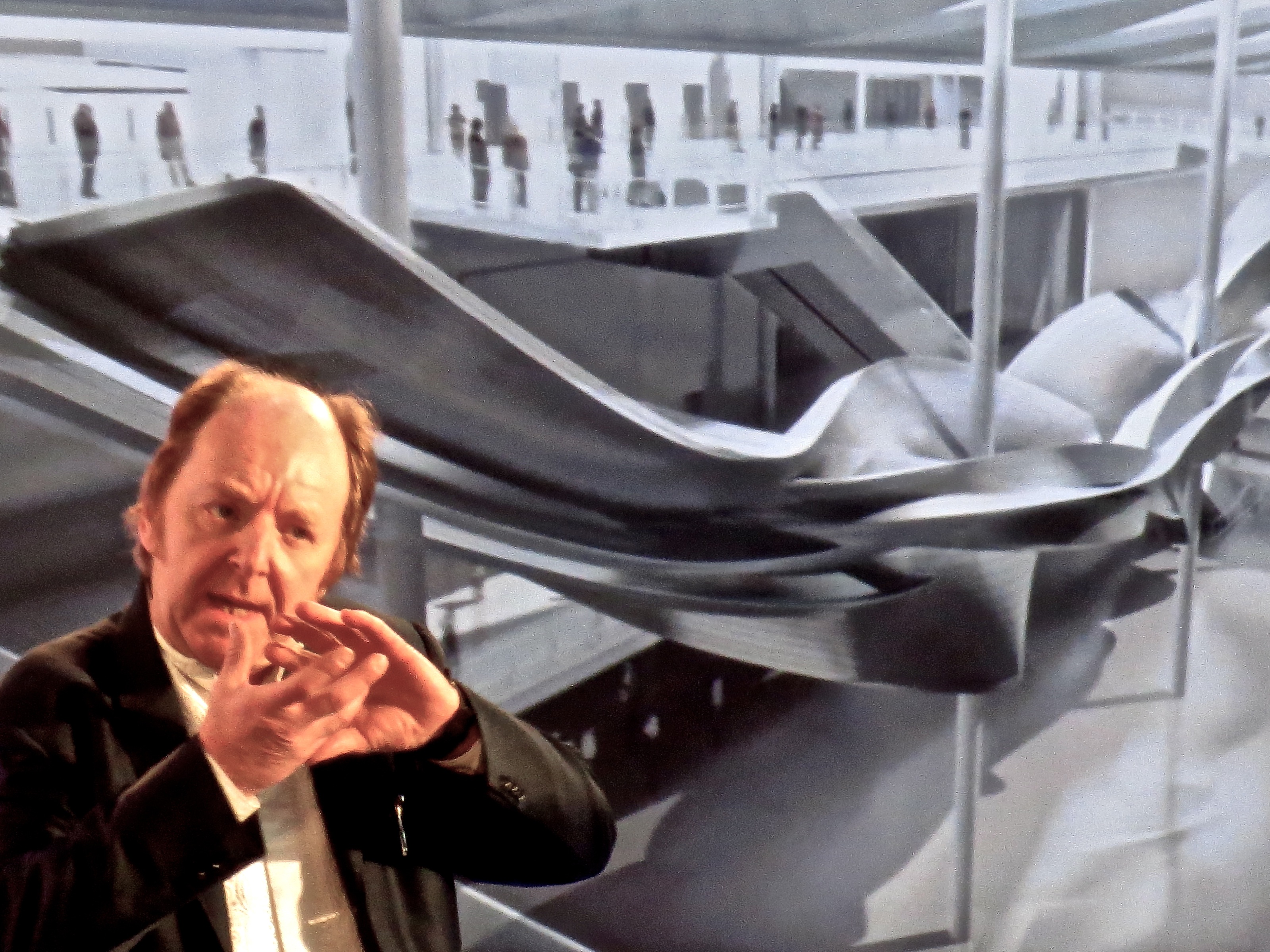 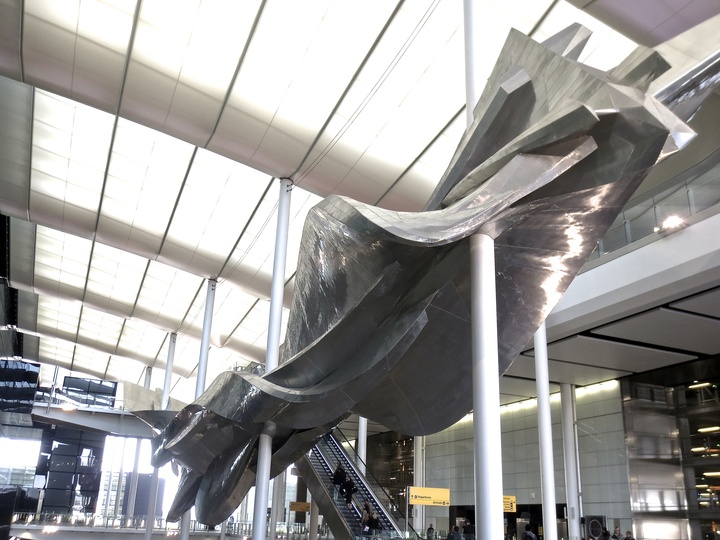 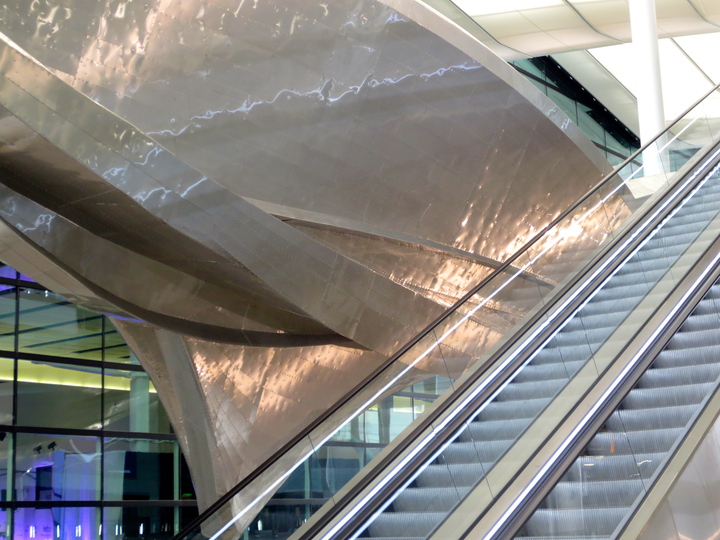 Slipstream is a new public artwork by Richard Wilson at Heathrow’s Terminal 2 which is set to open June 2014. Commissioned by Heathrow and curated by public arts agency Futurecity, the monumental sculpture exists in a void of airspace in the Terminal 2 entrance hall. Designed specifically for the site, it is 78m in length, suspended 18m above ground level and supported by four pillars which also hold up the roof. Wilson’s Slipstream is inspired by aerodynamic flight and the form is an abstract response to the undulating architecture of the terminal building designed by architect Luis Vidal.

Wilson was selected for the commission from a group of five international artists. Although nationality was not taken into consideration during the selection process, the presence of a monumental sculpture by a British artist to welcome visitors to the UK is a powerful element of the piece. Heathrow is the busiest airport in the UK, central to trade and economy, yet alongside this it is important to recognise the outstanding artistic talent of the country which contributes substantially to the global status of the UK. Wilson told me, “Being a British artist, I am extremely proud to have a work at Heathrow, an airport which has so much history, but that was always an added bonus, not a reason for doing the commission.”

With two Turner prize nominations, Wilson has worked on previous well-known site specific works such as an installation at the Saatchi Gallery which occupies the whole of the lower gallery, 20:50 (1987) and the Rooftop commission for the De La Warr Pavillion titled, Hang on a minute lads, I’ve got a great idea (2012). Although Wilson is known for his large scale architectural interventions, Slipstream is by far his largest work to date. Wilson described Slipstream as his “blue whale moment” from when he visited the Natural History Museum as a child.

As a viewer of Slipstream, the immensity of form can only be understood once you have walked from one side of the hall to the other and travelled on the escalator which ascends in parallel. Wilson described travelling on the escalator as like the experience of being in your own personal aeroplane, viewing the sculpture and travelling with it. “There is no tactile experience of the sculpture because it is suspended in the void, the closest that you can get to the piece is at 1.8m distance on the escalator. The viewer can experience this sense of flying.”

Wilson described how the idea for the sculpture evolved, “I had been working on a previous project to record movements, which involved a tumbling car, so Slipstream was my journey into the sculpture; I wanted to make an event of this occurrence.” He was inspired by the imaginary flight path of a Zivko Edge 540 stunt plane, an advanced aerobatics aircraft designed and built in Guthrie, Oklahoma and flown by British pilot Paul Bonhomme, Red Bull Air Race world champion.

“I was thinking about air currents, turbulence, smoke trails and the void. The sculpture is about journey, speed, endeavour. It’s really a metaphor for the passenger and a statement to show movement as a solid moment, like moving through clay to carve a block in a fictitious scenario. There was a sense of creating movement, pushing the air and then translating that into the virtual world of the computer to see a shape. From there, it was about engineering something bespoke. This is where the computer generation came in and also the technicians from Hull.”

The extent of technical thinking which went into the structure also had to occur on a huge scale. Wilson worked with structural engineers Price & Myers and Hull-based fabricators Commercial Systems International. Their involvement was necessary from the start of the project and Wilson took a whole team of professionals to a meeting with the Heathrow design team to explain how Slipstream could come to life. I asked him how far was it a team and an individual process. “Well, that’s why I took the whole team into the interview, because it was only do-able in a group, we needed all of that expertise. My team, they are the doers and the makers, but at the same time none of it would have happened without me, I am the creator, the ring master and the instigator if you like. Obviously compromise was made because of the large scale and money effected the aesthetic result.”

Slipstream is smooth and sleek to the eye, yet the skin of the sculpture is punctuated by rivets and lined by thin seams where the 23 panels are plated together. Wilson explained, “It’s made of clad aluminium inspired by the aerodynamic aircrafts of the 60s and 70s. The surface is semi-buffed and the skin is loop riveted, fused then polished and finished. The effect pulls in light and reflects and undulates the surface. The powder coating protects the sculpture, because the space opens out to the elements at both ends and we needed to ensure longevity. The outer skin hides the structure within, which is made up of armature and truss work, bulk heads, plywood, all supporting the outer scheme. It’s a bespoke making requiring sophistication and intelligence.”

The sculpture is monumentally visible on two levels, firstly it occupies a space which 20 million passengers will be passing through over a year and secondly because it’s physical and conceptual presence is inescapable. This collaborative commission by Richard Wilson has created a space in Terminal 2 where culture is compulsory.