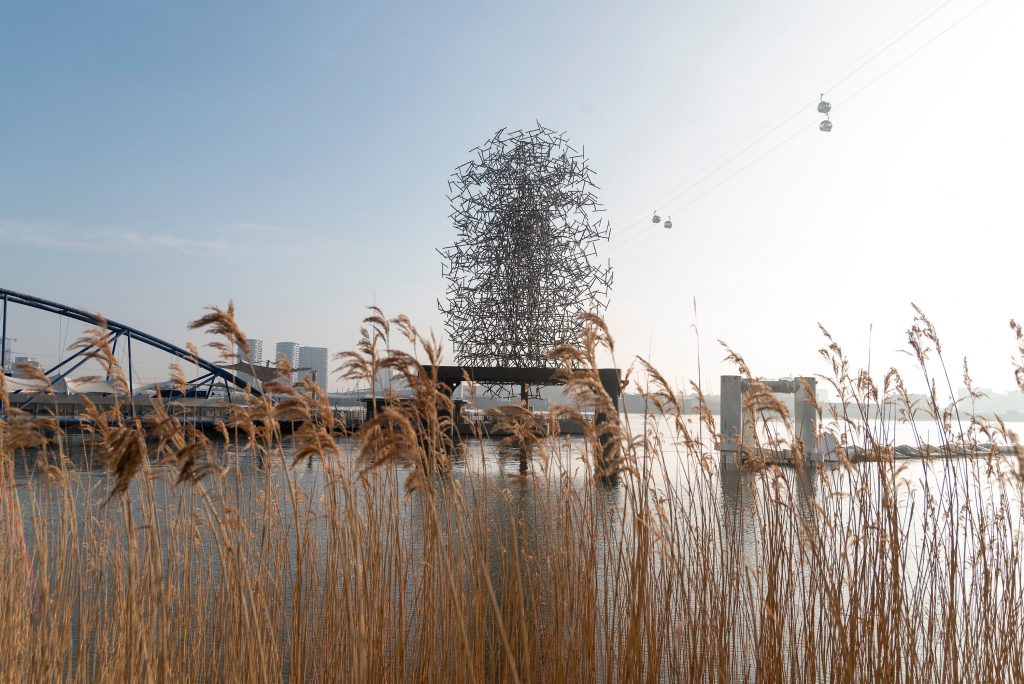 Established in 2015, The Line is London’s first dedicated public art walk. Following the line of the Greenwich Meridian between Queen Elizabeth Olympic Park and The O2, The Line features an evolving programme of art installations, projects and events by internationally acclaimed artists including Antony Gormley, Richard Wilson, Abigail Fallis, Laura Ford and Anish Kapoor. The Line illuminates an inspiring landscape where everyone can explore art, nature and heritage for free.

To coincide with International Sculpture Day and in celebration of The Line’s 5th anniversary, they have launched The Line Online: a new interactive website offering a virtual experience of The Line which can be enjoyed at home. Developed by the London-based design practice, Burgess & Beech, The Line Online incorporates a range of new features to bring to life the experience of walking The Line, including an enriched programme to support learning created in collaboration with the House of Fairy Tales and a new interactive map. 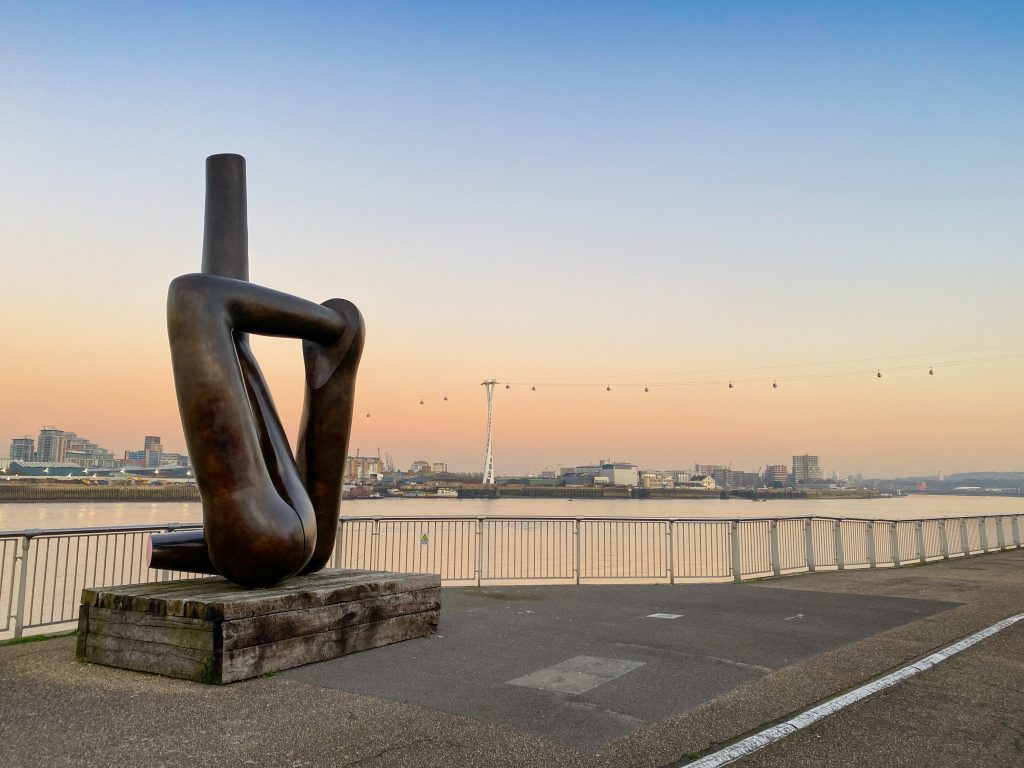 The Line has always offered a unique cultural experience and the new interactive map is an opportunity to discover the extraordinary heritage and wildlife to be found along the route. Developed with support from leading institutions, including National Portrait Gallery, British Museum, Getty Images, Newham Archives and Museum of London, who have generously provided images, the map uncovers the hidden past of some of the key historic people and places along the walk. It also as explores the rich natural life of the waterways, home to more than 50 species of birds and a huge variety of both native and non-indigenous flora.

Megan Piper, Co-Founder and Director of The Line said;

‘It’s been fantastic to have the support of so many cultural organisations and this new strand of our programme reflects The Line’s commitment to collaboration. Our new website will transform people’s understanding and experience of The Line – it will highlight the strength of our artistic programme, as well as the wealth of wildlife along the route and the fascinating history of this part of London.’

The Line Online also features exclusive new content, including interviews filmed by artists at home during the COVID-19 pandemic, including Antony Gormley, Thomson & Craighead, Laura Ford, Abigail Fallis, Joanna Rajkowska and Alex Chinneck. Following the postponement of Simon Faithfull’s exhibition at the House Mill, the complete version of his film 0º00 Navigation Part I: A Journey Across England is being shared online for the first time. The website will also include news and announcements about exciting upcoming collaborations and projects with artists including Larry Achiampong, Rana Begum, Eva Rothschild, Madge Gill, Yinka Ilori, Thomas J Price and Anne Hardy; providing something to look forward to during this difficult time.

The Line was established by Megan Piper and the late regeneration expert Clive Dutton OBE, whose life’s work was rooted in a commitment to improving the quality of life for people in urban environments and to putting art and culture at the heart of regeneration. Running for 3 miles through the boroughs of Newham, Tower Hamlets and Greenwich – currently one of the largest areas of regeneration in Europe – local support and engagement have been fundamental to the continued success of the art walk.

In a London borough that is recognised nationally as having some of the lowest participation levels in arts and heritage in the country, the sheer cultural significance of The Line should not be underestimated. Quite literally thousands of local people who may never have entered a gallery, or had the opportunity to experience serious art, are now rubbing shoulders with art on a daily basis’

The Line currently features monumental sculptures by ten artists, including Antony Gormley’s Quantum Cloud and Gary Hume’s Liberty Grip at Greenwich Peninsula and Joanna Rajkowska’s The Hatchling and Abigail Fallis’ DNA DL90 on the River Lea. New additions for 2020 include the recent installation of Laura Ford’s Bird Boy at the Royal Victoria Dock and the extension of the route through Queen Elizabeth Olympic Park, to encompass the UK’s largest sculpture, Anish Kapoor’s ArcelorMittal Orbit, and Carsten Höller’s The Slide. 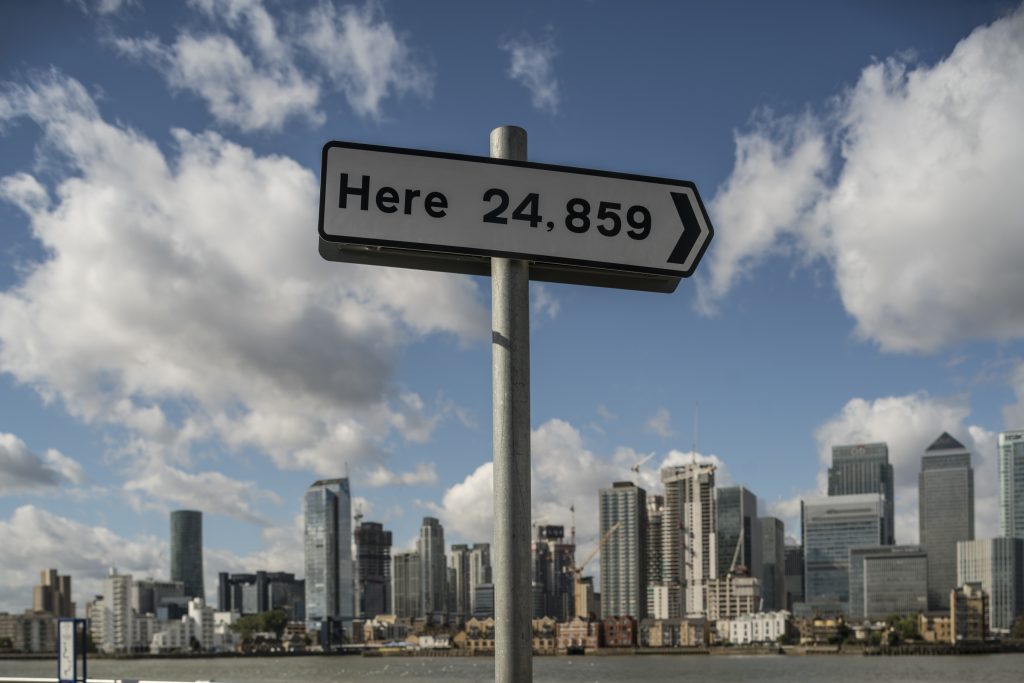 Historically, most of the sculptures on view have been loans from artists, galleries and private collectors but to mark The Line’s 5th anniversary, the programme will now also include new and commissioned works, creating a remarkable free outdoor art gallery which can be enjoyed by Londoners and visitors to the capital alike.

The Line was co-founded by Megan Piper and the late regeneration expert Clive Dutton OBE (1953-2015) whose life’s work was rooted in a commitment to improving the quality of life for people in urban environments and putting art and culture at the heart of regeneration. Local support and engagement with grassroots organisations were key to the development of The Line and continue to be fundamental to its success.

The Line was initiated through a Spacehive crowdfunding campaign, which raised over £140,000 in less than eight weeks in 2014. In the subsequent five years, through the generous support of sponsors and patrons, it ran without public funding. Since its inception, The Line has received phenomenal in-kind support from its Founding Supporters, which include Rogers Stirk Harbour + Partners and Farrer & Co. Founding Patrons include Garfield Weston Foundation, Oak Foundation, Bloomberg and Liberty Specialty Markets.

The Line went from being the seed of an idea to opening to the public in just 18 months and in May 2015, The Line unveiled monumental sculptures along the footpaths of East London’s waterways. The inaugural loans, which included Damien Hirst, Eduardo Paolozzi and Thomas J Price, came through an open submission and were selected by a panel that included Turner Prize-winning artist Mark Wallinger, curator Omar Kholeif, art critic Richard Cork, collector and philanthropist Anita Zabludowicz and Simon Myers, local resident and founder of Cody Dock. The Line currently includes works by ten artists. The majority of these are loans from artists, galleries and private collections but The Line also highlights a number of pre-existing works along the route, including Antony Gormley’s Quantum Cloud and Richard Wilson’s A Slice of Reality.

In 2020, The Line celebrates its fifth anniversary with the extension of its route into Queen Elizabeth Olympic Park, the launch of a new website and, for the first time, site-specific projects, commissions and cultural collaborations.

The Line has recently been listed in Condé Nast Traveller’s Best Walks in London.

Burgess & Beech are a British multidisciplinary design practice working within the fields of identity, art direction and web design for the cultural sector, Dougal Burgess and Barney Beech have been working together since 2006. Their work has become globally renowned, featured in numerous magazines and books, and invited to hold workshops and give talks at a range of institutions and Universities. The practice has worked with a range of artists, designers and cultural institutions, including the V&A, Royal Academy, Artangel, Blain Southern, Jamie Fobert Architects, National Portrait Gallery, Zabludowicz Collection, Nottingham Contemporary, Momart and Greenpeace.