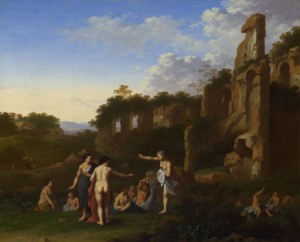 Room 17 features artists who admired the Italian method of painting; Mediterranean lighting, soft focus and renaissance tendencies, and travelled from the Netherlands to the region in order to learn their way of painting, and to mimic it. But viewed with contemporary theory in mind, this image portrays far more than the mimicry and idealisation of the Italians.

“Women bathing in a Landscape” depicts nude women relaxing and talking amongst nature and the nearby ruins of an ancient Roman building, which has succumb to natural forces and decay.  No men feature in the painting. The women’s seemingly random positioning in this sublime landscape is suggestive of the Renaissance belief that women are closer to, and part of nature. Nature is all that is shown here. Despite the reasonably empty compositional space there is no room for any other substance here, no place for it; no intellect, no business, no power or authority, there is no real purpose to this image or the women within it. These women have no place in society, appearing as substandard citizens, lying on the floor like animals, like grazing cattle; plump, unidealised and ugly, with undistinguished facial features. There is far more focus, and painterly detail, in their naked bodies; these women are objectified.

Their nudity however is not directly sexualised or idealised, making them appear more naked than nude, seconded as they do have some garments and drapery to cover up. The masculinisation of the female figure, muscular arms and legs, is typical of Italian Mannerism, but also recalls Freud’s fetishisation theories. A further example of Freud’s theories, the castration complex, the distraction of attention from the threatening female other by inclusion of forceful masculinity and phallic shapes alongside the depiction of women, can also be read into this image. In the ancient ruin small phalluses are seen in the arches. Similarly the tallest feature in the painting is the vertical aspect of the ruin, shaped like a phallic shaft, that asserts masculine power as it dominants the landscape, the figures and the entire painting. The castration complex is also implied in the erect positioning of the women’s elongated limbs; all of their gestures are violent, forming straight lines, pointing, waving or just holding an arm in a rigid position which is unnatural and uncomfortable,  but provokes the notion of the phallus. Despite women being the main feature of the painting, and the only figurative aspect, they fall into insignificance in comparison to these references. Even the title of the painting “Women bathing in a Landscape” seems irrelevant as they don’t seem to be bathing at all, they are just in a landscape.

These women are just there to be looked upon, objectified for and by the male gaze. It seems however in this image that these women are not so much sexually objectified, just oppressed further by male scopophila as a sub-human, an animalistic representation of the female gendre.

This contemporary, psychoanalytic reading into Poelenburgh’s “Women bathing in a Landscape” is obviously completely alternative to the traditional interpretations of style and content conventionally applied to a 17th century piece. But does it hold relevance? Has a deeper understanding into the artist and audience of the ‘Dutch Golden Age’ of painting been achieved?