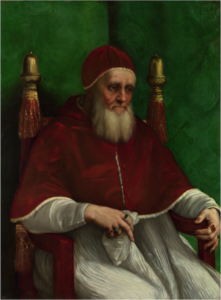 Applying any kind of contemporary art theory to such a canonical, High Renaissance painting at first seems impossible, ridiculous even. But after a few pondering minutes in room 8 the thought processes begin to flow and contemporary references can suddenly be seen all over this work.

Raphael’s use of complimentary colours, red and green, in the background and on the Pope’s robes conduct similar theories as in seen in the 1940-1950’s American abstraction movement; Colourfield painting. Post-modernist return to the figure is evoked in the juxtaposition of the flat planes of colour and a realistic portrait. Such realism in physicality and emotion permits a reaction in the viewer, a sense of empathy and involvement as is the aim of relational aesthetics. In this gallery space though the work evokes a passive reaction rather than an active, physical involvement normal to relational aesthetics; the viewer is not a catalyst to the work, but instead a recipient of it’s power, emotion and messages.

Raphael’s image is a true, renaissance application of the portraiture genre; it is a realistic, yet slightly idealised, representation of the sitter. It does exactly what portraiture proclaims to achieve, a faithful representation of nature, but as with all portraits, especially in contemporary photography, it depicts something that is not there. Something that is not true. It depicts only what is absent, giving presence to that which no longer exists. Portraits are a present residue of the absent past, creating a metaphysics of presence that is core to the genre, and has been since the 14th century.

Even “Portrait of Julius II” with its fame, painterly medium and roots in the Italian High Renaissance plays with the notion of photography and memory, capturing an absence, a shadow of the real. History portraits, such as this one, also capture the history of power and authority in their images, idealising the wealth of the sitter, celebrating them but also permitting a self-celebration of the medium. This celebration generates two collateral effects in the painting, attempting to capture both the individual personality, emotion and psychological interior of the sitter, as well as the wealth, lifestyle and temporal authority of the head of state. Whist the image does depict personality it also falls into the same format and process that is typical of portraiture; there is lack of individuality in repetition in the genre, figures are shown in the same way, the same role, scale, position and the same intended interpretation. All portraits of VIP’s do this, and have done this since the early Renaissance. Portraiture is shown here in it’s institutionalised form.

Portraiture exists in a constant paradoxical circle, emphasising personality whilst also erasing it, finding and losing identity in the same image, representing both presence and absence. In Raphael’s portrait there is intention to be true to the real, the painted image does look like the sitter, but is not a mere reproduction. It does more than this; it displays the spiritual and temporal authority and wisdom of the sitter and the state.