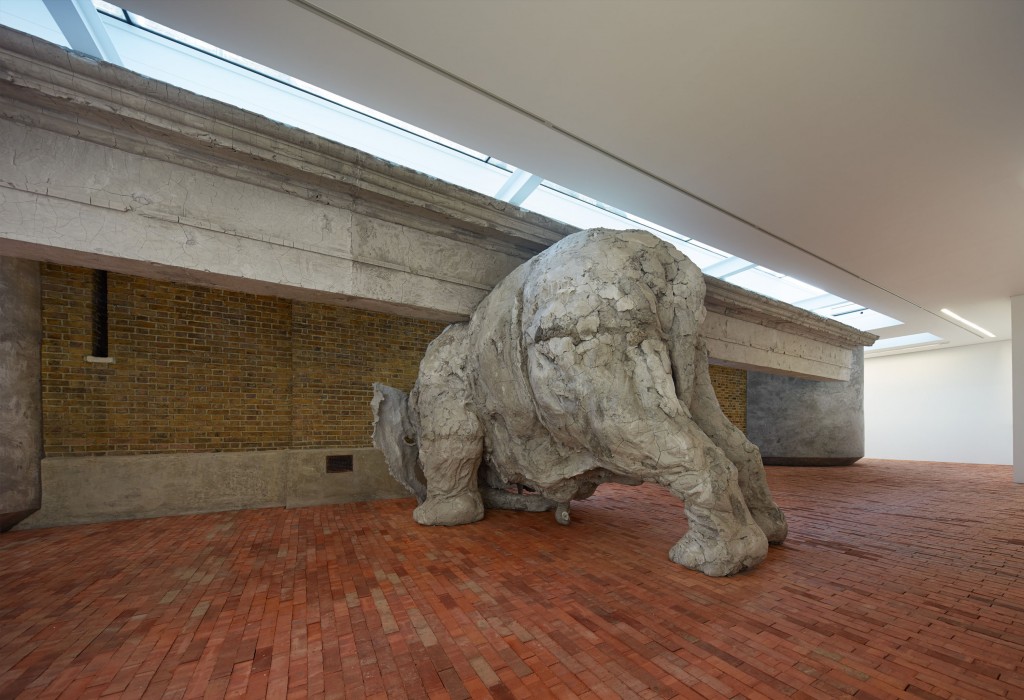 It’s a she-elephant, the Argentinian artist Adrián Villar Rojas confides to your correspondent from behind sunglasses.
He’s not a man who seeks media attention but he’s talking about the 3-tonne sculpture that presents its backside to you on entering his solo show, the inaugral exhibition of the Serpentine Gallery’s new Sackler Gallery. Anyone who wondered about the elephant’s gender would be frustrated by the way her tail hangs.

Any show that opened at the Sackler had to be big. From merely an ex-teahouse, the Serpentine has established a global reputation on par with the mightiest players, so there’s a lot to live up to. Furthermore, when Zaha Hadid designs the conversion of an 1805 ex-gunpowder store into gallery space with a divinely curvy extension, that enhances expectations. The Serpentine’s selection of Rojas is sharp- born in 1980, he has already established a reputation with installations from Venice to Afghanistan that use clay, sometime on a giant scale, to subvert ideas about time and scale. His 28m-long Mi Familia Muerta, a whale stranded in woodland at the 2009 Ushuaia End of the World Biennial, Argentina, is one of the most moving sculptures created this century. 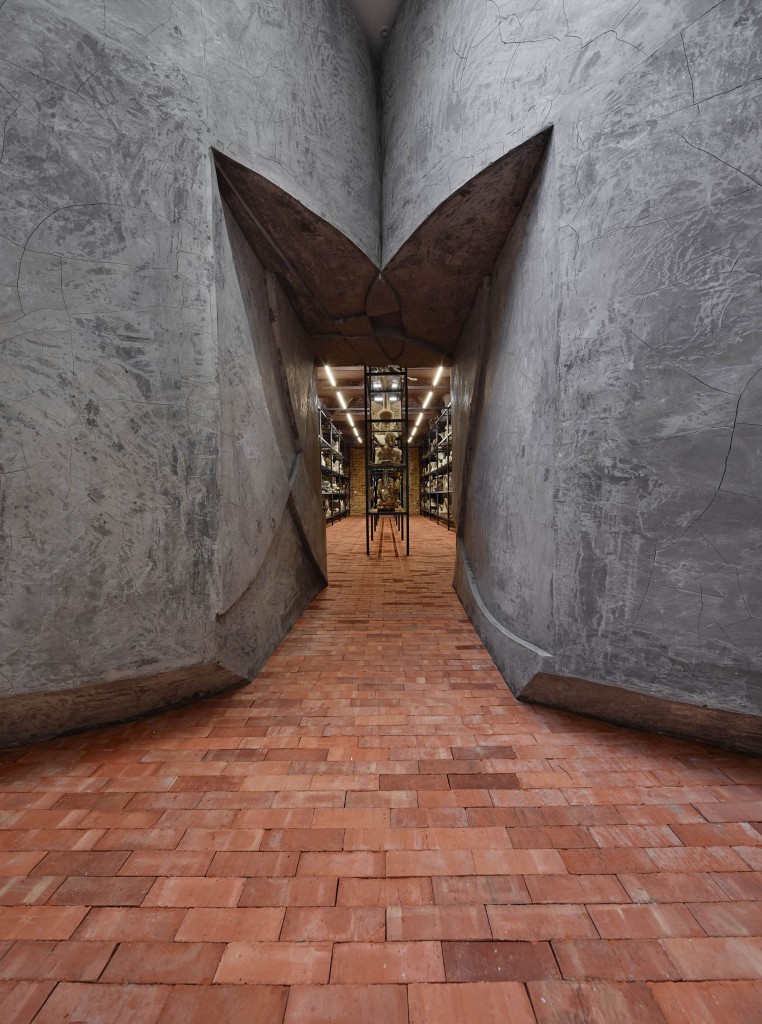 Adrián Villar Rojas Installation view, Today We Reboot The Planet Serpentine Sackler Gallery, London © 2013 Jörg Baumann
At the Sackler, Rojas had two adjacent internal rooms and the space around it to deal with. He alters the latter acoustically by paving it with 45,000 bricks, which make a quiet crunching sound when walked upon, and slow the pace. Already, he is playing with time. ‘How I work with time is not linear- it’s to do with quantum mechanics’, he says, referring to things like Heisenberg’s Uncertainty Principle and paradoxes of simultaneousness. Rojas also has a long interest in bricks. His studio in Rosario, Argentina, is by a brickworks, but these were made by Northcot Brick of Gloucestershire.

Walls around the internal galleries are entirely clad with a frieze of abstract grey forms, creating narrow entrances each like the portal to a megalithic burial chamber. Indeed, one gallery is has sacred tranquillity because Rojas has left it bare, evoking, his only intervention two stained glass windows high up with the rafters at either end. He says that ‘the empty space attempts to create a state of confusion… What has the artist done? What was here before, is it something Zaha did? It’s a beautiful confusion’. 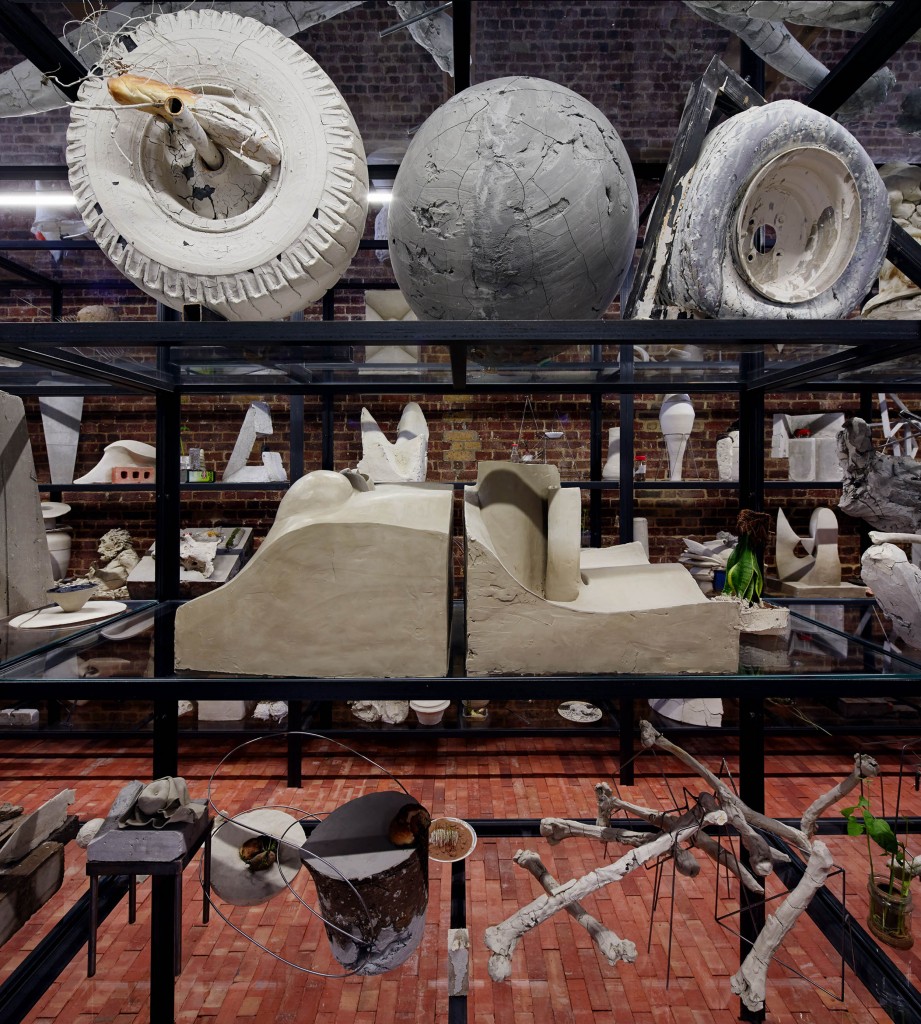 Adrián Villar Rojas Installation view, Today We Reboot The Planet Serpentine Sackler Gallery, London © 2013 Jörg Baumann
The other space is like a store room, 2,000 objects crowding three stacks of shelves, all made or gathered in Rojas’ temporary base in Stratford. The randomness and numerousness of this cornucopia may recall Fischli and Weiss’ room of black rubber objects in their 2006 Tate Modern show, but these are mainly clay, their scale varies, and they intrigue rather than amuse. ‘ ‘The vocabulary I use is always in a state of expansion’, comments Rojas. Human forms (including Kurt Cobain, penetrated by plastic bottles), a massive straight-edged block, abstract shapes, vases, all in a cracked clay suggesting great age, sit alongside greyed things like a tyre and iPods. Some are found objects, most are crafted. There is a deep dimension of age here- but are these relics from the past or future? There are organic objects too- a loaf of bread squashed by concrete, plants offering little splashes of green in the grey, some moss growing on a small stone. How will the organic objects change over the short time of the show?

And then there is the elephant, pushing into a reception wall with a horizontal beam- a copy of the external facade’s long lintel- cutting into her back. Is she holding it up or being crushed by it? ‘It’s a traditional sculpture’, Rojas comments. ‘The elephant is frozen, there’s no rhetoric to it’. Clearly, he wants the viewer to draw their own conclusion. I suggested that the elephant was in a dying act, like Hercules at the moment of bringing the temple down. It seemed like a new idea to Rojas, but he didn’t reject it.

Rojas reminds us of Heisenberg’s truth, that ultimately we can be certain of nothing. The show’s title, ‘today we reboot the planet’, may be the only reference to the present, because this is about decay and ossification, transience and persistance. At least, it should reboot our perspective on civilisation and its trivia in the great expanses of deep time.

Watch a video preview of the exhibition HERE