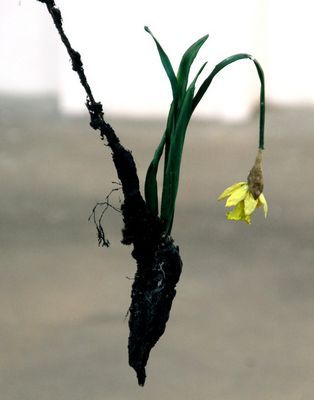 The original call for work asked for pieces that looked ‘to examine our understanding of the natural environment, and the ways in which this is influenced by different methods of constructing meaning – across literature, science and the arts – with specific reference to thinking around the archive’: how and why do we store nature and in what way do the structures, processes and materials of storage affect and reflect our understanding of what we store?

The resultant exhibition comprises over 30 artworks produced by a total of 12 contemporary artists, two volcanic rock specimen trays (from the collection of Dr Johnston-Lavis, on loan from UCL Geography Collections), two trays of labels eerily detached from their specimens (on loan from The Grant Museum, London), and one bespoke herbarium cabinet complete with fern specimens (on loan from the South London Botanical Institute). Most of the artwork (16 of the pieces on display) is, however, two dimensional: 7 photographs, 3 photograms, 5 drawings, and one stone lithograph and screenprint. 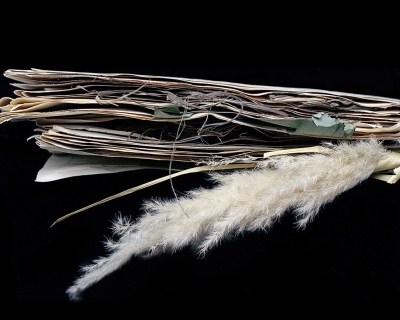 Liz Orton, Splitters and Lumpers 5, 2012 – Image courtesy of the Artist and GV Art gallery, London
The Splitters and Lumpers (2012) series by Liz Orton is, visually, very striking: three photographs of ‘as-yet unclassified plant specimens’, in profile, that incorporate an array of plant matter spilling from their sides.
This links well with the herbarium cabinet and other archive material on display in the basement. Anais Tondeur’s drawings of the surface of the moon (Mutation of the Visible, 2013) move from a mirrored sense of earth to a more microbial impression of lunar surface, mapping a development from pre-Modern scientific records to 21st century lunar reconnaissance. These drawings comment interestingly on how and why we understand the natural world in relation to the practices and technologies available to us at the time. But, overall, these two dimensional pieces left me feeling rather.. flat. I mourned the absence of the actual trays of decayed specimens that Helen Pryor had photographed; only the photographs remain. Wouldn’t it have been wonderful if Theresa Moerman had been able to cut the leaf impression (I Like to Leave an Impression) out of the concrete block instead of just photographing it, or (more feasibly) if she had been able to present the wire coil amalgam photographed in Backbone (2013) as a physical piece? (It was too fragile to travel). But perhaps this is part of Jeffreys’ point: to provoke a feeling of disjuncture between the live presence of a thing and its mode and method of representation and to ask whether or not this representation is sufficient? How do we value these things differently? I know I would pay a lot more for the actual objects than I would for their photographic representations.
Unsurprisingly then, the pieces that most impressed me in this exhibition were the more multi-dimensional works. 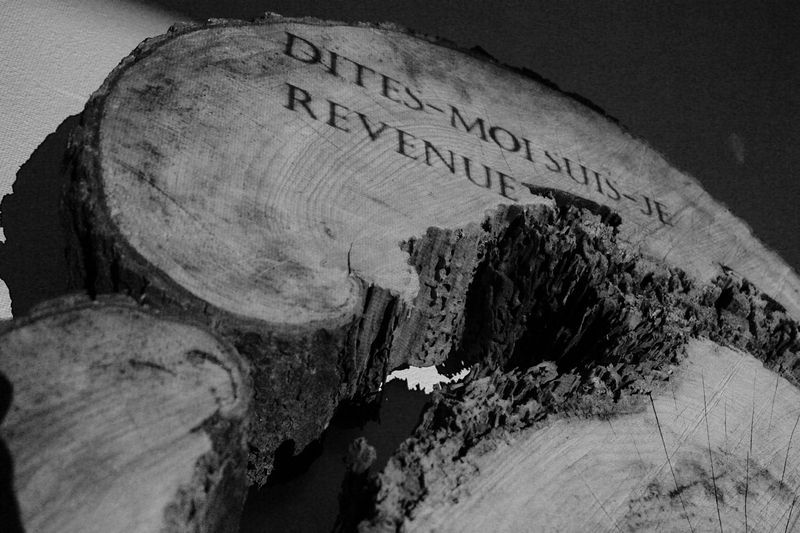 Amy Cutler’s PINE (2013) asks a two part question projected onto a slice of pine trunk infested with wood worm: ‘Dites-moi, suis-je revenue de l’autre monde?’ This piece evokes questions concerning life, death, resurrection and the role of the wound. The pine trunk slice appears to curl its arms around its wood worm wound, at once protecting the wound and attempting to overcome it, or seal it, drawing attention to that which returns and to that which is already here: what is retained or (p)reserved, in the present, of the past? Are the traumas of the past revisited on the present through wounds such as these? What does it mean for wood to remember? Continuing from these questions regarding the relation of life and death, Laura Culham’s beautifully detailed paper plant sculptures are, most particularly in the case of Dead Grass (2012), unbelievably life-like; still life is given a whole new meaning. The care with which these sculptures have been crafted pays tribute to the processes that bring about their existence in the first place: if we think these works are so valuable as ‘art’ why do we not attribute the same worth to the things themselves (Weeds 111, 2013)? And, although we can only imagine the effort it takes to make one blade of grass, on the opening night those who were brave enough were able to get so close to the microbes in Hestia Peppe’s Microbial Familiars they could actually taste them: small quantities of the kombucha yeast-bacteria colony were available to drink. If the influence of materials and the incorporation of the processes of making and crafting are themes that run throughout this exhibition they were nowhere more tangible than in Peppe’s piece.

Among the many highlights of this exhibition, however, it was Sally Ann McIntyre’s work was the most consistently transfixing as well as the most actively engaged with Jeffrey’s original call. Unfortunately, her pieces are also among the few works that are not currently for sale. McIntyre has two pieces in this show: Huia Transcriptions (2012) and Collected Silences for Lord Rothschild (2012). The Huia piece comprises an audio recording of both bird call and music box representation of this call, the music box and paper by which to play this mechanical call yourself, and a heavily disrupted textual comment on how the bird received its name. McIntyre frustrates the reading process by disrupting and reordering the words into an almost indecipherable recodification, so much so that many may give up trying to get any meaning out of it at all.. Don’t! The reward in deciphering what these words say is the key to the piece. The time you spend poring over these disrupted words echoes the time taken to understand and record the sounding of the Huia itself. McIntyre’s method of slowing down the reader’s perception sets a benchmark for the way in which you go on to engage with the audio piece afterwards. The beauty of this work is facilitated by McIntyre insistence that you enact something of the process by which the Huia’s call was first understood and in doing so, incorporate a realization of how and by what means this knowledge is accessed, processed and stored, first hand.

In sharp contrast to the music of the Huia piece, McIntyre’s Collected Silences presents the ugly sound of extinction. This time, there is no music; there are no bird calls. In place of these, we hear only the hum of the building in which these dead birds are stored, the occasional murmur from the body of the artist and the monotonous aural imprint of the audio equipment itself. The presence of each of the small sound reels used to make these recordings, in front of you, suggests a link between the presence of these storage methods and materials and the absence of that which is recorded.

The trays of labels detached from their specimens, displayed in another part of the gallery, reinforce this allusion to extinction. The descriptions, types, colours, sizes and textures are as various as the (now only imagined) specimens to which these labels refer. These trays include instructions on how to treat or prepare the specimens in order to preserve them for display, hand-written corrections of existing descriptions and even short stories, as in the case of ‘Pig at birth’ (written to accompany a miscarried full-term pig foetus) that are presented as works of art in their own right. Other items referenced include ‘Panthera Leo’, ‘Penguin Fore-Limb’ and ‘Homo Sapiens: Skull of Australian Native’. This reference to the human, as just one of a multitude of possibly absent specimens, provokes a sobering evaluation of our presence here on earth.

There is a lot of death in this exhibition. The disturbing suggestion that our drive to know and to store might have a hand in nature’s destruction raises some serious questions: is our drive to represent, to know, to create, part of the problem that pushes the existence of species, including our own, to the point of extinction? Does our drive to preserve actually endanger? On Thursday 29th August the exhibition’s curator, Tom Jeffreys, fires up the debate on how these treatments and structures of storage affect and reflect our conception and construction of nature. If these are questions that concern you, as I believe they do, this is a moment to enjoy the real riches of this exhibition: whether or not you are able, or even want, to buy one of the pieces on sale you are all invited to revel in the questions it provokes and the responses it solicits, and this is most certainly something worth celebrating.