Our final day in Venice is grey and rainy and involves a hell of a lot of walking, as we attempt to hotfoot it around as many of the pavilions and collateral exhibitions as we possibly can.

Tom: We start off at the sumptuous Palazzo Contarini Polignac for the Future Generation Art Prize, an initiative of Ukrainian squillionaire Victor Pinchuk, featuring a host of the usual faces on sundry advisory boards and selection committees – Damien Hirst, Jeff Koons, Elton John, and Sir Nicholas Serota (who, incidentally, is striding around the exhibition at the same time as us).

Crystal: That might explain the presence of painter, Lynette Yiadom-Boakye, who despite appearing on this year’s Turner Prize shortlist (and also in the main Encyclopaedic Pavilion exhibition), was still awarded the main Future Generation prize.

Tom: The same could be said for Portuguese duo, Gusmão and Paiva, who have a number of works in both exhibitions (their film work in the Arsenale being significantly more interesting than their sculptures here).

Crystal: Not exactly the “future generation” then is it! The whole closed-circle self-vindicating prize system drives me absolutely bonkers.

Tom: There is some good work though – much better than last year, for sure. We both liked Rayyane Tabet’s floor-based cityscape, although it looked like it had taken a battering from the party the night before; whilst André Komatsu’s gold-painted rubble seemed to me a witty comment on Venice and the glamour of decay. But it was the fantastically named Aurelien Froment whose beautifully shifting short film about jellyfish was the stand-out for me. 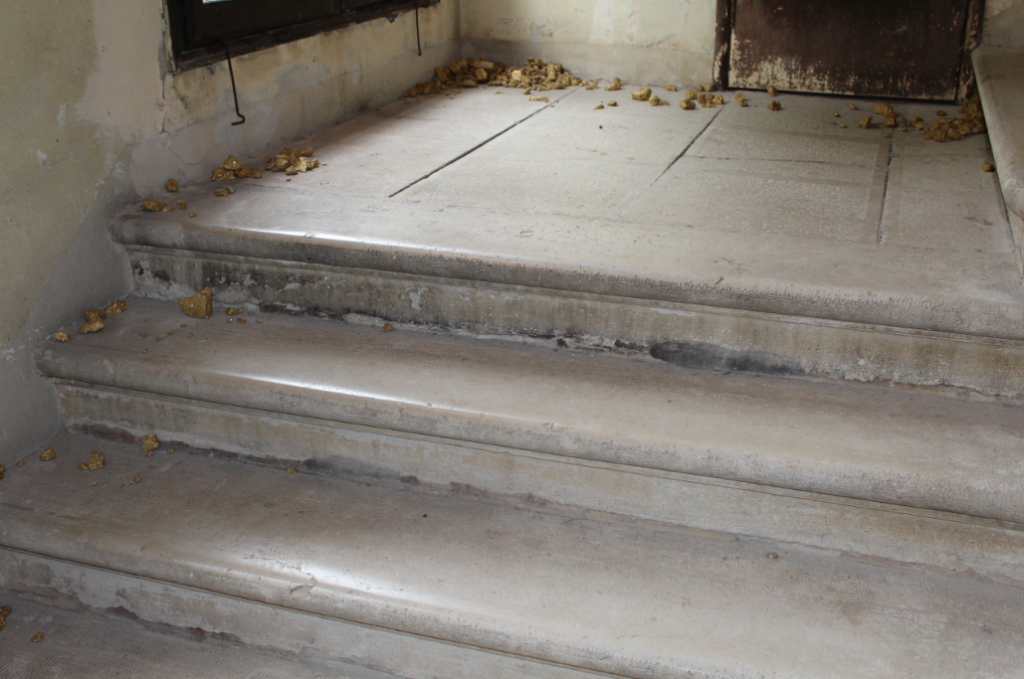 Crystal: I could not disagree more! What a load of crock it was. I do love a good jellyfish and, while I’ll admit that this one was an exceptionally beautiful specimen, the film voiceover was like a natural-history museum guide on downers.
And considering that’s pretty much all there was, I simply cannot recommend it.

Tom: Ah but that’s where you’re wrong! There was much more being explored here than “natural history” – myth, for one, and the construction of the wild. I loved the self-reflexive turn which suddenly jolted you into an awareness that this was not filmed deep in some fathomless ocean inaccessible to humans, but in a carefully spot-lit tank in an aquarium in Monterey Bay. And the voice itself was hilarious.

Crystal. Have it your way! I did agree with you about Rayyane’s work though – a wonderful and imaginative floor full of tiny concrete-casts of wooden blocks. It had a childlike quality about it, while still being beautifully conceived and installed. Really super. There were a few other things I didn’t hate {also Komatsu’s rubble, and Mykyta Kadan’s enormous mausoleum-like sculpture with a wall of bread rolls stuck to the back, which made me chuckle), but the problem with exhibiting in the Palazzo Polignac, is that the works don’t stand a chance against the absolute splendour of the building’s interiors. 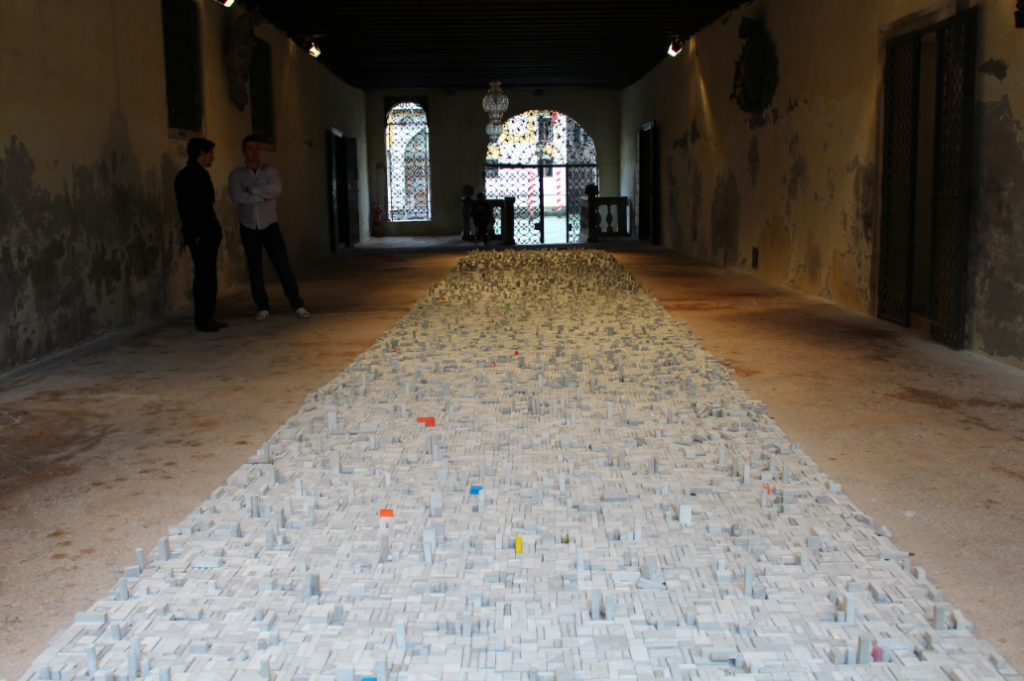 Tom: True, and that’s a perennial problem with showing contemporary art in Venice. Over the course of the rest of the day we do pretty well to get round Ink * Heart * Brush (truly, inexplicably terrible), Azerbaijan, Central Asia, Estonia (very neat and pretty, featuring lots of books and documentation-type material, but again, ultimately rather pointless) and Bosnia and Herzegovina.

Crystal: No idea what was going on here – particularly baffling was this quote on a stone plaque in one corner: “From kitsch to blood there is only one step”! 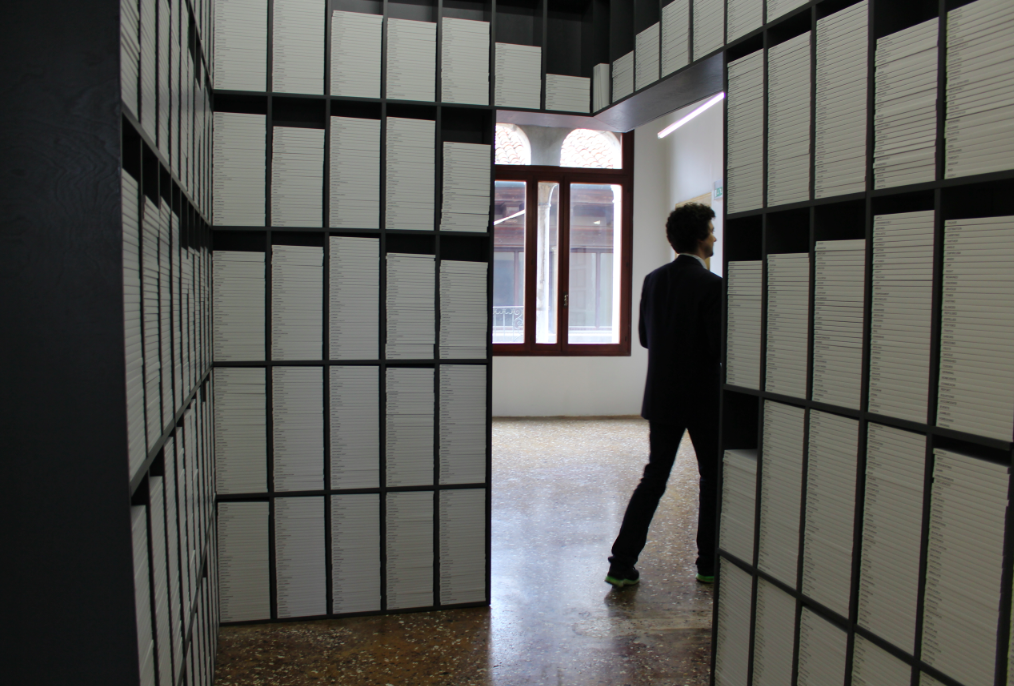 Crystal: Then we walked around for bloody ages trying to find the Arthena Foundation because I wanted to see Thomas Zapp’s exhibition because the name of it was mental – Comparative Investigation about the Disposition of the Width of a Circle. I was a bit disappointed when we finally found it, though, especially since Zapp clearly hadn’t gotten the memo that immersive, experiential, set-design-tastic installation pieces were all the range at the 2011 Biennale. 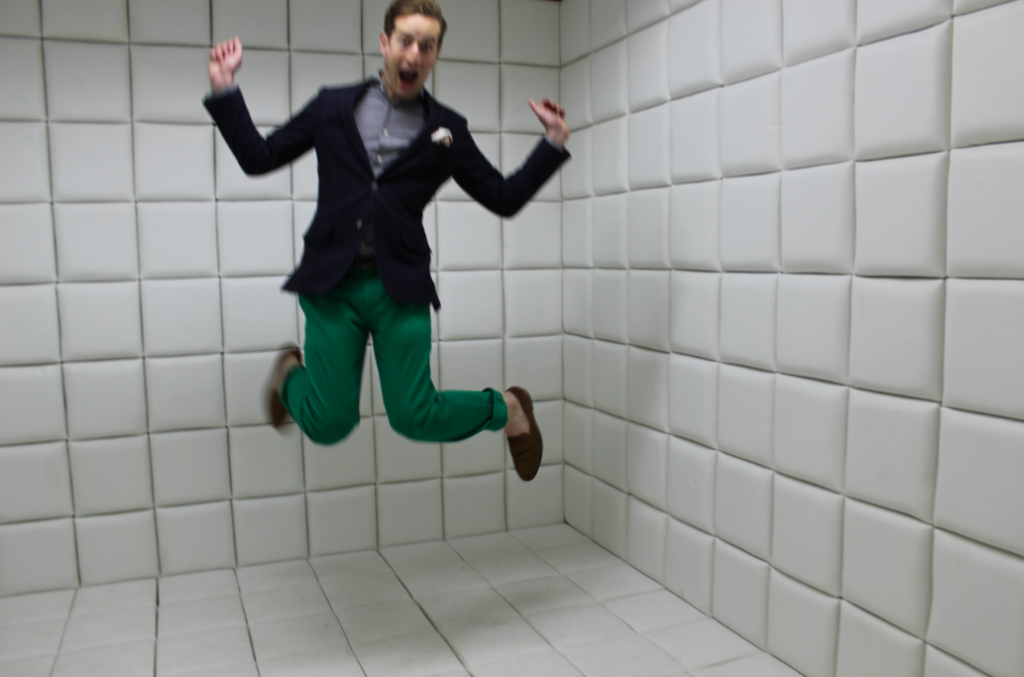 Crystal: Indeed, that was fun! If a tad inappropriate, perhaps…

Tom: Then there were those two rather dreadful exhibitions (the Cuba pavilion and a collateral exhibition called Art & Knowledge) in the incredible National Archaeological Museum and Biblioteca Marciana on Piazza San Marco.

Crystal: Oh my word, that Art & Knowledge show – don’t even get me started. But what a glorious, glorious room. It seemed an absolute shame that a better pairing wasn’t made for that beautiful place. Luckily, in one of the annexe rooms, there was an incredible 15th-century map of the world, all wonky and upside down, quite confusing to get one’s bearings. We asked a lady working in the library to explain what it was and she said that it was by Fra Mauro, and that he’d created the map only from the stories he’d heard from various travellers (so, for example, his cartography of Asia was informed by Marco Polo) – he’d never left Venice in his life. It’s funny because this is the same kind of thing that I think Gioni is trying to do with his exhibition; only the surprise of coming across this map so unexpectedly, and, perhaps more importantly, on its own, shows how ineffectual the Encyclopaedic Palace concept is. 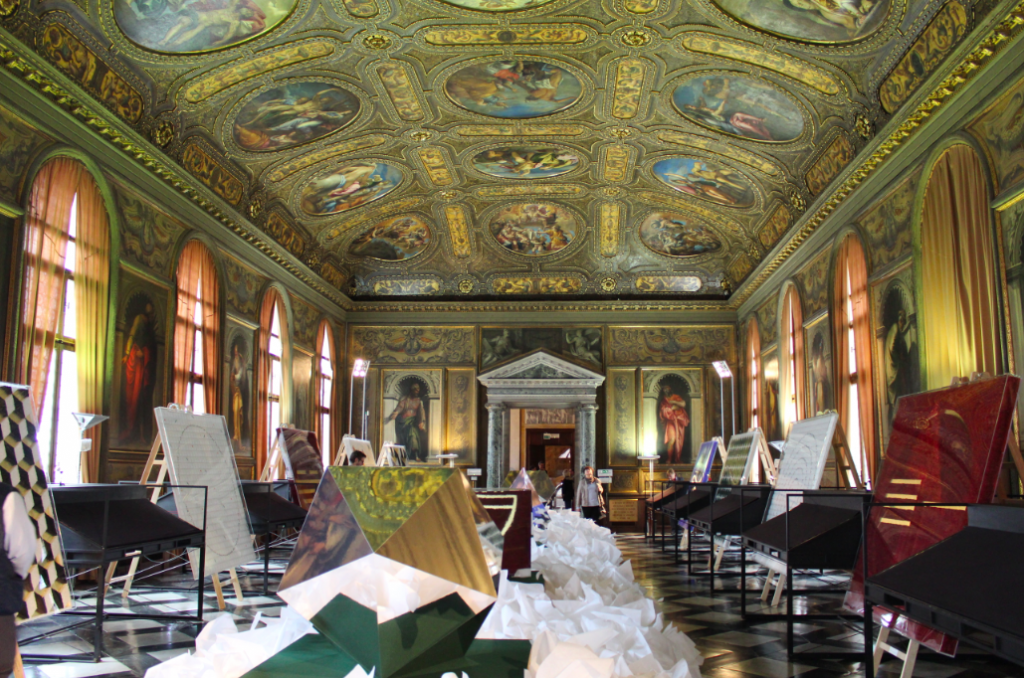 Tom: Also, maps are just intrinsically brilliant. We then ambled next door to the Norway pavilion which was interesting – featuring lots of works by Edvard Munch alongside a lengthy video piece by Lene Berg.

Crystal: I actually didn’t care for any of the works by Munch. I did, however, very much enjoy Berg’s film. In fact, considering how much I normally can’t stand video art, many of my favourite works this year are video pieces.

Tom: Yeah, surprisingly, I really liked that film too. I mean the ideas weren’t exactly anything especially mind-blowing – sex and power and identity and surveillance – but it had humour and strong characterisation and a narrative drive – none of which are things you usually associate with video art!

Crystal: Also, I really liked the way she used the trope of telling the same story from the point of view of each of the three protagonists of the film. It was very nicely done. But the highlight of the day, and probably of the whole trip was Richard Mosse’s work in the Irish pavilion. This was just outstanding. For one thing, it was so visually captivating. I couldn’t take my eyes off of the photos, and then later the films – they were shockingly beautiful to look at thanks to his experiments with infrared film. Then, while the beauty of the images was working one part of your brain, the horror of the subject matter started to become apparent to another part of your brain and the whole thing kicked off these fireworks of cognitive dissonance. There is so much skill and dexterity required to construct images such as these, images which continue to captivate long after you’ve understood what they are. Conrad called it “the fascination of the abomination”, and I don’t think I’ve ever experienced a more convincing example of it in contemporary art than in Mosse’s work. I take my hat off to all involved. 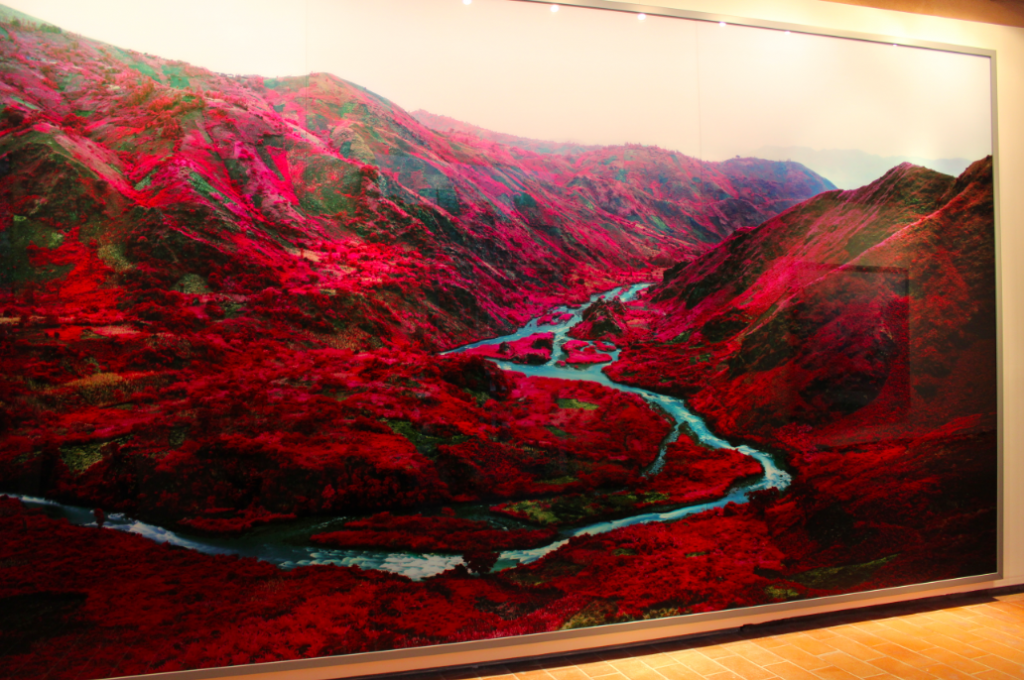 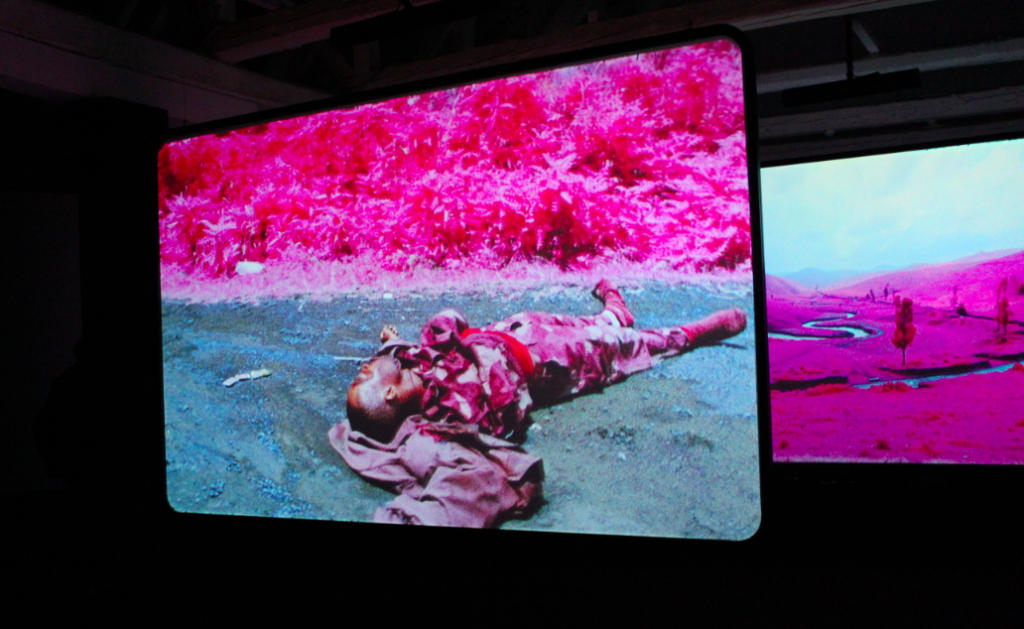 Tom: Yeah, I completely agree. I was familiar with Mosse’s work from the Gordon Cheung-curated Immortal Nature exhibition at Edel Assanti back in 2012, so I was really looking forward to this. But I was apprehensive too: for me, the strength of his work had been the sense of latent threat within the landscape, and I was worried that the more direct focus on war and political violence would somehow compromise that, but I was completely wrong. The video installation was completely beautiful and genuinely harrowing. It touched on so many of the threads that ran through the rest of the Biennale – the relationship between documenting subject and documented object; the resistance of the world’s complexities to singular narrative overlay; the overlooked and oppressed; the violence of exclusion – but with so much more urgency, dexterity and force. Totally brilliant.

Crystal: Anything else? I think I’m worded out about art, to be honest.

Crystal: Well, It’s been an interesting Biennale, for sure – all things considered I’d say it’s a much more satisfying experience – aesthetically and intellectually – than two years ago. That’s a wrap from the 55th Venice Biennale. See you on the flipside. 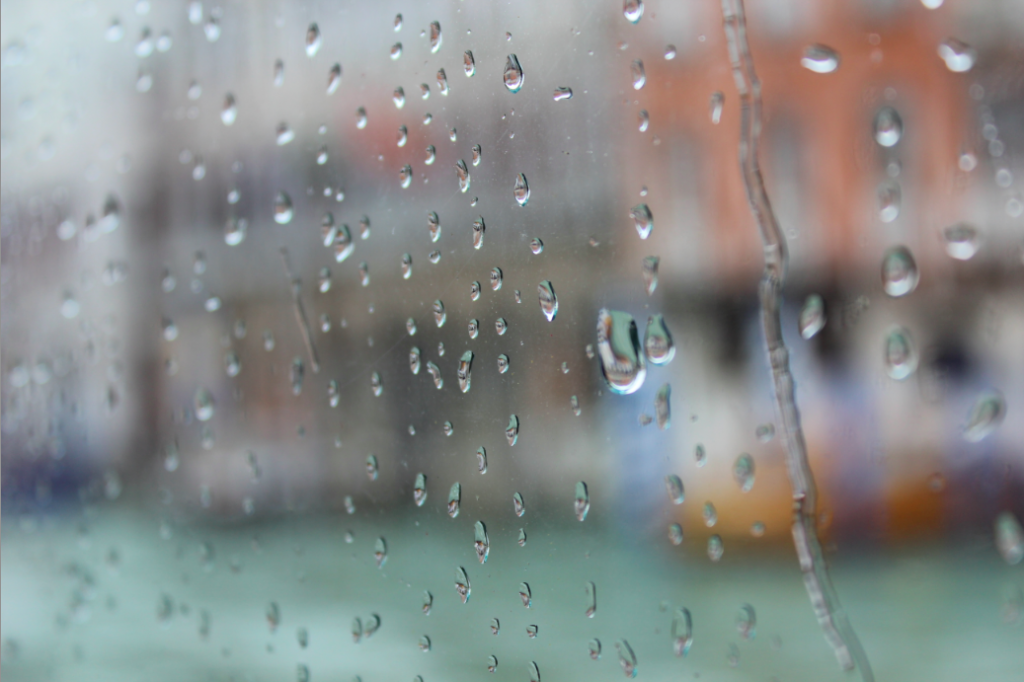 Tom Jeffreys is an art critic and occasional curator. He is the Editor of the Journal of Wild Culture, an online magazine exploring the intersection between nature and culture.

Dr Crystal Bennes is a writer, curator, maker and cross-pollinator. She is the Co-Editor of Pages Of Magazine and a Contributing Editor at Icon Magazine and Domus.