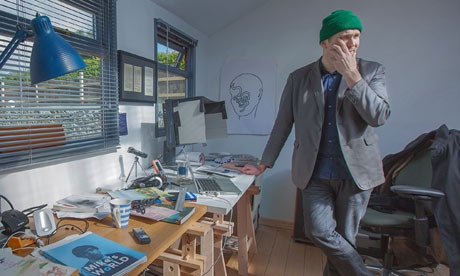 Witty engagement … Williams in his shed. Photograph: Steve Peake for the Guardian

This article titled “Bedwyr Williams: why I’m taking a space observatory to Venice” was written by Stuart Jeffries, for The Guardian on Sunday 14th April 2013 17.00 UTC

Bedwyr Williams is building an observatory. When it is assembled, he will place a pair of slippers and a Thermos inside as finishing touches. “I’m not interested in astronomy so much as astronomers,” he says.

The observatory is part of the Welsh entry to this year’s Venice Biennale, and will be shown for six months in a former convent. Galileo presented his first telescope in Venice; Williams will now present his own homage to the amateur astronomer, a temple to a nocturnal sub-species. He has called his installation The Starry Messenger, a translation of the title of Galileo’s 1610 text Sidereus Nuncius.

Williams, who is 6ft 3in with a gap in his teeth like Jimmy Tarbuck’s, recalls driving through north Wales as a boy with his dad one starry night. “It was cold, and we had the sun roof open. I looked up and said: ‘Bloody hell – it’s amazing. There’s a lot of unknown out there!’ And Dad said: ‘It doesn’t pay to think about that too much.'”

Williams’ heroes are amateur astronomers like Phil Shepherdson, who built his own telescope using catering-sized baked-bean cans held together with coat hangers; and Moelwyn Thomas, who built an observatory in his back garden. Both men recently appeared with Williams at a convention of stargazers and astrophysicists in Cardiff, where the artist performed a piece called The Astronomer. He invited the audience to imagine themselves as moles, crawling in through the cat flap of a domestic semi to spy on an astronomer who is standing in the kitchen admiring his own observatory.

Where does his obsession come from? “It’s got all the trappings of a less important hobby,” he explains, “the glorified shed in the back garden. But there’s something charming about it, too. As the sun goes down, these things come on. People around the world become an eye looking out. And it’s one of the few hobbies that is important for science: amateur astronomers spot comets, because the professionals are too busy to do the donkey work.”

Williams wants his installation to be a corrective to the contemporary derision for hobbyists – be they trainspotters, Airfix junkies or astronomers. “We’re in a dark age, and humour and entertainment are the problem,” he says. “We make fun of the wrong people.” His contention is that the alternative-comedy scene put new targets in the crosshairs: “In the 1980s, it became OK to make fun of trainspotters and other weirdos.” He cites an early 1990s Punt and Dennis sketch about a character called Milky Milky. “They were making fun of people with mental illness. That’s not telling a joke – it’s just pointing. The best comedy reveals something you didn’t know, rather than confirming your assumptions.”

He says this with feeling, having been part of a derided sub-species himself: as a boy growing up in Colwyn Bay, north Wales, he was a model-railway enthusiast. “The snooker club were rude to us,” he recalls, reopening a psychic wound. The problem was that the snooker club and the model-railway club shared the same premises; the rail hobbyists had to pass cue-wielding roughnecks to get to their room. Or, as Williams poignantly puts it in an essay for a 2005 exhibition, Tyranny of the Meek: “Every week we had to pass through the darkened hall and humour its beery provosts in order to earn the right to enter our papier mâché Lilliput.” Tyranny of the Meek was, in part, Williams’ revenge: it consisted of six snooker tables turned into a miniature landscape for a model railway to ride triumphantly over.

That installation is typical of the 38-year-old artist and standup’s oeuvre. In Walk a Mile in My Shoes (2006), visitors were invited to try on a pair of Williams’ size 13 shoes and walk around the gallery. Each pair carried an explanatory tag – for instance: “These are the sandals I might wear to renovate my holiday home in France. The locals would be right to hate me.” At last year’s Frieze art fair in London, Williams made a cake cadaver. Anatomically correct, it represented a murdered curator, and visitors were encouraged to eat it. He once built a Teasmade that drowned a model Welsh village in tea every morning, to represent the Welsh reservoirs built to provide water for England.

That witty engagement with his homeland is a hallmark: Williams has also operated a mobile nightclub in the back of a caravan called the Blaenau Vista Social Club; taken a self-portrait as a sheep farmer in Welsh homage to the painter Caspar David Friedrich; and another dressed in Birkenstocks, harp and fake beard, for a project called Bard Attitude.

Behind the buffoonery, Williams is always making a serious point, as the Guardian’s Adrian Searle pointed out when selecting him as one of Britain’s most promising artists in 2004. His serious point in The Starry Messenger is that Britain has lost a valuable hobby culture. What happens to our Heath Robinsons, our Fred Dibnahs, while everyone else chillaxes to Scandi noir or Ant and Dec? What has happened to the great British eccentric?

Fittingly, we are discussing these questions in Williams’ garden shed in Rhostryfan, a village above Caernarfon in north Wales. His house, he says, was built in anticipation of a 19th-century slate rush that never came. In the abandoned quarries above his house, they filmed portions of Tomb Raider; further up in the mountains, Darwin went on the geological hikes that would prove so important in the development of his theory of natural selection.

He bought the shed on eBay for £500 and assembled it with his dad, getting a nasty scar on his chest in the process: a badge of honour. (Williams says that since he erected the shed six weeks ago, the men in the village have taken him more seriously.) It is a big affair, with galvanised steel walls to protect it from Welsh wetness, and space not just for a drawing board and computer but a fine collection of books by the artist’s comedy heroes: Tommy Cooper and Peter Cook.

It’s an artist’s studio and, like Montaigne’s tower room or George Bernard Shaw’s rotating shed, a refuge from the quotidian world. There’s even a skylight, though disappointingly, no telescope. He tells me how much he admires the cover art for the Blur album Modern Life is Rubbish. This is not all that surprising: it’s an oil painting of a LNER Class A4 4468 Mallard steam locomotive. But with Williams there is a sense that modern life has indeed turned out to be rubbish. “I’m interested in the last embers of the time before uPVC,” he says at one point. And later: “Morrissey was right when he said it was all over for Britain when the first McDonald’s opened.”

Williams powers up his computer and takes me on a virtual tour of his Venice installation. Visitors will be in the dark as they stroll around the model observatory, but will hear birdsong and other ambient noise to simulate a suburban garden at night. “There will also be the sound of weeping, though whether it’s weeping for joy or sorrow won’t be clear,” he says. He wants a mood of contemplation. “I used to go to chapel twice a day, and the experience was of zoning out. I want visitors to experience that.”

The view of the observatory will be obscured by curtains of theatrical scrim depicting terrazzo – a composite material used to make kitchen flooring, which was devised in Venice as a way of using up surplus marble chippings. This links up, Williams explains, with his interest in cosmic dust. “It’s about looking into the great beyond and the microscopic as well. The stars and dust at the same time.”

Beyond the observatory, there will be a koi carp pond filled with polyurethane terrazzo floating on top. “A sound recordist in Anglesey has recorded ice cubes clinking in his bath that you’ll hear as you look at the pond.” But polyurethane wouldn’t clink. “I know,” laughs Williams. “But I love that disconnect – like when you’re played bat noises, which by definition you can’t hear.”

In the next room of the installation, visitors will confront a giant coffee table. “You’re below,” Williams explains. “Above, there are 101 household things – vases, coins, vacuum cleaners. It will look like a kind of solar system.” This is very Bedwyr Williams: a domesticated cosmos, or domesticity celebrated on a cosmic scale, depending on your point of view.

What Venice and the art world will make of The Starry Messenger is anybody’s guess. What Williams makes of the Biennale is a matter of public record. In 2005, he spent three months there as Wales’s artist-in-residence and recorded the miserable experience in a rueful diary called Basta (Italian for “enough”). It wasn’t so much the art world he was lampooning, but his role in it. He’s comfortable doing that. (He has published a book of all his performance scripts and crib sheets entitled Bedwyr, I Think I Missed Your Performance, anatomising his failure to be a player in the globalised art world – through an inability to speak the lingua franca of the curator; fear of flying; ineptitude at holding on to taxi receipts; his non-metropolitan awkwardness.)

This time, Williams will go to Venice not to send himself up, but in the hope that The Starry Messenger will shock and awe. “I want to do something big so that people ask: ‘How did they get all this from Wales?’ The answer is that it will be shipped in a flat pack and then reassembled.” If it works, it will be as unexpectedly sublime as the stars seen through the sun roof of his dad’s car.

• The Starry Messenger will be at the Ludoteca Santa Maria Ausiliatrice, Venice, from 1 June to 24 November. Details: labiennale.org