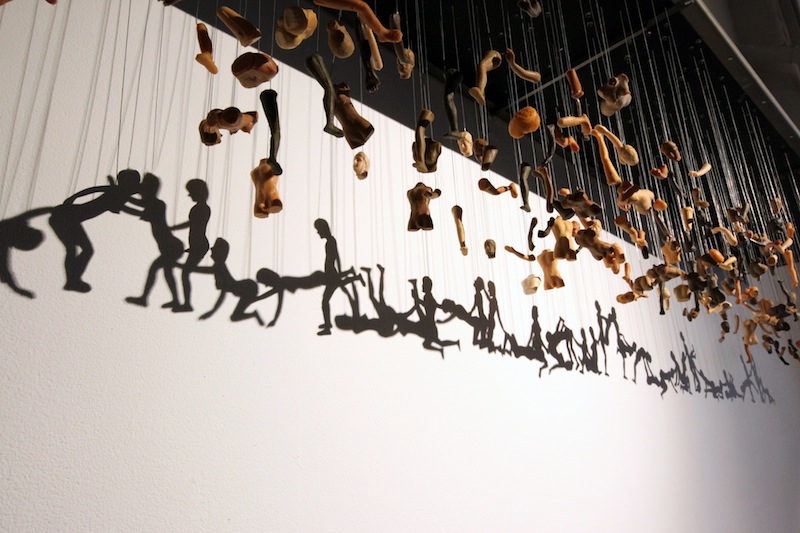 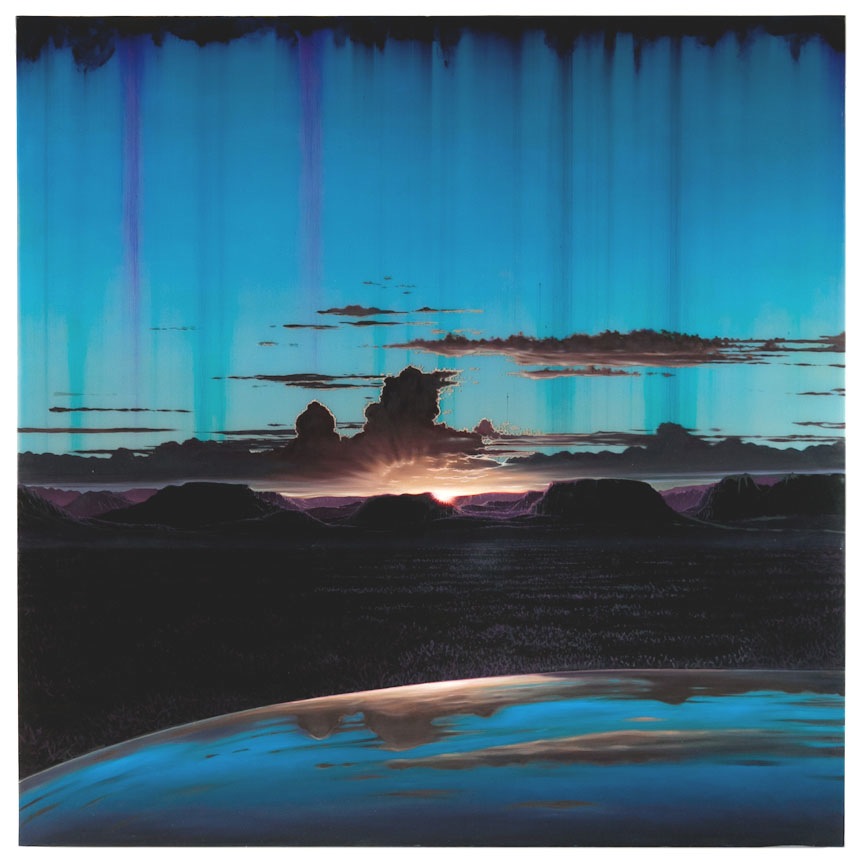 The Space Between the Stars is the third annual curated exhibition of upcoming international and London-based artists produced and curated by SCREAM .

The title subtly alludes to the the play of light and dark that the artists in this exhibition experiment with. Since the 1960s, artists such as Robert Irwin, James Turrell and Dan Flavin have addressed the phenomenological, spiritual and transient qualities of light by giving it physical form and creating an immersive experience for the viewer. Using hand-cut paper, phosphorescent acrylic, holographic paper, light installations and shadow-play, the artists in this exhibition investigate the possibilities of manipulating light as an artistic medium to create a profound experience for the viewer.

The work of Korean-born US based artist Bohyun Yoon investigates social environments and how systems of politics, mass media, technology and science can affect our fragile states of being. Yoon takes his observations from his diverse experiences of living in Korea, Japan and the US and uses the human body as a tool to explore these concepts and the idea of the public versus the private. In this exhibition Yoon presents Unity, an installation of silicon rubber figures suspended like puppets from a steel bar with a spotlight. The shadow-play cast from these truncated bodies create a dynamic and amusing outline that Yoon suggests is “a metaphor of the invisible power of political tricks in our society”. The silhouettes that appear on the wall are a chaotic and carnal scene of an orgy – an image that Yoon describes as “an illusionary fantasy where pleasure is also controlled by an invisible power”. Having shown extensively in Asia, Europe and the US, including the Smithsonian American Art Museum in Washington D.C and the Contemporary Art Museum in Houston; this is the first time Yoon’s work has been exhibited in the UK. Yoon is also a professor at the Virginia Commonwealth University in Richmond, Virginia.

Caroline Jane Harris (born 1987) transforms paper into unique kaleidoscopic marvels that encapsulate the inherent beauty of nature. Using digitally manipulated prints of trees as her starting point, Harris painstakingly hand-cuts the infinite gaps between the branches and leaves. She is fascinated by natural phenomena, and the geometric symmetries found in all levels of existence such as the bronchi of a lung, river networks and neuron activity. For this exhibition Harris has produced her most ambitious work to date, an epic landscape titled Sylvan Landscape over two metres in width. In this work Harris demonstrates her meticulous and labour-intensive skill and pushes the boundaries of what is possible with such a cheap and ubiquitous medium. The work consists of three layers of these lattice-like compositions placed with a small gap between each layer which create an intriguing weave of shadows that flicker throughout the landscape bringing it to life.

Chris Bracey has worked with neon and lights for over thirty years and has acquired a vast fan base including commissions from high-profile clients such as David LaChapelle and Vivienne Westwood. Bracey has also provided dramatic installations for films such as Kubrick’s ‘Eyes Wide Shut’, Burton’s ‘Charlie and the Chocolate Factory’ and the Batman films. Many of his works are self-produced neons, referencing popular culture and iconic imagery, from the streets of Soho, tattoo culture, evocative statements such as Is This Utopia, London Calling and Star and a lexicon of retro texts and references. Bracey also salvages old lights from fairgrounds, film props and vintage signs to re-work and re-generate them into contemporary pop sculptures that luminate and conjure a sense of wonder, nostalgia and glamour.

James Hopkins’ practice is concerned with the role of judgment in connection to the process of vision. He optically adapts the familiar in order to create sculptural interventions, which momentarily knock the viewer’s perception off-kilter. Hopkins’ sculptures often embody a perspective illusion, seen here with works such as Overhang, which hint at an epistemological uprooting that follows from the discovery that sight, our most relied-upon sense when looking at art, can be untrustworthy. The works seen in this exhibition are perspective text sculptures, which primarily play on the notion of fixing linguistic illusions through the fixing of the observers viewpoint. The artwork consists of letters, which have been sculpted in order to switch meaning when looked at in the reflection of a mirror. The mirror is an integral aspect of the artwork and often determines the choice of word in relation to the context of the reflection. Here we see Hopkins interpret the more metaphorical idea of light and dark, and explores the dichotomy of light and shadow, reality and illusion.

Cologne-based artist Regine Schumann creates sculptures and wall-reliefs using acrylic glass and a special phosphorescent pigment that allow the works to glow from within, whether in day light or UV light. The works have the minimal elegance of Donald Judd, and they radiate jewel- like colours. The artist is interested in creating ‘environments’ where the colour and light radiate and create a meditative and illuminating experience for the viewer, reminiscent of viewing a Rothko painting. Schumann in fact trained as a painter at the Hochschule für Bildende Künste in Brunswick and her approach to colour can be traced back to this early training. Schumann comments, “I have drawn on my experiences as a painter so as to influence the process of manufacturing the acrylic panes. When constructing the individual objects I frequently proceed in a painterly way, because it is solely the work of layering the transparent and translucid panes that determines the piece’s overall appearance.” Schumann’s works are stylish, seductive and illuminating. Schumann has taught at the Niederrhein University, Krefeld and has shown worldwide at gallery and museum level, including SMAK, Gent, Stadtmuseum, Oldenburg and Museum Ritter in Waldenbuch.

Since graduating from the Royal College of Art in 2006, Hsiao-chi Tsai (Taiwan) & Kimiya Yoshikawa (Japan) have worked collaboratively on large-scale projects and commissions. Tsai and Yoshikawa met in the Chelsea College of Art and Design in 2000. With Masters in Mixed- media textiles and Sculpture respectively, Tsai and Yoshikawa’s different creative histories richly combine in their joint practice to create an alchemy of colour and eccentric forms. Individually their practices draw many parallels; both artists are experts in bold use of colour, pattern, form and structure. The duo design and produce unique light sculptures and installations, which are futuristic, dynamic, and have intricate detail. For the hand-made works produced especially for this exhibition, Tsai & Yoshikawa have created vibrant and fantastic light sculptures that are suspended from the ceiling. With exotic flora as a primary influence, these artists use neoprene foam, perspex and an in-built light source to create hybrid ‘Pop blooms’ which allude to the cosmological and the botanical in a truly inventive and fantastical way. As the sculptures are lit from within, the colours and textures of the material radiate with vitality, and cast a tangle of shadows that bring these works to life. Tsai & Yoshikawa have gained several public commissions from Westminster, Hull and Manchester councils and an ambitious art installation for Harvey Nichols in 2007.

Brooklyn-based painter Shane McAdams uses ball-point pen, oil and resin to create his evocative and otherworldly landscapes. McAdams grew up with the desert southwest as a backdrop and was visually taken by its sculpted topography; how the layered strata of the rock formations came to be exposed by erosion from wind and water, and how the incremental and chaotic effects of time and climate could conspire to create something more orderly than something man-made. McAdams sees these landscapes and their geology as “reflecting the dueling relationships between the natural and the man-made, the temporal and spatial and the objective and the subjective”. By using mundane materials such as ball-point pen ink and Elmer’s glue, McAdams pushes the limits of these materials to create utopian and idealized images. In Synthetic Landscape 60 (Kayenta) McAdams’ skilled painting and draughtsmanship is evident; he seems to capture the ends of the earth, and dawn breaking on the horizon – perhaps a metaphor for the transience and impermanence of time. McAdams has shown extensively in the US and Scream presents his work in the UK for the first time. The fashion designer Matthew Williamson has used McAdams’ imagery for his Spring/Summer 2013 collection which was covered by Vogue and the New York Times. McAdams has also been mentioned in the Seattle Times, The Huffington Times, the New York Observer and The New York Times.

Sylvia Hommert was born in Los Angeles but resides on Shelter Island in New York. Hommert’s focus is on light and its reflections, how it interacts and influences environments. Hommert experiments with a range of mediums including pigment, beeswax, holographic paper and glitter on birch panels to capture this ephemeral and iridescent quality. The colours subtly shift as the natural light moves across the surface of the works. Hommert builds up layers of materials from the opaque to the translucent or transparent. She uses a flame to burn away certain areas to create depth and texture. Exposing these elements holds a certain mystery and creates intriguing textures and colours. The panels have a pristine resin finish which reflect the light and enhances the glittering and sparkly effect beneath. Hommert studied at the Otis Parsons School of Art in Los Angeles and has show extensively in the US and Europe. 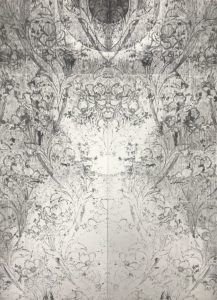 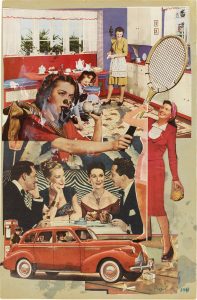 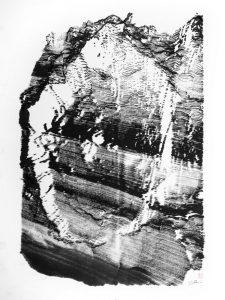 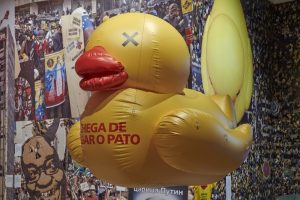