Through Edward Hopper's eyes: in search of an artist's seaside inspiration - FAD Magazine
Skip to content 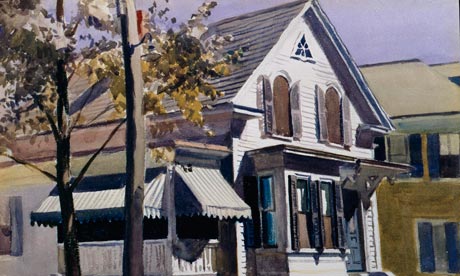 This article titled “Through Edward Hopper’s eyes: in search of an artist’s seaside inspiration” was written by Killian Fox, for The Observer on Saturday 11th August 2012 23.04 UTC

Gail Albert Halaban has identified 16 houses in Gloucester, Massachusetts, that were painted by Edward Hopper over several summers in the 1920s and she reckons there are a few more that have, as yet, escaped her notice. Over the past three years, Albert Halaban, a fine art photographer whose work has appeared in the New York Times and Time magazine, has been tracking down the Hopper houses in Gloucester, a picturesque city on the Atlantic coast, and photographing them from the same vantage points that the great American artist used to paint them from nearly a century ago.

Albert Halaban was not trying to imitate Hopper’s watercolours, nor was she the first to discover the houses – the subject of The Mansard Roof (1923), a large, elegant residence in the city’s Rocky Neck area, has had homage paid to it by Hopper enthusiasts for decades. Her interest has more personal motivations – her father grew up in Gloucester and she’s been spending summers there since childhood, so was intrigued to see how another artist had responded to the city. “It’s given me a fresh set of eyes on something I know very well.”

Hopper is a name that crops up regularly in relation to her work, particularly Out My Window, a series of photographs – soon to be a book – in which she portrays New Yorkers at home as viewed from neighbouring apartments. “People kept comparing me to Hopper and I wanted to know where that came from.”

She was also keen to make contact with the occupants of houses and find out how living in places of art-historical interest had affected them. “Some were aware of it; others had no idea. I called on one old man in his late 90s and he didn’t know his house had been in a Hopper painting. He was very excited because he had lived in another Hopper house in Gloucester as a child and that house had burnt down.”

At first, she was surprised by the differences between the Gloucester paintings and Hopper’s better-known later works. “When I think of Hopper I think of Nighthawks and all those New York paintings. His work is very moody, mysterious and lonely, but the Gloucester pictures are bright and sunny and much less dramatic.”

When she photographed the houses, however, she found subtle connections and similarities. “I tried to stand where Hopper stood, to make the composition the same, and was amazed that, for so many of the houses, he picked the least pretty perspective. In Houses of Squam Light, there’s this picturesque lighthouse just to the left of frame and he cropped it out. Gloucester is one of the most beautiful places I’ve ever been to, but he seems to have depicted the more hard-edged, working-class end of it. He turned his back on some of the prettiest places, which is what he did in his New York work.”

She was also intrigued to discover that Hopper, who is regarded as a realist and who painted the houses in Gloucester with great precision, manipulated one important aspect of what he saw. “He changed the light and shadows in his pictures a lot and combined different times of day so that the shadow might go in two directions – that’s how he created his narrative, his drama.” Albert Halaban responded to this by taking a more painterly approach to her photographs and manipulating the light as Hopper had done in the 1920s. “The houses that he painted remain, but the narratives he created only exist on his canvases. Standing in the same places, I was inspired to take my own liberties and create narratives that are my own.”

Out My Window is published by Random House