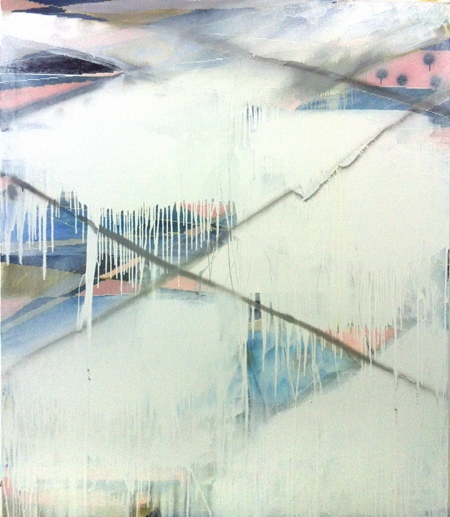 above, ‘Whiteone’ 177 x 211 cms 2012
18th May – 10th June 2012
Clare Price’s work what’s never certain is which of two opposing forces will win: composition or decomposition. In these new paintings an underlay of carefully traced, yet primitive, simulated pixellation (taken from out-moded computer programmes) reinforces a firm structure, an armature almost, that alludes (maybe – it’s only an allusion) to a mapped-out landscape. The protagonists square up for battle – in the foreground, a layering of pentimenti, rough brushstrokes and the signs of an occasional flung paint-pot do their best to deflect easy assumptions, as an overload of drips and forced error rescues gesture from the apparently cold ‘process’ of the computer-generated patterning. The punk dayglo of her previous work almost abandoned, Price has developed an ever more refined palette until we’re taken by surprise that what’s dominating now is gesture. These pixel paintings of course begin to resemble the (very) real thing.

A game of strategy, facing up to the vagaries of chance.
www.studio1-1.co.uk 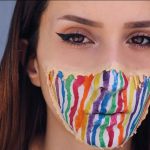 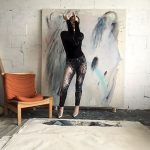 Clare Price: painting, performance and the self

The actions of Clare Price are visible in her series of rapidly-made paintings ‘Fragility spills’. The works are scaled to the artists body 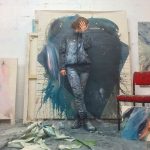 That means I must have visited 5,000 painting-based shows this century. Yet there are approaches in the gesturally-themed group show ‘Control to Collapse’ which I can’t recall seeing in any of them..