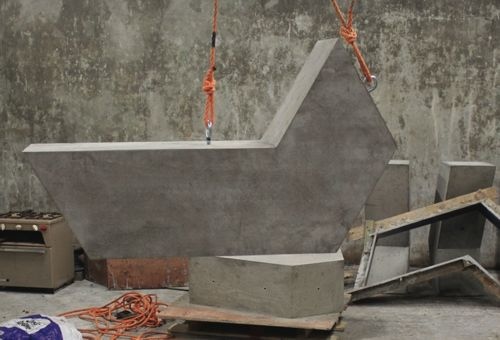 An exhibition of new work by Matt Calderwood
The exhibition will present a single monolithic concrete sculpture made up of six identical, individually hand-cast concrete components, assembled in situ. This work will stand around 2.5 metres tall and weigh 1 and a half tons.

Previous sculptures by Calderwood relied on an added element (water barrels, sandbags) for stability. This balancing act, combined with cheap, everyday materials such as plaster-board, made overt reference to impermanence and fragility.

The new sculpture in “Concrete” supports itself — it is a self- sufficient closed-loop system, held in equilibrium but with clear paths of contradicting and counterbalancing forces within. Each of the 6 elements needs to play its role to make the sculpture possible. They are mutually dependent on each other to make a united sculptural form.

Calderwood is aware of the fragility and decay inherent to the assem- bly and reassembly of the pieces. Moving these heavy elements is a fraught process. The aim is always to attain perfection while bearing the humility of its impossibility. This is the burden the new work in- ternalizes – the knowledge of its own fallibility.

In contrast to the grandstanding bravado of the Modernist project, this concrete behemoth is aware of the inevitability of its decline. One lives trying to protect one’s body from harm, then learns to love scars when they occur.

Calderwood speaks about the delicacy of these concrete lumps, about the fragility of the edges, the responsibility that creating and moving them brings. Like any system, the individual components have to be cared for to make a balanced whole. It is a hard-won equilibrium that must be cared for to sustain.