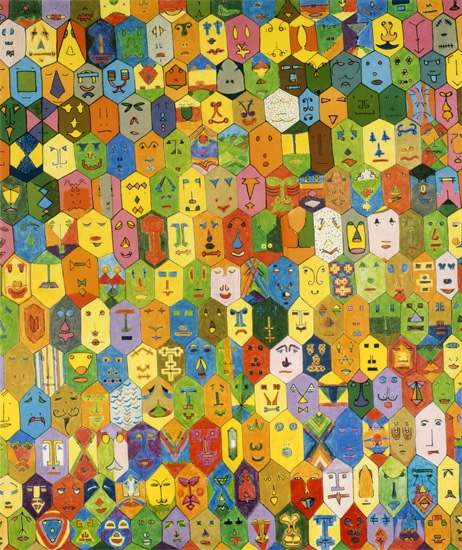 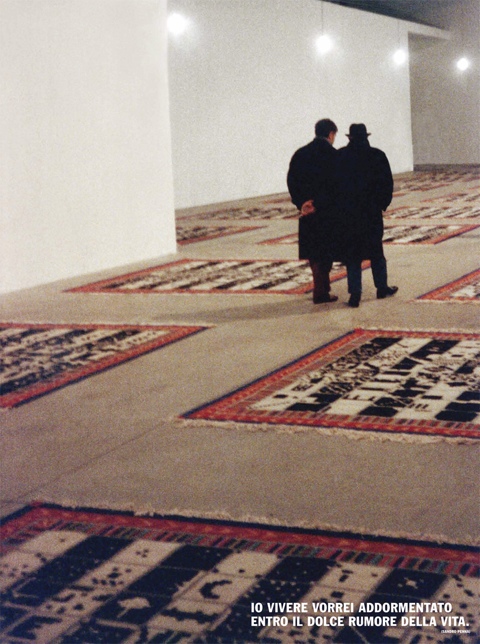 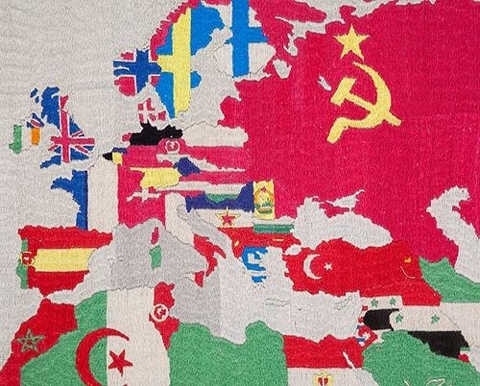 FEBRUARY 28th – MARCH 31st 2012
Sprüth Magers is delighted to pay tribute to the Italian artist Alighiero Boetti (1940 – 1994), in this exhibition at the London gallery. The show will coincide with the artist’s first major U.K retrospective in over a decade at Tate Modern, from 28th February – 27th May 2012.

Initially associated with Arte Povera, Boetti first came to prominence in Turin in the early 1960’s. In 1969 the artist distanced himself from the movement, employing a more idiosyncratic approach and a greater array of techniques and media; from printing, performance and sculpture, to embroidery, drawing, construction and mathematics. His work reveals a fascination with chance, order and notions of authorship. A passionate believer in the importance of collaborating with others, both artists and non-artists, Boetti incorporated many aspects of culture in to his practice, in particular the non-western traditions and skills he encountered during his travels in Asia, Africa and the Middle East. This diverse and democratic approach blurred the boundaries between art and craft, and art and life.

The gallery has worked with the artist for over 20 years, first presenting a solo show in Cologne in 1991. Realised in collaboration with Pasquale Leccese, this exhibition will take over three floors of the London gallery. On the ground floor, the gallery will present Ononimo, 1974, a large drawing in ballpoint pen, and Dossier Postale, 1969-70, a major work rarely shown in its entirety. Dossier Postale consists of a series of letters which were sent to well-known recipients, primarily artists, art critics, dealers and collectors active at the time. Boetti sent the envelopes to imaginary addresses, thus each letter was returned to the artist undelivered, demonstrating Boetti’s preoccupation with improbability and chance. Also displayed on the ground floor will be L’insensata corsa della vita, 1989, from the artist’s series of Mappas, embroidered by local artisans in Afghanistan. The colourful tapestry features a world map in which each country is represented by it’s national flag, a comment on the changing geopolitical situation of the time. The suggestive title, meaning ‘the nonsensical course of life’, is written in reverse.

The lower level gallery pays homage to ‘Il Muro,’ the wall in Boetti’s country home in Todi with its floor to ceiling hang of cards, photographs, drawings and found objects revealing the diversity of the artist’s thoughts, inspiration and curiosity in the world. The same room features Kabul Roma Roma Kabul, 2010, a 12 minute film produced by Traslochi Emotivi, an independent production company. The film includes an interview with Salman Ali, an Afghan refugee who met Boetti in Kabul while working as a waiter in the artist’s hotel and art project One Hotel, 1971-1979. Ali recounts his life as Boetti’s devoted assistant and friend, shedding light on the creative processes and day to day activities of the artist. Similarly underlining Boetti’s artistic legacy and influence will be a book created by the artist’s friends and assistants, Unpublished Materials, 2011 edited by Amedeo Martegani and Luca Pancrazzi. The publication contains pages of correspondence, memories, ideas and projects, some unfinished or never realised, from the beginnings of his artistic career in Turin, to his travels in Africa and Asia. The exhibition will also include the portfolio Insicuro Noncurante (1966-75). Pieced together by Rinaldo Rossi, the edition consists of 80 reproductions and provides a retrospective of Boetti’s work.