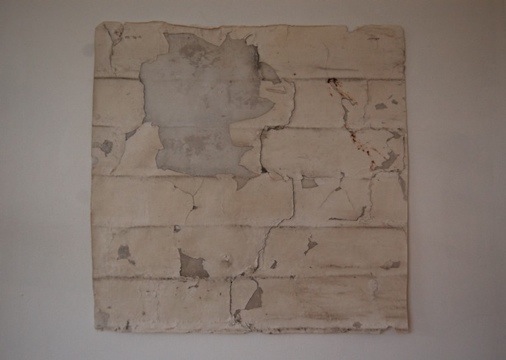 Living in a city, you often catch glimpses of leftover layers of signage and architectural marks. These palimpsests are like ghost shadows: pieces of time left hanging.
ANNE HARILD’s stop frame animation, Looking Glass, uses window frames discarded in Hackney Wick to reflect an entirely different architectural space: the Victorian church in which she was working. Collaborating with composer Edmund Finnis, Harild has choreographed a six minute sculpting of sound, light and shadows. She describes it as a performance in which it is the space that performs.

ROSE O’GALLIVAN’s work pivots on the idea that the mute can be presented. Contradicting the presumption that a work has a message or needs to inform, O’Gallivan is more interested in absence creating a presence. Leftover traces, that can be as minimal as the mark left in a piece of folded material, become part of print/paper/fabric/sculptural installations. She has created new work for this show, responding to the gallery space and to the jewellery traditions of the Hatton Garden area.

MAYA RAMSAY works with buildings due to be demolished or renovated. She is currently working at Bletchley Park in the huts used by the code-breakers. Ramsay has developed a process of lifting pigment, debris and the texture of surfaces to create a kind of epidermis. These are presented, like paintings, on the wall but they are simultaneously archaeological documents. Their titles, which refer to military conflicts and death tolls, suggest a political undertow in Ramsay’s presentation of rejected, left-behind strata.

Anne Harild is a Danish artist who lives and works in London. She graduated from the RCA in 2009 and was awarded a residency to work for a year at the Florence Trust Studios. She is presently working on ONSITE, the MAP(Music, Art & Performance) project responding to the space and architecture of the Barbican’s Exhibition Hall.

Rose O’Gallivan graduated in Printmaking at the RCA in 2011. She has exhibited at CG Projects, T1+2, London, The Exchange, Penzance and Parfitt Gallery, Croydon.
Maya Ramsay completed an MA at Central St Martin’s and was selected as ‘MA Star’ by Axis; she was awarded the Axis Florence Trust Residency 2010 – 2011. 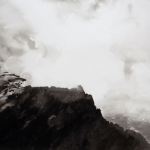 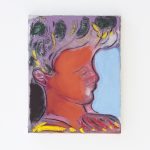