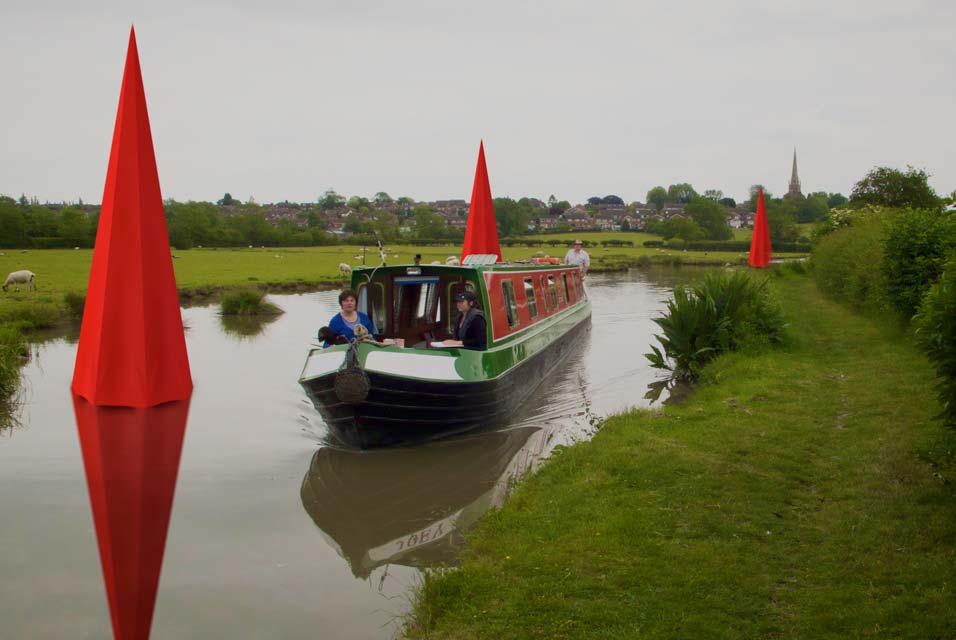 Image:Steve Messam’s “Nene Nine”.
Northamptonshire, will this summer welcome new exciting art commissions and large scale artworks onto its waterways and water towers as part of the Cultural Olympiad.

The installations within this programme, titled FLOW, will take place across several key locations in the county, from the Grand Union and Oxford Canals, which connect London to Birmingham and Oxford to Coventry respectively, to the gentle River Nene, now celebrating its 250th year of being navigable.

Featured artworks will range from ‘Nene Nine,’ a series of nine magnificent spires by internationally renowned artist Steve Messam, running along sections of the Grand Union Canal and the River Nene, to Jo Fairfax’s mesmerising water tower light works. Sited in some of Northamptonshire’s most beautiful and unexpected locations, FLOW aims to raise the profile of this ancient county and inspire all those who witness these extraordinary artworks.

FLOW is an inspiring and ambitious project which aims to draw broad attention to the prevalence and vital importance of Northamptonshire’s waterways. Northamptonshire, the county of ‘spires and squires’, a landlocked county in the East Midlands, can be reached within an hour from both London and Birmingham, and in around two hours from Liverpool or Manchester, making these exciting artworks and events easily accessible for visitors from many of England’s largest cities.

Inspired by London 2012, FLOW is the flagship event within this year’s Igniting Ambition Festival, which runs from April to October this year.

Steve Messam: Nene Nine
Echoing Northamptonshire county’s renown for spire architecture, artist Steve Messam will create a series of spire forms, to be located in a mile-long trail on England’s most picturesque waterways: in August on the Oxford Canal, and in September on the River Nene outside the historic market town of Oundle. The spires will create new vistas down the canal and river, working with the shapes and textures of the surrounding landscape. The materials used to create these structures will reflect both the traditions of narrow boat building and the county’s long-standing connection with leather.

Jo Fairfax: Towering Light
Using a combination of LED lighting, digital film projection and high powered lasers, Jo Fairfax will create an installation to illuminate and animate Northamptonshire’s iconic Water Towers. The work will also pay homage to an arcane national landmark located within the county. The precise location is to be announced later this year, however the installation will be clearly visible to residents in local towns and villages, as well as road and rail users.

Charles Monkhouse: Sywell Echo
The Sywell Reservoir was constructed in the early twentieth century to provide water for the Rusden and Higham Ferrers communities in Northamptonshire. Its construction, which entailed drowning an old mill, was controversial, as was its demise as a reservoir in 1979. Local communities vigorously campaigned to prevent its demise, leading to Northamptonshire Country Council adopting it as the centrepiece of the Sywell County Park. Beneath the reservoir the beds of the old streams still define the confluence of three parishes. Sywell Echo explores the history of the valley by redrawing its hidden geography with 160 LEDs floating above the reservoir’s surface. Each light, precisely the height above the water that the stream is below, will recreate, within its watery reflection, the old waterways and boundaries below.

Will you ring Creed’s bell to mark the start of the Olympics?
Lorenzo Belenguer Art Opening at Nellie Dean Tuesday 24th July
Ring Your Bell and Join Thousands Of People to Help Create the UK’s Biggest London 2012 Celebration Any Bell. Anyone. Anywhere.
South London Art Map Magazine Issue 14: Out Now!