Sharing a graceful, and somewhat experimental approach to their practice – where an irreverent humour, sense of performance, and enjoyment of colour are connecting threads, Peacock Trousers will feature 4-5 new large-scale sculptures by Gabriel Hartley, as well as an installation, film, and edition of photographs by Appau Junior Boakye-Yiadom.

RANIA MATAR | A Girl and her Room | The Mosaic Rooms Rania Mater, an Arab-American photographer brings the award-winning series of images ‘A Girl and her Room’ to the UK for the first time. These intimate photographic portraits are of teenage girls in their most personal space, their bedroom. Matar took as her subjects teenage girls from the two worlds she experienced herself, the Middle East and the United States, and was fascinated by how, across both worlds, teenage girls were acutely aware of each other in groups, affecting how they portrayed themselves and acted.

‘In my images I hope to portray the chasm between childhood and adulthood and the young women straddling it, sometimes as rebels, sometimes as young ladies aware of their newfound sexuality and very often still as children.’

This exhibition explores the complex entanglement of art and politics, as perceived by interdisciplinary artist Sasha Huber. Through camera and video lens, Huber focusses her documentary pursuit on the origin of racist assumptions and the influence of racist representations in culture, society and political structures.

Growing out of an international exhibition called “Parallax”, conceived and curated by art historian and theorist Dr Chris Barlow, this art show aims to distinguish itself from other artists’ fairs by emulating a specialised exhibition. Parallax AF wants you to approach it as a serious platform where international and national artists present their work to national and international dealers, art industry people, collectors, critics and buyers, without commission charges. This also provides artists with the benefit, if they wish, to present non-commercial work, or to try out new commercial ideas, without high overhead risks often associated with other fairs.

Parallax AF is also smaller and intimate than other fairs, and held in a professional gallery space in central London. The shows are curated by a professional guest curator, having the feel of an organised exhibition, and catalogue essays are written by specialists.

‘CONSIGNMENT @ STUDIO75’ is a selection from an ongoing project of painting, print and film on the theme of human trafficking and extraordinary rendition. Boxed, labelled, despatched. Units in batches; humanity as mere commodity

To retain an urgency and freshness about the exhibition, the pieces will be rotated by 90 and 180 degrees at the start of each day, the exhibition re-inventing itself visually throughout the run.

A short film replicates and documents this composition and accompanies the paintings.

From Alternative Knowledge to Counter – Memories

How do we inhabit an image? How can alternative knowledge and counter-memories be generated through the displacement, misplacement or condensation of collected imagery? The works in the exhibition explore the recreation and transposition of narrative structures, applied to systems of representation, image production and dissemination. The separation of roles between authors, actors, protagonists and observers in the images’ treatment, or manipulation, leave them as unanswered enigmas in which meaning is to be reinvented through the viewer’s active participation. The exhibition is a project by Vincent Honor. The works and installations have been especially produced for the exhibition.

Curator Nicolas Deshayes has created a dynamic space in the group show Rain. The exhibition explores the material slippage between public and intimate experiences of collective space, most overtly through Deshayes dispersion of the works in the gallery space with a stylized hang that is reminiscent of precipitation. This hanging is at once capturing something of the essence of precipitation but also gestures towards the inscrutable nature of technology, with its fragmented surface and excess. The works are made primarily from what Deshayes calls ‘public’ materials – ephemera of the everyday – such as glass, plastic and aluminium.

RAIN becomes an environment that is made up of repeated sequences of ubiquitous imagery and familiar surfaces played out in an ambiguous game of cause and effect; from hard edge materiality, to pools of water and their muddy fusion. 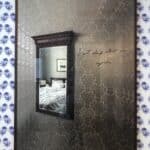 Mahmoud Khaled, Fantasies on a Found Phone, Dedicated to the Man Who Lost it

iPhones have pretty good cameras. More than just rendering a subject in high-resolution, they can endow a sense of affective […]