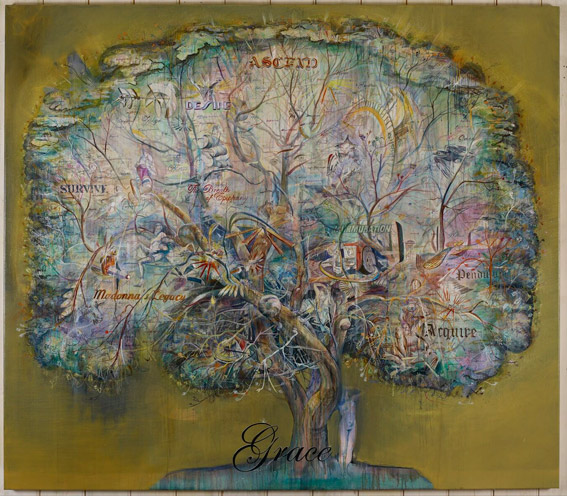 If you weren’t an artist, what else would you be?
I fancied a crack at Medicine, a surgeon.

Anytime, any place – which artist’s body would you most like to inhabit?
Basquiat for his system of depiction and the NYC boom time 80s scene.
Bacon, for the compositional velocity and capacity for liquor.
El Greco, for the long linkage and Velazquez for slight of hand.

What is your favourite ‘ism’?
Impossible to answer, each has their merits and shortfalls and they’re products of their time.

What was the most intelligent thing that someone said or wrote about your work?
Er, I’m not sure, it went over my head.

And the dumbest?
“… Can you make me one in green?”

The work in Headland explores myths, what is it about these ancient stories which resonates with you?
It’s not so much the original myths per se but the idea of myths, what they evoke and how we’ve incorporated them into our identities and thoughts. They have the capacity to haunt and inspire, transcend time and boundaries. They’re magic, what’s not to like?

Do you think there are modern day equivalents of these mythic stories?
…That depends how far you are willing to stretch the term “equivalent”… but yes, I do.

You incorporate text into your works – what role is this playing and how do you want your audience to respond to it?
The paintings deal with thought, the process of thinking, recalling and reacting so using words and images seems a natural way to evoke this. The act of reading encourages the viewer to participate, as the brain naturally wants to find connections between text and image. I like the notion that a painting can in some way act like a mirror to the viewer.

You seem to be dealing with grand meta-narratives and borrowed symbols like the tree of life, in Headland, in light of this, how personal is your work?
The symbols are loosely based on art historical symbolism, paganism and heraldry but I have also been adding my own to stand for wider ideas that have more relevance to today. Their meaning is not “fixed” but conational- (i.e. plane: power, order, control, flight, penis). In this way they’re to be interpreted with poetic licence. Some of the imagery is the pictorial depiction of a verbal metaphor or expression i.e. car crash, vulture, spade, sinking ship, pipe dream, leap of faith. I suppose the impetus to make and the system I choose to render in is personal, but the neither the content or subject is overtly so.

Like in Terminus you’re returning to ideas regarding man’s obsession with personal geographies, self-improvement and codes of conduct, is this obsession a good or bad thing? What role does it play?
It’s immaterial whether it is good or bad, it happens: humans by nature tend to “aspire” and “judge”.  It’s an interesting angle to make work from as it deals with the non-literal and ideas around evaluation, comparison, point and purpose. From a viewers perspective it places “you” in the frame.

What are the “codes of conduct” you live by?
I try to do as I would be done by especially when sober, but I’m no saint.

Which artists would you most like to rip off, sorry, I mean appropriate as a critique of originality and authorship?
Come on, it’s 2011!

Do you care what your art costs? State your reasons!
Yes, too low and you’re left feeling robbed, too high and you’ve shot yourself in the foot…

Are you a political artist?
I don’t believe it’s the role of the artist (or curator) to be prescriptive about interpretation. The viewer activates the content. Look, choose and make of it what you will.

How do you start the process of making work?
I start with a word, draw a map of its associations then collect images that relate to this list. I plunder books, newspapers, magazine and search engines using terms like mechanical and industrial, Warfare, Luxury or Decay, Function and Malfunction. The kinds of images I choose are particular. They have to be expansive in their associations so as not to shut the syntax down prematurely. I particularly like images that contain the possibility to infer a number of readings at the same time.

What is your favourite cheese?
Danish Blue when down at heel -rich, strong, mildly astringent yet cheap as chips. If feeling flush, Gorgonzola. I love that full fat finger-licking grandiosity.

What’s next for you?
Who knows!

Exciting time for drawing – in conversation with Graham Fink