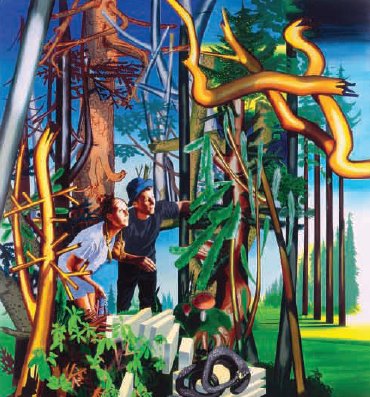 Opening on 17th February 2011, the exhibition will feature new work including paintings of landscapes and unsettling domestic interiors.
Having studied at the renowned Hochschule für Grafik und Buchkunst (Academy of Visual Arts) in Leipzig where she received classical training in painting and drawing, Kühn moved to the US shortly after her graduation. She completed postgraduate studies at the School of Visual Arts and Hunter College in New York followed by a Radcliffe
Fellowship at Harvard University. Her experience of living in America coupled with her academic background from Leipzig makes Kühn’s paintings unique and different from her colleagues from Germany.

Kühn’s work offers painterly and formal connections between figures, landscape, and architecture through a vocabulary that is emblazed with light and informed by European, Northern American, Asian art and history. Her drawings and paintings suggest fanciful worlds, private and closed in many ways yet broadly resonant and open to a range of interpretations.The show will feature a sequence of paintings depicting domestic interiors and landscapes which are on the threshold of nature
and urbanism. These series of works – Garden Eden (2010), The Flood (2010), The Couple (2011), Portrait of a young man (2009) – illustrate Kühn’s exploration of borders, thresholds and intersections challenging traditional perceptions of painting while adding a peculiar quality of compositional movement and of animation.

A signature characteristic of Kühn’s work is the investigation of Northern Romantic tradition through the influences of sources like The Hudson River School or the photographs by Ansel Adams. At a glance her works resemble the paintings of Caspar David Friedrich, in Black + White Landscape on Wall (2010) and Mountains on photo (2010), Kühn composes a towering landscape of cypress trees, pines, andwillows in woods, altering the Romantic atmosphere with a vaguely ominous contemporary insinuation.

Haunch of Venison Gallery to Close !