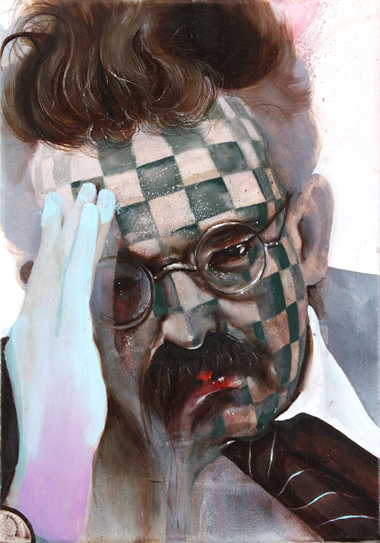 Image:Gavin Nolan Why Kill Time When You Can Kill Yourself

October 13th – 17th
Nika Neelova, The Night Also Falls, burnt charcoal and rope, 2010 The fourth edition of Ellis and Rumley’s hotly anticipated annual survey of contemporary art with a dystopian edge Simon Rumley and Zavier Ellis, curators extraordinaire with a taste for the Goth and grotesque, are proud to announce the fourth edition of The Future Can Wait. Taking place this year at the new location of Shoreditch Town Hall, the museum-scale exhibition showcases artists who all have in common a dystopian slant and London as the city where they either live or were trained.

One of the very few satellite events remaining in London during Frieze Art Fair week, The Future Can Wait returns with a disturbing selection of works, encompassing performance, video, site specific installation and painting, sharing an un-pretty aesthetic and organised with a specific curatorial taste for the grotesque and the sinister.

There are 30 artists in this year’s line-up, including The Future Can Wait stalwarts Tessa Farmer, Sam and Luke Jackson, Gavin Nolan and John Stark, as well as newcomers Dale Adcock, James Howard, Jasper Joffe, Nika Neelova and Wendy Mayer.

If you want to know what’s really happening in the London art scene, don’t go to Saatchi, go to this. There’s a new generation of avant-garde artists at work in London – nothing to do with the YBA years, everything to do with what’s going to happen in the second decade of the 21st century. These young artists are excited about each other – always the first sign of a big change in art. You should be excited about them too. This show will be a blast, not a breath, of fresh air in an art world that badly needs just this. Edward Lucie-Smith
Ellis and Rumley have proved adept at picking up and nurturing collectible new talent, and providing a platform to emerging and mid-career artists during London’s busiest art week, and beyond. Their artists, dubbed the New London School because of their London and aesthetic affiliations, are rapidly gaining currency in international circles and have a loyal following of gallerists, curators and collectors from Berlin to Hong Kong via Los Angeles.

As the owner of gallery CHARLIE SMITH london, Ellis regularly collaborates with overseas galleries on exhibitions of New London School artists, while film-maker Rumley has worked with Gavin Nolan and Sam Jackson amongst others on visuals for the horror films he directs and produces.

The Future Can Wait was originally conceived as East London’s alternative to Frieze, and the exhibition has stood the test of time as one of the few satellite art events still going following last year’s economic turmoil. With this year’s installation in the dark and gloomy interiors of the basement of Shoreditch Town Hall, the venue, as always, stands in sharp contrast to the glossy bright interiors of the traditional art fair.