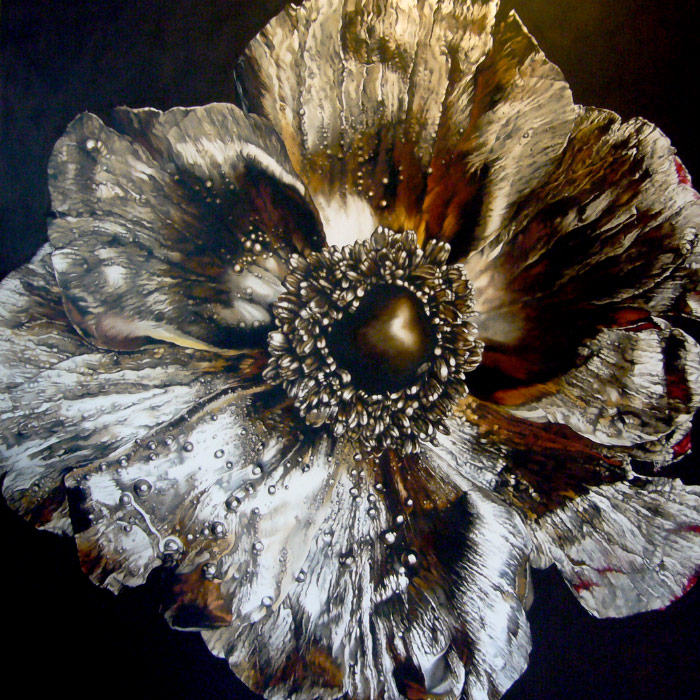 Art Work Space is proud to present ‘Dreamland’, an exhibition of new work by British painter Heather James. Made up of a series of large-scale oil paintings, the exhibition sees the artist continue to focus on her chosen subject of flowers. Inspired by traditional still life and its original themes, she contemporizes and personalizes them by drawing on her own experiences and observations.

James began an exploration of these themes whilst at college, where she found herself updating or inverting the Dutch Still Life and Northern Renaissance visual symbolic language. Similarly to the ubiquitous skull that is so often found in, generally masculine, contemporary art – and which is directly drawn from this earlier period – flowers provided the artist with a suitably feminine symbol through which to continue to explore these. Painted in the photo-realistic style, the works move beyond exact representations of individual blooms and become examinations of love and lost love, life and decay, beauty, youth and age.

Of the work James says, “I have been working almost exclusively with flower imagery, drawing on the dark significance of their art historical symbolic meanings, to explore issues relating to and arising from contemporary culture. The feminine associations and connotations of the imagery are relevant to me with the current problematic attitude towards beauty and how that mutates our attitude towards love and loving in the modern day, consumerist society and celebrity obsessed culture.

James’ work also suggests a preoccupation with a visual uncertainty, the questioning of what is real and true, “In struggling with these issues my paintings become an exercise in the nature of mimesis, an exploration of symbolic materiality, a depiction of surface as insecure, changing, ageing, altered, manipulated, and to varying degrees artificial.”.

Although widely exhibited throughout the UK, both alone and in group shows, ‘Dreamland’ at Art Work Space is James’ first solo show in London since she graduated from Saint Martin’s in 2006 and is sure to see her recognized as one of Britain’s most talented emerging artists.