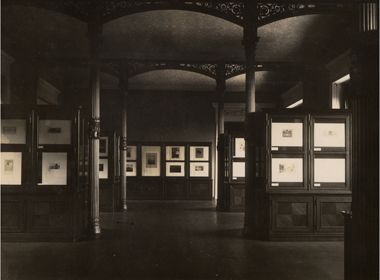 © bpk / Zentralarchiv, SMB
Kupferstichkabinett: Between Thought and Action. Looking at the pivotal role of drawing in current practice, the exhibition features almost 200 works on paper by some of the most significant artists working today.

The German term ‘Kupferstichkabinett’ describes the special collection of prints and drawings within a museum, ‘kabinett’ originally deriving from the small space within a castle where personal collections were kept by the wealthy and aristocratic. These regal compilations of art on paper were generally encyclopaedic in scope and served as the precursors to public museum collections.

As a medium, drawing covers a range of attitudes in art, from the immediate, intimate and subjective to investigative, analytical and narrative. Joseph Beuys described it as ‘a thinking medium’, both as a catalyst for processing thought, and as work in its own right. This selection of drawings and prints traces a range of subjects, including: ‘Ideas Generation’, where artists use the immediacy of drawing as a means to prepare and refine a concept; ‘Systems, Architectonics and Abstraction’, in which predetermined rules, structures and methods govern the form of the image; ‘Expressions of Anatomy’, where intimate portrayals of the figure assume a central position; ‘Graphic Narratives / Surreal Legacies’, featuring imagery from the fantastically bizarre to the comically illustrative; and ‘Historia’, which examines how drawing has been used to question the role of photography in the mediation and construction of historical memory.