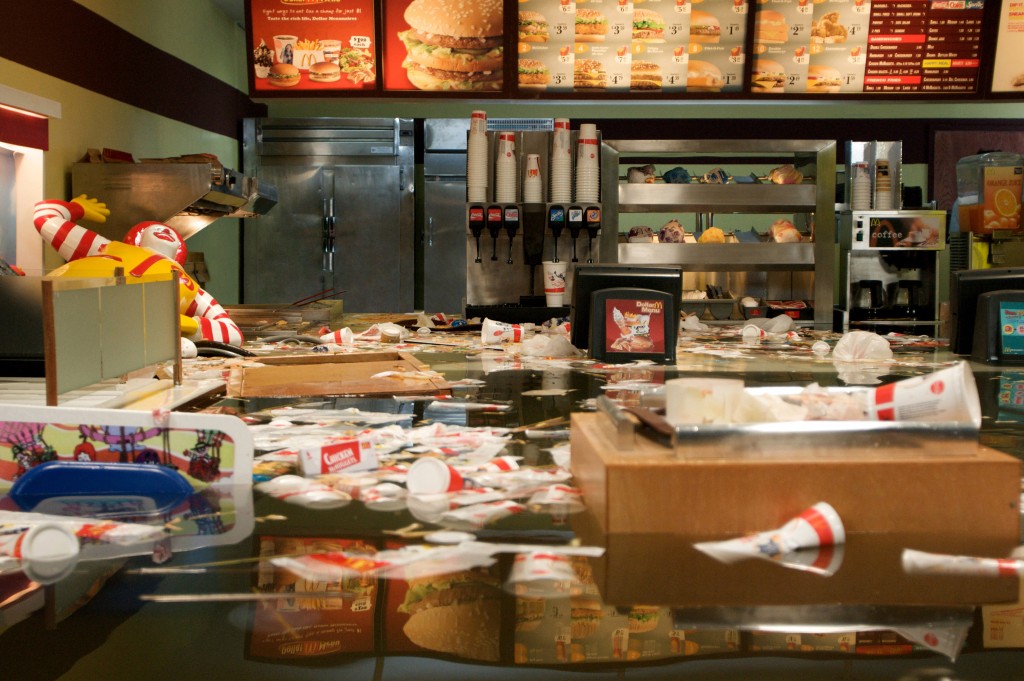 Image:SUPERFLEX | Flooded McDonald’s, 2009 Film (RED 16:9) | Courtesy: Peter Blum / Nils StaerkI
www.artbasel.com
Basel is a great cultural/artistic destination all year round. The advantage of visiting Basel outside the art fair week is that accomodation would be much easier to obtain. Cheap flights can be obtained via easyjet www.easyjet.com and accomodation via www.travelpoint.com or by googling cheap basel accomodation

During the Basel Art Fair week there is always a tremendous concentration of top quality contemporary art shows on in the Basel museums and galleries.This year there is no exception see www.museenbasel.ch

Their current exhibition is a world class exhibition of arguably the greatest black artist ever – Jean Michel Basquiat [1960-1988] The NewYork artist started out as a graffiti street artist named Samo and one time boyfriend to Madonna. He went on to produce an amazing output of jazz- like improvisational drawings and paintings which were both wild and ingeniously sophisticated and inventive, a visual speaking in tongues [and very fast]. He would paint on all manner of objects including fridges.He famously collaborated with Andy Warhol on a series of paintings which were hard to sell at the time .Like many a black jazz musician before him he died from heroin abuse. This will be great location to see his work . The show ends 5 Sept
Also with a solo show is the Cuban New York artist Felix Gonzales-Torres [1957 -1996] a ground breaking conceptual installation and minimalist artist – who famously gave away his art free and still does so posthumously [ I have 11 of his works which I collected free over the last 15 years]. He created a variety of printed paper stacks which the viewer could take away an example from. The imagery ranging from text pieces ,monochrome sheets , to images of the sea and sky and Americans who had later been shot- the artist died from aids related illness. Grief and loss became part of his subject matter in his billboard images of an empty bed witnessing the death of his partner also from aids. His current show Specific Objects without Specific Form runs to 29 august .

Their current shows are Rosemary Trockel drawings [ born 1952 ] German artist whose work has powerfully and wittily made us question the value of the macho in art and life . She makes provocative politically challenging work using traditionally feminine biased material like knitwear to challenge prevalent prejudices and conceits – it will be cool to see her drawings which I am unfamiliar with.
Also man of the world Mexican conceptual installation artist Gabriel Orozco [ born 1952 ] Whose image of a thinned down Citroen car has become an undriveable classic art icon – Both shows run to September after which the museum will be holding an Andy Warhol show which will be worth the plane fare for that alone

At the contemporary art annexe to the Kunstmuseum – Museum fur Gegenwartskunst there is an exhibition of the polymath conceptual artist filmmaker, painter and musician Rodney Graham [16-1-49] Canadian born artist who is a great narrative inventor of personas which can literally turn the world on its head – witness his upside down tree photos – this museum is a wonderful place within a stones throw of the Rhine

Next to the Rhine also is the Museum Tinguely which commemorates the Swiss artist Tinguely [1925-1991] who created mechanistic kinetic sculptural works and his wife Nikki de Saint Phalle [1930 – 2002] manic creator of coloured sculptural phantasmagloric The works and changing exhibitions are housed in a massive architect designed museum which would be the apple of any artist’s eye in terms of the ideal showing space.

The art museum and educational centre Scaulager has a staggeringly brilliant collection of contemporary art of the highest quality – Their latest show features USA art star Matthew Barney[25-3-67] and is entitled- Prayer Sheet With the Wound And The Nail – The show references his drawing restraint series – Barney’s mark making under severe performative duress is presented in sculpture , video and drawings – I was very impressed with his recent show at Sadie Coles gallery – his drawings[ in a Beuysian style] continue to improve and develop. The show runs until October.

One of the worlds greatest design museums is the Vitra Design Museum a short bus journey away from Basel across the border in Germany features architectural building designs by Frank Gehry , Zaha Hadid ,Ando ,Grimshaw ,Herzog and De Meuron as well as a design museum designed by Gehry with changing exhibitions .A place of pilgrimage for lovers of design and architecture [ it has a very good shop too ]

VOLTA 6 which features galleries presenting emerging and cutting edge art –
from London featured galleries I know and admire include- Danielle Arnaud gallery , Fred , Riflemaker , Nettie Horn and David Risley so I shall be visiting this for sure and will report back

LISTE ” the young art fair ” show galleries less than 5 years old and artists under 40 London based galleries that are showing here are Ancient and Modern , Hotel , Carl Freedman ,Limoncello , Herald street , Jonathan Viner all galleries that put on challenging and interesting work so I look forward to reporting on this fair also.

SCOPE I shall have a very quick look in here

The most exciting and innovative part of Basel Art Fair for me is the ART UNLIMITED art projects space .
This is the space at Art Basel where it may be possible to experience the shock of the new or to experience the occasional wow factor of the something strange and compelling . 60 Large scale sculpture and installations ,performances , video projections unassociated with the commercial art market can bear fruit in the imagination or at least threaten to . Maybe it is even possible to be shocked or scared . Anyhow this is the place a self-confessed art junky like myself is most likely to get an art-excitement fix. This is the area of artistic combat that makes Art Basel a winner in the artfair gladiatorial ratings

With famous names abounding in the line- up In the commercial areas of Basel Art fair the expected big named galleries appear
The Gagosian ,WhiteCube ,Lisson ,Victoria Miro , Hauser and Wirth , Spruth Magers , Simon Lee , Annely Juda , Frith Street , The Approach, Sadie Coles, Stephen Friedman, Greengrassi , Bernard Jacobson , Stuart Shave Modern Art, Anthony Reynolds , Timothy Taylor , Waddingtons all galleries known and loved in London that are all capable of shinning forth with art surprises and unexpected treats and roads least travelled. I shall be peering forth at these and will communicate my findings and also hope to find surprises within the famed and famous and not so famous