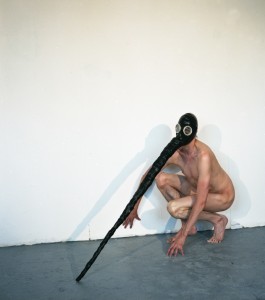 The exhibition The Mosquito man & Other Stories opens on the 1st of December, 2009 at Galleri Skylten. This is Roberto Ekholm’s first exhibition in Sweden.

Roberto explores myth and identities through his practice, which encompasses sculpture, photography and drawing. In what he calls “performative photographs” fictitious and factual narrative are explored, and he allows the body to be the focus as it metamorphoses into these various roles.

The starting point for this body of work comes from a particular moment in medical history. During an AIDS conference held in 1991, a question was proposed to the panel, “Do mosquitoes transmit the virus?”  The presenter answered no and followed his response with,  “You ask why, you can ask why forever”.  This sentence became the inspiration for the work and crystallizes an oscillation between fear and trust.  It’s in this context that image of the mosquito is both one of terror and fetishized desires of the ‘body’ through multiple sexual identities.

Roberto often forms the basis for these characters by using information found in resourced text from newspapers, online sources and medical journals, as well as stories taken from dialogues he has participated in or overheard. These characters take on a political awareness through historical reference, sharing such similarities with Philip Guston’s excessive cartoonish figures, or the character, Dr. Plague by Dr. Schnabel in 1656.

In Mosquito Man #1 (congress), his own body is taken as both subject and object, forming an anthropomorphic figure, which casts an image that can be viewed as playful yet threatening.

Whilst some work, such as the “mosquito mask” in Study of Curiosity also takes the form of a sculptural piece, Roberto draws on his earlier experience as both a professional dancer and choreographer to explore the performative elements of sculpture.

On the opening night 1st December a performance by The Mosquito Choir will take place, sung by five children in the guise of Dr. Plague.

Roberto lives and works in London.