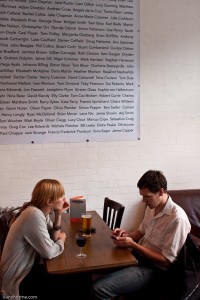 Russell Herron’s latest work “The Names of 500 Artists”, which can be seen on his website, features the names of 500 artists. I wasn’t too sold on the idea – I can find artists’ names anywhere online or in a catalogue – but after seeing it displayed on the wall of Whitechapel’s Rhythm Factory last month, and talking to the artist about it, the piece took on a life of its own.

It’s a development from Herron’s previous work, where he tried to establish his name as an artist by trying to establish his name as an artwork. Now the increasingly familiar words “Russell Herron” are hidden amongst 499 others. Artists are ordered by year of birth – the oldest at the top – and within years, alphabetically. There is a monotonous uniformity to the words which make up the names, spilling across the huge banner, like the end credits to a film: The History of Art in London. Starting with older artists, mainly well established, their place assured in art history. The lower you get, the more these are intersperesed with Herron’s friends, co-exhibitors, correspondents, hopeful new arrivals in the art world.

But the actual year of birth, that totem of curatorial labelling, is not shown. Some artists’ ages may be known, others can be guessed to within a few years, and these become reference points to the ages of the others. This, in turn, becomes a game of comparisons and jealousy: “he’s younger than me, and yet he’s so much more successful. Perhaps I’m too late to make it…”

Presumably the banner could extend upwards into the past, or down into the future with thousands of names of artists-yet-to-come, but we are presented just this one slice of history; a subjective (and, perhaps, slightly romantic) slice: all the names come from Herron’s memory. In this way it relates to the earlier blog he wrote: a year of networking and frenetically attending private views, followed by an act of memory as these small moments of contemporaneous art history are set down in words. It also fits in with Herron’s self-made role, with his weekly email newsletter, as the hub of London’s private views art schmooze network: artists’ names emerge from the soup of press releases, shows, emails, facebook invitations, dealers, galleries, studios, parties, walking through hackney on a thursday evening, … these are Russell Herron’s 500 artists. 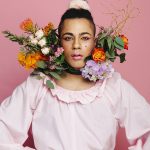 ALL THE WAYS WE COULD GROW: A season that re-imagines our lives outside the confines of genders

In the second of Free Word’s topically themed Seasons that explore the power and politics of words, All The Ways We Could Grow offers vital perspectives on a topic often repositioned as ‘new’ in current conversations, but which has existed throughout history.