* FADwebsite Does Futurism *; To celebrate the exhibition at Tate Modern from 12th June – 20th September 2009 - FAD Magazine
Skip to content 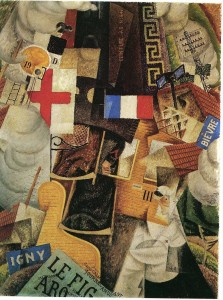 FADwebsite Does FUTURISM
To coincide with the launch of The Futurism show at The Tate Modern FADwebsite over the next couple of weeks will be posting some special content including; republishing the original Futurism manifestos, an interview with Matthew Gale, Curator of the show and Head of Displays at Tate Modern and a video tour of the exhibition so keep your eyes peeled.

This exhibition will be the first large-scale showing of Futurism in Britain in thirty years.
The movement set out to modernise Italian art and social attitudes and its influence spread across Europe and beyond, revolutionising the response to the dynamism of modern life. Its master of ceremonies was the poet Filippo Tommaso Marinetti and this exhibition celebrates the centenary of his publication of The Founding and First Manifesto of Futurism in 1909.

A core group of artists – Umberto Boccioni, Carlo Carrà, Luigi Russolo, Giacomo Balla and Gino Severini – pledged its enthusiastic adherence to Futurism and abandoned the art and culture from the past. The Futurists embraced a celebration of modern technology, speed, and city life and they often painted urban and industrial scenes. The fascination and experience of cars, trams and airplanes is frequently represented in their subject matter together with the use of bold and strident colours on the canvas.

Bringing together works from the groundbreaking Futurist exhibition of 1912 that began at the Galerie Bernheim in Paris and traveled to the Sackville Gallery in London and onwards across Europe, this exhibition will reveal the original impact of that show. The effect of Futurism on the Parisian avant-gardes was profound, and this show will examine the nature of that exchange as Cubism and Futurism became inextricably linked. It will also show the impact of the movement in Britain and Russia as it found a response in Vorticism and Russian Futurism.

Highlights of the exhibition will include: Umberto Boccioni’s sculpture Unique Forms of Continuity in Space 1913; Carlo Carrà’s Funeral of the Anarchist, Galli 1911; and responses to the challenge represented by Futurism in works such as Delaunay’s Eiffel Tower 1911; Jacob Epstein’s Torso in Metal from the Rock Drill 1913-14 and Picasso’s Pipe, Glass, Bottle of Vieux Marc 1914 onto which he pasted the Futurist periodical, Lacerba.

The exhibition will be accompanied by a fully illustrated catalogue. It is curated at Tate Modern by Matthew Gale, Head of Displays, Tate Modern, assisted by Amy Dickson, Assistant Curator, Tate Modern. The exhibition was devised by Didier Ottinger of Centre Pompidou, Paris where the show opened in October 2008. It travelled to Scuderie del Quirinale, Rome in February 2009 where it was curated by Ester Coen, a leading authority on the Italian avant-garde artists.

Win Tickets for the show at (The Times)