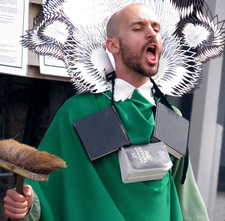 As part of the Futurism show at The Tate Modern Mikhail Karikis will be running a workshop called The Voice and Everything Else this Saturday. You might have heard of his recent rough trade album, his website is http://www.mikhailkarikis.com/ .

From speaking to gibbering, from whispering to roaring, from singing to yelling, the voice is more versatile than any musical instrument and more malleable than any material. However, its close ties with words put the voice under pressure for meaning.What do we hear in inarticulate voices? In voices that cannot speak, whose language we don’t understand or which have nothing to say?

This two-day workshop aims to explore the above questions by kick-starting with a look at the work of the Futurists.

The poet F.T. Marinetti was one of the first to mix words with non-verbal sounds in his recitations by sampling natural and mechanical noises with his voice. A similar obsession with noise shared by the Italian Futurists generated visual representations of sound.

After looking at sonically inspired Futurist paintings, participants will be guided through a listening session, a series of graphic notation and fun vocal exercises which will consider the relationship between sound and image, and launch a hands-on exploration of the voice.

The workshop will provoke thinking on the hidden meanings of vocal production, it will examine the voice as an emotional barometer, and uncover the strong political undercurrents suggested in the way something is voiced. It will conclude with an exciting group vocal performance – for those who wish to participate – which will bring graphic notations generated by the group and the sounds of selected Futurist paintings to life.More Info:www.tate.org.uk/
Tate Modern East Room £65 (£45 concessions), booking recommended
Prices includes entry to the Futurism exhibtion and refreshments
For tickets book online
or call 020 7887 8888.