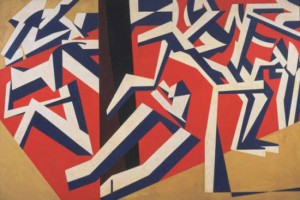 This exhibition coincides with the centenary of the first Futurist manifesto, how will audiences’ perception of this exhibition be coloured by current economic events 100 years later?

Putting together a big exhibition is inevitably a long-term business. The climate in which the work was conceived is quite distinct from the climate in which it is received now. The importance of Futurism itself within the broader avant-garde 100 years ago is going to outlive the current political and economic climate. People will see it and receive it within the context of disruptions across the economic spectrum and across Europe. But I think they will think ‘actually these people were engaging with a number of things that we are familiar with – what it is like to be a mass of people on the street or in a railway station.’

The Futurists were tapping into something deeper, a more physical response to the excitement of everyday life. All that is now much more common currency than it was then, so the exhibition is a reminder that they were the pioneers, bringing it into a modern language of painting in particular, but also literature, setting them apart at that moment.

Do you think the Futurists’ engagement with technology is something contemporary audiences will relate to?

As a historian I see Futurism as trying to convey some of the excitement of that moment. I think the audience will see those connections. Above their 1912 exhibition in Paris they had “Les peintres Futuriste Italien” written in neon, which had only just been invented and patented just months before. They were really there with the new technology, though they didn’t quite make it into neon sculpture. By 1915, people like Giacomo Balla and Fortunato Depero were making sculptures out of wire and bent metal that seem like work from certainly 60 years later, if not exactly contemporary with us now.

Would Futurism’s ideals have travelled well into the cinematographic medium, which had only recently become possible?

They did explore cinema. The real problem in looking back now is that none of the film survives. There are a handful of stills from a film called La Vita Futurista, that was made in 1915 and from those, it looks amazing. But there is not anything for an audience to experience beyond that. I have a great sense of frustration with this and hope that somewhere in a garage under an old Fiat is a copy of this film.

In the current Tate Magazine Claire Bishop and Boris Groys, discuss how the Futurists could be seen as Performance artists, as well as media provocateurs.

Marinetti gave brilliant recitations of his poems. And there are recordings that survive of his later performances. He gathered a group of like-minded poets and artists around him. In 1910 they started holding performances that were partially artistic, partially political and partially provocative, in most cases provocative. That was the blueprint for subsequent performances by other groups. It became a cycle of provocation and outrage.

The spectators had chosen to be at those performances, and to be outraged.

Many audiences had gone wanting to be provoked, because the Futurists’ reputation preceded them. They came armed with vegetables to throw at the people on stage. They must have known, you don’t go to the theatre with a bag of vegetables otherwise! 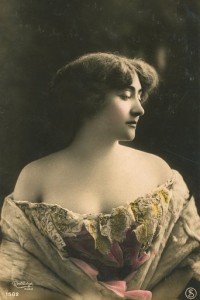 A key figure that is also often sidelined is Valentine de Saint-Point, there is a section devoted to her in this exhibition.

Valentine is a very interesting figure and there was a similar problem to the one of Futurist film, in that as a performer she is dealing with a time-based art that has disappeared over time. We are left with the photographs of her extraordinarily choreographed performances and the publications. Where she was setting a whole range of really challenging ideas.

She was an extraordinary person engaged with Futurism and performance but she also brings to mind all those other people that we hazily know about, that have rather drifted from focus. Isadora Duncan being a key figure, Mary Wigman another. These were people who occupied the stages of Europe and brought with them radical dance, lighting and all sorts of new advances.

It would be good to see a resurgence of Isadora Duncan.

Indeed, and the whole Duncan clan, the other dancers in her family and her brother who is renowned for adopting a Roman lifestyle, in thirties Paris, walking around in a toga.

The exhibition includes Futurist publications. These are important in opening up to today’s audience how the Futurist manifestos would have been received at the time.

We wanted to do two things, first of all to make sure we had the words of the manifestos within the space. In two of the rooms we have placard size manifestos, which in a subliminal way referred to how the manifestos were pasted up when they were first issued. Famous stories of Marinetti throwing his manifesto against Venice from the clock tower in Piazza San Marco, distributing other manifestos from the back of a taxi in Berlin. He was a man who could tap into eye-catching ways of doing things, so not only the content of the manifesto, but the idea and the controversy around it caught people’s imagination.

Also to include a room of a variety of archival material, the different sorts of applications that Marinetti himself produced. Marinetti was a genius of self-promotion and the promotion of Futurism. He wrote a manifesto on how to write manifestos. He turned manifestos into an art form.

It clearly helped that he was relatively affluent, though he was not a dilettante. His wealth allowed him to provide some support for the artists. In the photograph we have of them, all looking rather well dressed in winter coats, it being February in Paris, I would imagine that Marinetti bought the coats. We have a sense that Futurism was somehow flashy, but behind that there was grinding poverty for a lot of these artists.

Marinetti’s buying of coats for the artist, shows his role as the master of ceremonies, promoting his artists as much as self-promotion, constructing an image for the art movement in a way comparable to Andy Warhol.

The parallel with Warhol is rather a good one. Marinetti put himself forward more than Warhol notoriously did. Though he was distinct in allowing the painters and sculptors to do their own thing. He promoted and honed their activities, he edited their manifestos to make them punchy and made sure they were translated into multiple languages for distribution across Europe.

What is your opinion of the Futurist Cookbook?

Notorious for its condemnation of pasta! I remember a recipe called Dolce Mafarka, which involved espresso and rice pudding, which could be quite exciting, though I have a feeling it also included ball bearings, which is perhaps a step too far.