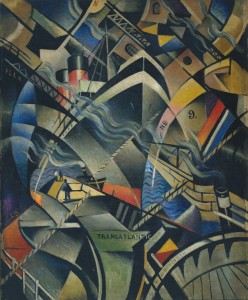 1 We intend to sing the love of danger, the habit of energy and fearlessness.
2 Courage, audacity, and revolt will be essential elements of our poetry.
3 Up to now literature has exalted a pensive immobility, ecstacy, and sleep. we intend to exalt aggressive action, a feverish insomnia, the racer’s stride, the mortal leap, the punch and the slap.
4 We affirm that the world’s magnificence has been enriched by a new beauty : the beauty of speed.A racing car whose hood is adorned with great pipes, like serpents of explosive breath – a roaring car that seems to ride on grapeshot is more beautiful than the Victory of Samothrace.
5 We want to hymn the man at the wheel, who hurls the lance of his spirit across the Earth,along the circle of its orbit.
6 The poet must spend himself with ardour, splendour, and generosity, to swell the enthusiastic fervour of the primordial elements.
7 Except in struggle,there is no more beauty. No work without an aggresive character can be a masterpiece. poetry must be conceived as a violent attack on unknown forces, to reduce and prostrate before man.
8 We stand on the last promontory of the centuries !…Why should we look back,when what we want is to break down the mysterious doors of the impossible? Time and Space died yesterday. We already live in the absolute, because we have created eternal omnipresent speed.
9 We will glorify war – the world’s only hygiene- militarism ,patriotism, the destructive gesture of freedom-bringers, beautiful ideas worth dying for, and scorn for woman.
10. We will destroy the museums, libraries, academies of every kind, will fight moralism, feminism, every opportunistic or utilitarian cowardice.
11. We will sing of great crowds excited by work, by pleasure, and by riot; we will sing of teh multicoloured, polyphonic tides of revolution in the modern capitals; we will sing of the vibrant nightly fervour of arsenals and shipyards blazing with violent electric moons; greedy railway stations that devour smoke -plumed serpents; factories hing on clouds by the crooked lines of their smoke; bridges that stride the rivers like giant gymnasts, flashing in the sun with glitter of knoves; adventurous steamers that sniff the horizon; deep-chested locomotives whose wheels paw the tracks like the hooves of enourmous steel horses bridled by tubing;and sleek flight of planes whose propellers chatter in the wind like banners and seem to cheer like an enthusiastic crowd.
The Work (Futurist Manifestos, edited by Umbro Apollonio (Tate Publishing, 2009))