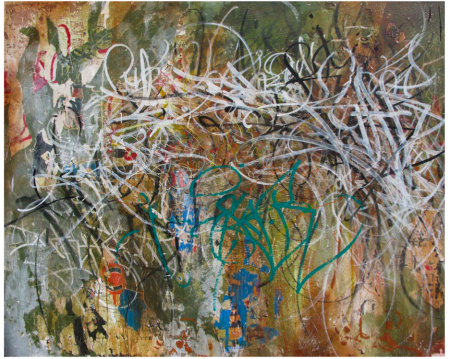 Ooi Botos Gallery is pleased to announce Reading through Seeing, an exhibition by contemporary artist Jose Parla, on view 14 May through 11 July 2009. This will be the artist’s first solo exhibition in Hong Kong and will showcase new paintings, works on paper, photographs and ceramic works. The exhibition will take place during Art HK 09 and will be accompanied by a fully illustrated catalogue with essays by scholars Alexandra Chang of New York University — Asia Pacific Center and critical theorist and art historian Michael Betancourt. An artist talk by Jose Parla will be co-hosted by The Pawn on the 16th of May 2009. In conjunction with ART HK 09, The Pawn is hosting a series of art related VIP events from the 15th of May through the 17th of May 2009.

Jose Parla’s new works are inspired by his recent travels in France, Japan and the United Kingdom. Parla’s unique and playful inscriptions and diary-like gestures with his trademark hand–writing recall his personal observations of how the idiosyncratic behavior of anonymous individuals on those distant streets distinctly impact each geographical environment.

The complexity of Jose Parla’s mixed media paintings is based on the layering of images and paraphernalia collected from his daily encounters at home and his adventures abroad, interpreted through his dynamic gestural process. Interleaved through each work is Parla’s calligraphic script, which infuses each piece with vibrancy, energy and meaning.

Memories, thoughts, ideas, quotes, phrases, conversations and observations scrawled in Parla’s instantly recognizable, flowing script reflect his characteristic fusion of writing and painting, word and image. His brushwork depicts walls in the city, or in rural areas outside of urban centers, while his mélange of imagery and words hint at stories within stories, an evocation of the places that have deeply affected him.

Jose Parla is a New-York based artist whose paintings reflect the way in which cities function as palimpsests. Born in Miami, Parla traveled in the Caribbean, South America, Asia and Europe in the 1990s before settling permanently in New York. His work has been collected and exhibited by Agnes B. Galerie Du Jour in Paris and Takashi Murakami’s Kai Kai Ki Ki gallery in Tokyo. Major recent exhibitions include, The New Grand Tour showing in Hong Kong and Beijing (2007-08), Adaptation / Translation at Elms Lesters Painting Rooms in London (2008), and Layered Days with Cristina Grajales’ Soho gallery in New York City (2008).

Ooi Botos is Hong Kong’s leading avant-garde gallery specializing in photography, digital media, video and installation. In fact, the Jose Parla exhibition marks a departure from Ooi Botos’ customary program, with Parla being the only painter represented by the gallery. Ooi Botos is dedicated to exposing the public to art forms rarely seen in Hong Kong to raise the level of discourse about art in Asia.