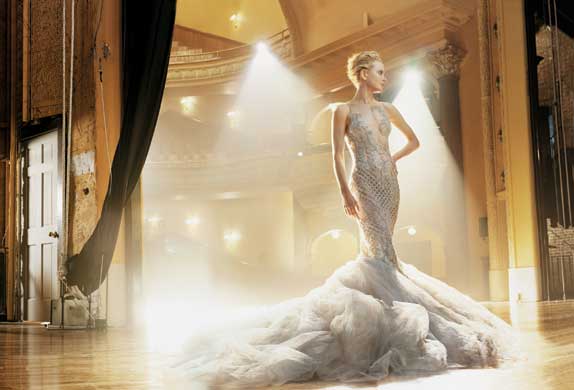 Annie Leibovitz: A Photographer’s Life, 1990-2005, an exhibition of more than 200 photographs, debuts at the Brooklyn Museum, where it will be on view through January 21, 2007, prior to an international tour. Among the other venues to which it will travel are the San Diego Museum of Art, the High Museum of Art, the Corcoran Gallery, the De Young Museum, Maison Européenne de la Photographie in Paris, and London’s National Portrait Gallery, with additional venues to be announced.

Annie Leibovitz: A Photographer’s Life, 1990-2005 has been organized by the Brooklyn Museum and is sponsored by American Express. Additional support has been provided by Richard Meier’s “On Prospect Park,” an SDS Procida Distinctive Property.

The material in the exhibition, and in the accompanying book of the same title, which will be published by Random House, encompasses work Leibovitz made on assignment as a professional photographer as well as personal photographs of her family and close friends. “I don’t have two lives,” Leibovitz says. “This is one life, and the personal pictures and the assignment work are all part of it.” The material documents the birth of her three daughters and many events involving her large and robust family, including the death of her father.

Portraits of public figures include the pregnant Demi Moore, Nelson Mandela in Soweto, Jack Nicholson on Mulholland Drive, George W. Bush with members of his Cabinet at the White House, William Burroughs in Kansas, and Agnes Martin in Taos. The assignment work also includes searing reportage from the siege of Sarajevo in the early 1990s and a series of landscapes taken in the American West and in the Jordanian desert.

The exhibition will be installed in three sections. An introductory gallery will include exuberant photographs of subjects free from gravity, among them dancers, divers, and an airborne stealth bomber. The main gallery will include a chronological presentation of the fifteen years covered by the exhibition, in which personal photographs mingle with commissioned works. The final gallery includes eight large-scale landscapes.

One of the most celebrated photographers of our time, Annie Leibovitz has been making witty, powerful images documenting American popular culture since the early 1970s, when her work began appearing in Rolling Stone.

She became the magazine’s chief photographer in 1973, and ten years later began working for Vanity Fair, and then Vogue, creating a legendary body of work. In addition to her magazine work, Leibovitz has created influential advertising campaigns for American Express, Gap, Givenchy, The Sopranos, and the Milk Board. A retrospective of her work from the years 1970 to 1990 was presented at the National Portrait Gallery in Washington, D.C., and at the International Center of Photography in New York.

Victoria Miro is to show its fourth solo exhibition with Grayson Perry.The Vanity of Small Differences

1 When did you start to make art? From my beginning. 2 How did you evolve into a professional artist? […]