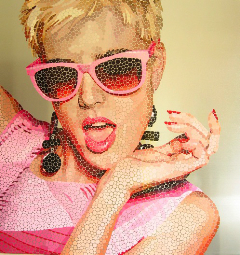 The Gallery At 94 follows up its launch show with It’s Art… Bitch! a high impact exhibition that sees fashion, culture and art collide in truly innovative and shocking ways. It’s Art… Bitch! features painter Paul Normansell, artistic duo DORMICE© and sculptor Mikael Alacoqué, who will display their exceptional pieces in order to showcase just what the elite rising stars of today have to offer the contemporary art scene.

PAUL NORMANSELL
Paul Normansell’s eclectic body of work experiments with colour and illusion. Combining fashion and pop art influence, his enterprising collections include portraits of Agyness Deyn and Kate Moss. Selected by American rock band The Killers, to create the artwork for their new album ‘Day & Age’ will be released November 25th. Paul has also included album protraits of the band members themselves.

DORMICE©
Fusing their dynamic creativity, Heinrich Nicolaus and Sawan Yawnghwe form the artistic duo DORMICE© . Born in Munich and Burma respectively, they live and work in Tuscany and their compelling use of colour and form has been inspiring collectors such as Leonardo DiCaprio over the last decade.

MIKAEL ALACOQUE
Bursting onto the sculpture scene with an injection of colour and hilarity, Mikael Alacoqué’s gloriously kitsch pieces exhibit the very worst of low culture. From skull-faced Terriers with ice cream cone horns to umbilical-corded babies exploding from Can-can dancing Hitler soldiers, no cultural icon is safe from this provocative sculptor.

It’s Art… Bitch! brings together the explosive talents of these hot artists at The Gallery At 94’s exciting second show, running from 14th November to 4h January 2009.

About The Gallery At 94
The Gallery At 94 is the newest contemporary art gallery to open in the heart of London’s fastest growing art scene, Fitzrovia W1. Launching in October with its exciting first show, In Between Dreams (17th October – 11th November 2008), showcasing two great dreamers, sculptor Thomas Ostenberg and etcher Mila Judge-Furstová, The Gallery At 94 is the premier place in London to discover the most diverse, controversial and talented rising stars in the art world. 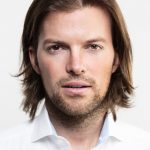 Leonardo DiCaprio joins as an advisor to the “Shazam for Art” Magnus.

Magnus, the app dubbed “Shazam for Art”, today announced it has closed a Series A investment round from a group of investors, including Leonardo DiCaprio, who also joins as an advisor to the company. 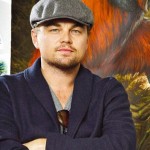 Daniel’s Value and Ideas #89: The Collector Who Cried Wolf

Leonardo DiCaprio has joined the ranks of the world’s top art collectors..

Somebody offer’s a selection of approximately 40 works by and about celebrated figures in the worlds of art and popular culture.